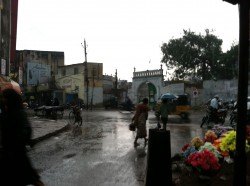 Call me an idealist, call me an American… today was a day full of magic and one I will never forget. It’s the kind of day that a so-called “humanitarian” dreams about. It’s the kind of day that is a mystery, is tough, is an adventure, but it’s what makes it all worthwhile. This afternoon I journeyed to the part of Hyderabad where Charminar is located. Charminar is a mosque and monument that was built in 1591 CE and is the kind of place that draws you in…draws you into its sights, smells, and esoteric charm.
I went to Charminar to meet with a certain individual who is a hero in the world that is fighting against human trafficking and specifically against sexual slavery. She is one of those rare individuals you meet who had something unimaginable happen to her and rather than becoming bitter and angry, she allowed it to catalyze a movement of change; change to empower others and give them the freedom and dignity they deserve.
During our meeting she received a call from someone in the media asking her to comment on an incident that had occurred in the last few hours. As I sat there hurriedly jotting down notes from our conversation, I couldn’t help but overhear what she was saying. Her words were eloquently spoken with an undeniable boldness. There is no question why this woman has such an influence and is so powerful in what she does. I suddenly stopped taking notes as I realized this was the real thing. This was the on-the-ground, true-to-life perspective I’d dreamt about hearing.  She spoke of how we are creating a culture of apathy and impunity, a culture of violence with no fear or shame. Her words shaming the discrimination of the women in the village who have no voice because the community only cares about the victims of the middle class and IT professionals was undeniably moving. She asked the individual on the other end of the line, “How are we part of this?”
This experience is just one example of the magic of India. When you live in India, each day awakens with a different possibility. One single day can bring joy, tragedy, laughter, and sorrow. One day brings traffic jams and pouring rain while hastily bargaining for an auto, while another brings beautiful parks filled with peacocks, a new found treasure hidden in a shop, and a chai with a new friend from Kashmir. I have been here almost two months now and am so excited for the upcoming opportunity to serve, learn, and lead in this country of passionate, determined, and strong people called India. 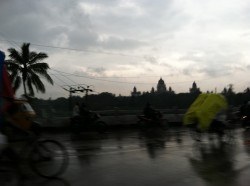 Gabrielle's passion for international public health began during a summer spent in South African townships, where she taught HIV/AIDS prevention to middle and high school students. She subsequently studied the language and culture of isiZulu as a Fulbright Hays scholar at the University of Natal, attempting to gain an understanding from the Zulu people of how HIV/AIDS impacts the individuals and their communities as a whole. Her education and professional experience lie largely in the areas of health promotion with an emphasis on HIV/AIDS, water and sanitation issues, and human rights. In addition to interning with UNAIDS in Dakar, Senegal, she was recently a Field Manager with the LifeStraw Carbon for Water campaign in Western Provinces, Kenya. Outside of work she is an avid reader, a classically trained opera singer, and enjoys running and watching sports. Gabrielle is thrilled to come to India as a Clinton Fellow, and is looking forward to expanding her knowledge of public health innovations in such a vibrant and entrepreneurial environment. She will be working with Healing Fields Foundation, an Ashoka Fellow led organization recognized for its pioneer work in the areas of health financing and community health education based in Hyderabad, Andhra Pradesh.