Charging towards the defender with the ball, she drags back the ball with her right foot as she approaches the defender closer, simultaneously turning herself around the defender. As she turns 360 degrees to face the goal again, she pulls back the ball from her left foot insole, towards her strong right leg and shoots the ball into the top corner of the goal – the Marseille turn. Just another day at training for this 13 year-old kid.

Khushi was born in 2003, in Purnia district of Bihar. She had to migrate with her family to Delhi when she was just a year old, when their shop in Bihar was robbed, rendering them penniless. In Delhi, with the aid of their friend, they were able to rent a small room in the slum of Vikaspuri, where they are currently residing. Unable to understand or discuss the personal issues at her house, compounded by the abuses of her father, Khushi slowly got dragged towards the darker side of the slum environment.

Meanwhile a few yards outside the slum, a guy named Sylvester Peter was engaging his apartment kids in football every evening. Some kids from the same Vikaspuri slum used to wander out to curiously watch Sylvester and the football. Slowly, they joined in and in a couple of years Sylvester Peter, fulfilling his childhood dream, officially started My Angels Academy for holistic development of slum kids with a special focus on football. Similarly to these curious kids, my friend and I had also noticed Sylvester and his kids play football from a nearby rooftop apartment since 2013, and had wondered who they were. On an early British morning in July 2016, while I was traveling in the U.K., I had a Skype call with an organisation that the American Indian Foundation had selected to host me for my Fellowship. As it turns out, the person on the other end of the call was Sylvester Peter, the same person who I used to watch from my friend’s rooftop a few years back! Thus my journey with My Angels Academy started.

One of his students introduced Sylvester to Khushi in 2009. Her first visit, as Sylvester recalls, reminds him of an angry, dusty girl unafraid of countering anybody, either physically or verbally. Today, a smiling face and a humble voice are what Khushi greets everyone with. Has she lost all her aggressiveness? It is probably this very aggressiveness which Sylvester has channelised into her dominance with the football and on the pitch.

In 2015, Khushi visited Jawaharlal Nehru Stadium with the My Angels Academy girls team, as a part of a tournament match. Little did Khushi know that they would be facing a college girls team that day. Though the organiser was reluctant at first, they were finally allowed to play the game with an assumption that the result would be obvious: the college girls team was surely to win. Nobody expected this little girl to trounce with the opportunity to score the winning goal for My Angels Academy! But she did, and since then Khushi has played in U-9, U-11, U-13 and with the girls senior teams! 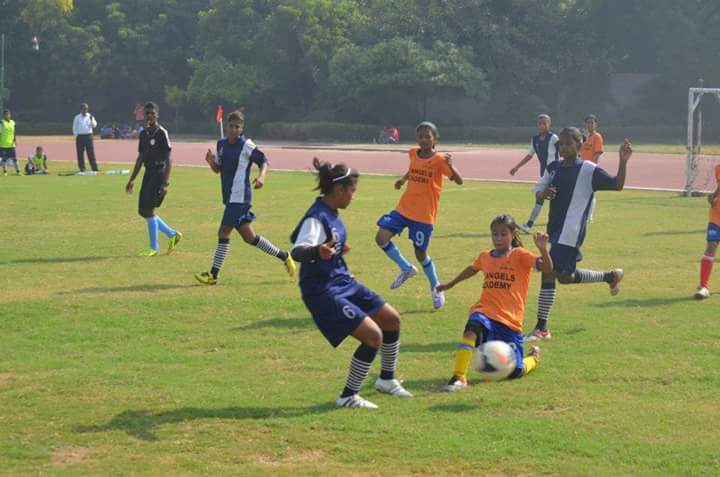 Today, Khushi wakes up at 3:30 AM in the morning and trains until 6:30 AM with the My Angels Academy team. After training, she reluctantly goes to school which she tries hard to skip, in favour of playing more football. Post schooling, she helps her widowed mom with her work and in taking care of two younger sisters and a younger brother. Later in the evening, she helps in administrative work of My Angels Academy.

Her footballing accolades need no explanations: she has played over 50 matches and scored over 40 goals, she has won most “man of match” awards in the last year’s Delhi Youth League. People who have watched her, from curious onlookers to senior officials at AIFF (All India Football Federation) agree that it would be India’s loss if Khushi does not get an opportunity to fulfill her dreams to represent India. Hardly any family income to support her ambitions, Khushi plays with worn out shoes and wears the same ONGC sponsored jersey from two years ago, as does any other kid at My Angels Academy. But learning mostly from Sylvester and by watching her senior boys and girls team play, Khushi is unafraid of any challenge on the football field.

What she is not in control of, however, are the challenges outside the field. With the unavoidable demolition of the slum along with lack of better opportunities of playing in more tournaments, lack of availability of new equipments and state of art facilities, and of course lack of funds – there are a lot of odds stacked against Kushi’s dream. Sylvester and My Angels Academy mentors over 130 slum kids in football, yoga, dance, and education. He has done this for over 15 years, mostly with his own finances, so My Angels Academy is in dire need of more support from public and private enterprises. This support could finally enable Khushi’s dream to be accomplished along with the dreams of the other 130 kids. As Luis Suarez wrote in his autobiography¹, “It’s not that I want to win, it’s that I need to win.” For Khushi and My Angels Academy there are no other alternatives. We, on the other hand, do have alternatives. Should we choose to act now or should we wait until another TV debate on how a girl with no financial support triumphed against all odds to represent India? The choice is ours.

Nitish is excited to be back in India, realigning his personal and career ambitions towards integrated development of rural India. Working in motorsports, over the last 5 years has provoked him to ponder on how machines are developing faster than humans. His keen interest and work in field of sports has led him believe that sports could be one of the essential and critical tools to bring about a social change in India. Using sports as a catalyst to bridge the social divide in India has become one of his personal ambitions. He has founded a social enterprise - Bridges of Sports which is developing a sustainable sports ecosystem in India. Before he embarks on this journey, he is keen to be part of the AIF fellowship to garner ground experience and understand the problems, interacting with the community who are helping solve issues in relation to education and sports in India.

3 thoughts on “A Possibility Named Khushi”