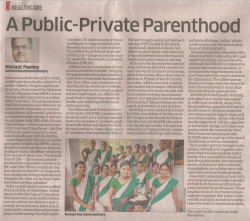 India accounts for about 25% of the world’s newborn deaths, and 22% of under-5 deaths. Despite significant progress, it has missed the Millennium Development Goal (MDG) 4 on reducing under-5 mortality as well as infant mortality. The global Sustainable Development Goal (SDG) for child mortality represents a renewed commitment to the world’s children: to end preventable deaths of newborns and under-5s by 2030, with all countries aiming to reduce neonatal mortality to at least 12 deaths per 1,000 live births and under-5 mortality to at least 25 deaths per 1,000 live births.

According to the ministry of health and family welfare (MoHFW), about 26 million babies are born to India annually, of which 730,000 die within the first month of their lives. The first 28 days of life – the neonatal period – are the most vulnerable time for a child’s survival. What remains an urgent concern is that 80% of these newborn deaths are both preventable and treatable. So, what can be done to prevent these newborn deaths?

India’s public health system suffers from a variety of challenges, including an acute shortage of trained medical personnel, poor health infrastructure and service delivery (particularly in rural areas), and a lack of community ownership and partnerships in addressing abysmal health outcomes. To address some of these challenges, Gol appointed 8.9 lakh female community health workers, ‘Accredited Social Health Activists’ (ASHAs), in villages across the country under the National Rural Health Mission (NRHS).

ASHAs are the cornerstone of maternal and newborn health, bridging the gap between the public healthcare delivery system and the communities. Now, a five-year pilot project in Jharkhand has shown how ASHAs, when appropriately trained, supported and supervised, can effectively contribute to improving maternal health and reducing newborn and child mortality.

The Maternal and Newborn Survival Initiative (MANSI), a community-focused health intervention that addresses the problem of access to quality and affordable healthcare for mothers and newborns close to their place of residence, was launched in 2009-10. Piloted through a public-private partnership (PPP) model in Seraikela, Jharkhand, MANSI is a simple, but effective, set of home and community-based interventions relevant and practical in a low-resource setting.

At its core lies the empowerment of local ASHAs so that they can save lives of newborns in remote rural areas, often tribal areas, where there are no doctors or Primary Health Centers for miles. ASHAs received training and mentoring in simple life-saving interventions for maternal and newborn health covering the antenatal period, the time around birth and the first month of life, as well as care for small, sick newborns and children.

Covering a rural, and predominantly tribal, population of 83,000 across 167 villages in Seraikela Kharsawan district, the MANSI pilot achieved significant results. An external evaluation of independently conducted qualitative findings reflected quantitative findings, both of which confirmed across-the-board reductions of child mortality.

MANSI provided quality training, refreshers and mentoring support to ASHAs of the block, along with hand-holding support to the district health team of the government for strengthening the supply chain and incentive systems. Along with building the capacity of ASHAs, significant behavior change activities were conducted at the community level. With these encouraging results, MANSI aims to scale up to the rest of Jharkhand, as well as nationally.

Each project partner brought in its unique strength and, together, achieved what was beyond them individually. It is a successful example of how the public sector, the corporate sector, civil society and a technical organization can collaborate to address a key national health problem.

Especially remarkable is how GOI’s own program and workers benefited from both the nonprofit private sector and the for-profit sector. These lessons can be of enormous value to state governments that want to reduce child mortality, as well as to corporates who wish to contribute socially.