“A woman must have money and a room of her own if she is to write fiction.”

― Virginia Woolf, A Room of One’s Own

During late February this year, I was approached by an acquaintance with an offer to write a piece on women in India for a publication he edited. This was in light of International Women’s Day, celebrated annually on the 8th of March. I was enthusiastic in my acceptance of this offer, egregiously underestimating my potential for writer’s block and dawdling.

I instantly knew I wanted to write on women in Indian agriculture. Now, I’m by no means an expert on agrarian women’s issues. Apart from the little work I’ve done academically on rural narratives, I had no knowledge reserve from which I could draw. Mind you, even in the little amount of rural narrative works I had been familiar with, there was astonishingly little written about agrarian women. The fault, of course, is in me and my lack of reading ethic. It’s curious, after a day of report writing and fighting spiders, one just wants to unwind over some Modern Family, and L’ecriture Feminine (thank you, undergrad Literary Theory classes) – just seems too much, you know?

However, banking on procrastination, as I always do, I tucked away my impending writing responsibilities and proceeded to procrastinate with more immediate responsibilities like my fellowship project. Like many in the development (or any) sector may understand, fruition of project deliverables is susceptible to vagaries of funding, resources – human and otherwise – and more often than not, personal whim of those around you. This means that one must always be prepared for curious tasks on days one expects it the least.

This is how I found myself on a sunny February day, chopping Malta fruit with a group of Kumaoni women.

February and March marks the advent of fruiting season in the Himalayan foothills that form the Kumaon valley. The season starts with a huge production of Malta fruit (a type of citrus not unlike orange) and proceeds to vast productions of peaches, plums, apricots, and apples in the latter half of May and June. What’s visually glorious about this season is watching the terraced lands of the mountains spring into brilliant plumes of pink and white. For instance, I never realised that the haggard looking trees by my office were actually peach and plum until I saw the lovely peach blossoms blushing pink, not unlike me when I catch myself thinking about how beautiful my co-fellow in Darjeeling is, as I often do.

Gene Campaign had decided to maximise on the fruiting season by making Malta Marmalade with the help of local women farmers. This was to serve both as a training session for women as a preamble to the millet value chain, and to test the local market for urban consumers as there’s a burst of tourism from across India and abroad this time of the year.

The session involved several hours of peeling and quartering almost 20 kilograms of Malta fruit, boiling the fruit with pectin in a huge aluminium vessel, over a low fire. Cooling it overnight, and bottling it. Yet another testament to resourcefulness in the development sector: we did all of this over three days, with resources acquired via community networks, and among just five of us. We made around 150 bottles of marmalade.

What I gleaned out of this exercise was more from the conversations I had with the women farmers than the actual technicalities of citrus chopping. As we were pulverising the fruit, I talked to them about their experiences as women farmers. They were initially very self-effacing about it all, but as the heap of Malta pith rose, the conversation deepened.

I asked them about the women carrying huge bales of hay on their heads and how I’ve only noticed women doing this. I asked them what kind of agrarian tasks they did and if men did the same tasks as women. They told me that they did most of the physical labour, but the men helped too. They felt that there wasn’t an unequal distribution of tasks, though admittedly, they did do most of the heavier drudge work. They also said that the physically challenging work was done by men, but women helped as much as they could. However, one of the women made a point that stuck with me and inspired my Women’s Day piece:

“The men do much of the work too, of course… We do the tilling and harvesting, they help with their tractors and some of the more physically challenging work, I would say that the work is shared equally in most cases…  But it is only the men that take the produce to the market. They decide the sale price and this is the way it has always been. Of course, they share the income with us, but maybe it is time for women to go to the market too? Who knows, if one of us goes maybe it will start something. We should have the option, at least.”

This illuminated to me one of the many real experiences of being an agrarian woman in India. A route: an economic, symbolic, and yes, a physical route for oneself, to the market, the city, and towards choices. The women I spoke to were extremely enthusiastic at the thought of being entrepreneurs, it wasn’t much to do with the fruition of the hard work that they were so used to; it was more about increasing options (and routes) for themselves and their children.

My conversation with them reminded me of the Virginia Woolf quote cited above. The quote is fairly straightforward but the interpretations are so many. Economic independence has been an imperative platform in many women’s liberation movements. A room of one’s own is perhaps more than a need for space, perhaps a right to ownership. For the women farmers of Kumaon, this could resonate in a route to the market and the opportunity to control how, where, and to whom they want to sell the fruits (if you will) of their labour: A route of one’s own. 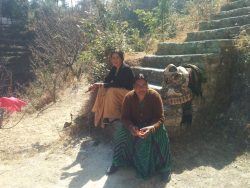 One thought on “A Route of One’s Own”