For those who don’t know, the Mumbai local train system can be described as an adventure at best, and terrifying at worst. 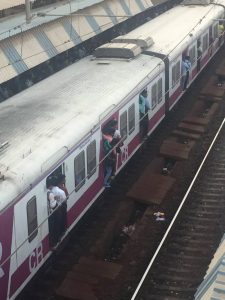 Unaccustomed to one of this city’s favorite modes of transport, my first month or so was plagued by major faux pas on the train – namely, my continued utterance of “excuse me” and being unwilling to encroach on someone else’s personal space (or relinquish my own). Taking this train twice a day during rush hour required me to go out of my comfort zone, and fight for space. I had to push my way in, on, and off the train in order to make it anywhere. My first few months were characterized by my waiting for two to four trains to pass because they were too crowded and I had yet to be brave (or skilled) enough to hang off of the side. I questioned myself often how I was going to adapt enough in the short ten months to become better at taking the local train (and not get yelled at for moving too slowly).

In my first few months of the Clinton Fellowship, I used the term “awareness” approximately 6,742 times (give or take a few). At our Midpoint conference in January, I was able to gather once again with people who – although they were complete strangers a few months’ prior – were having similar experiences to me working in the development sector in India. It wasn’t until I was around this amazing cohort once again that I realized why this phrase had appeared unintentionally (yet often) in my speech pattern.

“Do you think you’re afraid?” a co-fellow asked.

We were speaking of something completely unrelated, but in that moment I realized that yes, I was afraid. Oddly enough, I wasn’t afraid of new people or places or Delhi Belly (ok, I wasn’t that afraid of Delhi Belly); two out of the three aforementioned things actually excited me. Rather, I was scared of my own potential to do unintentional harm. Moreover, I was afraid to stand still and unintentionally not learn from any harm I was doing. As such, I’d been using the term “awareness” almost as a crutch, to make myself seem less threatening; to convince myself and others that I was aware and that I would know if I was doing something wrong. This phrase popped up most often when I spoke to friends (old and new) about my place working in India as an American, and as a young person when interacting with older colleagues.

The thread was clear: I didn’t want to take up space. In my desire to be effective and do good work, I was shooting myself in the foot by subconsciously believing that I wasn’t allowed to be here, and that I shouldn’t be.

When I first came to India, I prided myself on having no expectations. No expectations about what my project would be, what the Fellowship would be like, or how I’d fit in in my host community. Now I realize that while I didn’t have expectations of my surroundings and the people I interacted with, I had high expectations of myself, namely to not struggle – and if I did, not show it. I couldn’t put a “why” to these feelings until a few months ago when I was on a train from Alwar to Delhi during AIF’s annual Midpoint conference. As I was speaking to AIF’s Fellowship Director, Katrina Dikkers, I caught myself apologizing profusely for things that didn’t require an apology. We spoke about my placement, how I’ve been adjusting, and then she caught me off guard and said something that was exactly what I needed to hear. As ironic as it may be, she gave me the permission to take up space. She urged me to make my space in my host organization, in my community, and in my life; to not make myself smaller – as women are so often trained to do – solely to make others feel bigger.

Those high expectations I had put on myself before were due to my unwillingness to make space for myself – space to fail, and space in the varying communities I’ve been a part of. As her message sunk in, I thought to myself sarcastically “ah, how fitting that I take this new lease on life after I’ve already been working with women’s empowerment organizations for three years.” But in this case, I decided the philosophy “better late than never” must be taken, and instead of looking back, I’m moving on.

I want to be here, and I can be. I’m moving through life and I will make mistakes, as well all do. But I’m going to continue to grow, learn, and try to return an ounce of what my gracious host community has given me.

Hailing from the small suburb of Ossining, New York, Akiera knew from a young age that she did not want to settle down in a mundane locale early on in life. That mindset led her to Boston, where she attended Northeastern University in 2013. Northeastern has a co-op program that provides students with 6-month opportunities (up to three times throughout their undergraduate career) to pursue full-time work positions in their field of interest. Having worked at a local health improvement NGO and a government agency, she decided prior to her senior year that it was time for her to go after her interest in sustainable international development, despite her fears of not having the correct toolkit. During undergrad, she immersed herself in research across a wide variety of social impact sub-disciplines: from human trafficking to drug abuse to sexual violence. Public health emerged as a common thread amongst all of her studies. In 2016, she traveled to Kenya to work with a NGO in Nairobi to evaluate the effectiveness of a sexual gender-based violence (SGBV) resource tool the organization had developed to be put to use in an informal settlement. Later that year, she also worked in a consultant-capacity in Cape Town, South Africa with micro-entrepreneurs that had designed a business to create a foundation for social connections and employ refugee women from other African nations.