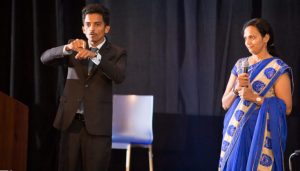 BOSTON– The American India Foundation raised over $850,000 at its New England fundraising gala in Boston to support its charitable work in India. The AIF annual gala was held at the Renaissance Hotel in and attended by close to 400 people.

“We are all so proud that we raised over $850K at this year’s event,” said AIF Gala Co-Chair Kim Shah. “On behalf of everyone at AIF, I would like to thank all the people who helped make the event a great success – the attendees, the sponsors, the caterers, the entertainers, the A/V staff, the volunteers and especially our VIP guests (Suma and Darshan) who had flown all the way from India to be with us and dramatically demonstrate the good work that AIF supports in India.”

This year, AIF also did something different. It brought ROOH, an Indian-inspired restaurant and cocktail bar from San Francisco, to cater food for its gala, which was held on March 31. It also went high tech and for the first time used a mobile auction app to auction art work. 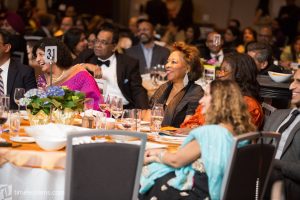 The AIF Gala’s theme for 2018 was Connect: Connect with a cause, Connect with ideas, Connect with the community. The event was emceed by comedian Rajiv Satyal, and co-chaired by Kunjan Anjaria & Vikram Mahidhar and Asha & Kim Shah. Performing artist and budding  Indian-American singer and songwriter Avanti Nagral was the performing artist of the evening. 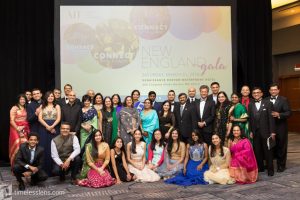 Founded in 2001, AIF is committed to catalyzing social and economic change in India, and building a lasting bridge between the United States and India through high-impact interventions in education, livelihoods, public health, and leadership development. Working closely with local communities, AIF partners with NGOs to develop and test innovative solutions and with governments to create and scale sustainable impact. AIF’s programs emphasize inclusive models that focus on the unique needs of girls and women to achieve gender equity as a basis for sustainable change.

AIF was formed at the initiative of President Bill Clinton following a suggestion from Indian Prime Minister Vajpayee. AIF has impacted the lives of 3.1 million of India’s poor by providing access to high-quality education, formal sector employment for urban youth and rickshaw drivers, and public health services to protect the health of mothers and their children, while building the next generation of global leaders through service. With offices in New York and California, eleven chapters across the U.S., and India operations centered in New Delhi, AIF is transforming lives across 23 states of India while addressing these issues on a regional, country, and international scale. President Bill Clinton serves as Honorary Chair and former Ambassador to India Frank Wisner chairs the Advisory Council. Learn more at www.AIF.org. 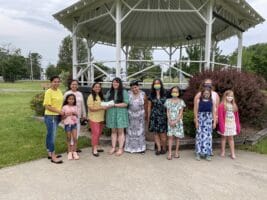