A smoothly planned gala fundraiser for the American India Foundation was briefly “occupied” Mar. 29 by an anonymous activist, but AIF organizers — and the recipients of the crowd’s largesse — got the last word in.

“This is bulls—! F— capitalism!” shouted a man near the back of a Hilton ballroom in the middle of an auction during the AIF’s annual Bow Ties & Bangles event.

Auctioneer Eric Johnson was unfazed by the disruption. “Anyone want to show this man what capitalism can do?” he shouted, as he whipped up the 600-strong crowd to bid even higher on items such as a first-class trip to London and a sky-diving adventure.

This year’s gala raised $1.4 million, which will go to support AIF’s wide range of programs, including the O3 project, a partnership between the U.S. Department of State and the AIF that brings arts and activism education to more than 3,000 students and 100 teachers in Punjab and elsewhere.

AIF co-founder Lata Krishnan, an Indian American entrepreneur, noted, “As we gather here each year, we always focus on deliverables. But now I want you to think about the impact of AIF — not just about the amount of money raised, but instead about the number of hearts and minds we’ve uplifted from the depths of hopelessness.”

Girls and women were in the spotlight at this year’s AIF gala, as three bright and talented young women from India spoke about the dramatic changes in their lives since being involved with two of AIF’s most productive programs, Digital Equalizer and Market Aligned Skills Training, or MAST.

Umayal Lakshmanan is a 15-year-old student at Ambattur Government Girl’s School in Chennai. Working with her high school teacher, science educator Bharathi Chinnaraj, Lakshmanan, the daughter of a waiter and a stay-at-home-mom, had always wanted to go to private school but her father’s Rs. 3,000 per month income made it impossible. Then DE entered her life, with a program that brought computers into her high school.

“I had seen a computer on TV but I’d never gotten a chance to touch one,” she explained, speaking in Tamil with poise and confidence onstage. “I learned how to collect and analyze data, and I was able to earn 100 percent marks in science and math — all thanks to the computers. This has made my parents very proud of me.”

“In my community, people think that a woman should not work outside the home,” she added. “But through DE, I have learned that girls can do anything.”

After she spoke onstage about her desire to one day become a gynecologist, Lakshmanan got a surprise when Anil Godhwani, the cofounder of Simply Hired, cofounder of the India Community Center and an AIF trustee, announced a pledge to fund her medical education. The room erupted in applause.

Two young beneficiaries of AIF’s Market Aligned Skills Training had an equally moving success story to share: Shyamali Roy and Rehana Khatoon described how they overcame gender bias to get valuable computer skills and job training through MAST. They now work with iMerit, a global outsourcing company based in Kolkata that was founded by Silicon Valley tech pioneers Anuradha and Dipak Basu. iMerit’s clients include Google, Microsoft and Bank of America.

“Where I live, the locality is not a very developed area,” said Khatoon, now a project coordinator at iMerit. “People are not very educated and they think girls should not work outside the home, or get higher education. When I joined the course and got my job, I found out that unlike what people from our community said, girls can do anything they want to do.”

Roy explained that she travels two hours each way to reach her job as a project leader. “My lifelong dream was to get a job with which I can support my family … There are other centers that provide similar training, but MAST is different. It helps people who cannot afford expensive courses. And most importantly, then it helps the trainees get placed in jobs and build life-long careers.”
Two leading Silicon Valley executives were also honored at the gala: Greg Becker, president and CEO of Silicon Valley Bank and SVB Financial Group; and Francisco D’Souza, CEO of information technology provider Cognizant Technology Solutions.

“I accept this honor on behalf of the 170,000 employees of Cognizant,” said D’Souza. “The work of AIF is a testament to what is possible when we build bridges between two great nations: the United States and India.” During D’Souza’s tenure at Cognizant, the company’s revenues have grown from $1.4 billion to over $8 billion. Its Cognizant Foundation focuses on using technology to improve health care and provide opportunities in underserved populations in India; D’Souza announced that in addition to the foundation’s work with 12,000 students in Tamil Nadu and Andhra Pradesh, the foundation would now also support 30 schools in Karnataka.

Becker accepted his award by recalling a quote from Albert Einstein that said, “It is every man’s obligation to put back into the world at least the equivalent of what he takes out of it.” He praised the staff of Silicon Valley Bank in their enthusiasm for charitable causes such as the Leukemia and Lymphoma Society, for which they raised a total of $1.5 million through walks and other fundraising events; and mentioned SVB’s $3 million in support of Best Buddies International, a nonprofit that creates opportunities for one-to-one friendships, integrated employment and leadership development for people with intellectual and developmental disabilities.

The evening was hosted by standup comic Anish Shah, who entertained the largely Indian audience with riffs on his old-school Gujarati family.

As part of its mission to empower youth in India, AIF is sending 25 Youth Ambassadors from the U.S. to India this June to work with nonprofits in India. AIF has also organized several events in the San Francisco Bay Area: 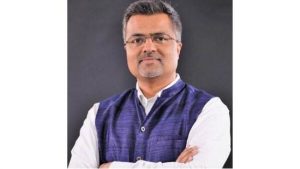