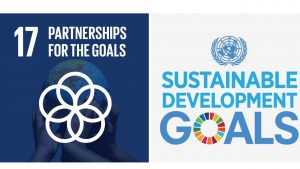 In September 2015, seventeen UN SDGs were ratified by 193 member states. Over the last three years, one of the biggest questions surrounding the SDGs is “how will all these goals be enforced across so many countries?” The answer lies in partnerships between the governments, the private sector, civil society, individuals, and the community. Like all great challenges, no one can tackle it alone. The UN explains, “These inclusive partnerships built upon principles and values, a shared vision, and shared goals that place people and the planet at the centre, are needed at the global, regional, national and local level.”

The American India Foundation (AIF) operates on multiple fronts to accelerate progress toward the Global Goals by focusing on health, education, livelihoods, and leadership development. AIF works in some of the most remote geographies of India, contributing to many of the SDGs. Since 2001, AIF has impacted the lives of 4.6 million people, across 24 states with support of 310 partners, made possible by incredible support from the communities we work in, governments, and the private sector – a strong commitment to multi-stakeholder partnerships.

Industry plays an important role in advancing the drivers of change such as economic growth, job creation, reduced inequality and good health & well-being for all (SDG 3). In 2009, AIF Tata Steel partnered with AIF in what began as a pilot program to save the lives of mothers and babies. With the participation of the Government of Jharkhand, AIF’s award-winning Maternal and Newborn Survival Initiative (MANSI) demonstrated significant results of 46% decrease in neonatal mortality and 94% increase in pregnant women receiving medical check-ups. This success drove the scale-up of MANSI as a PPP model to other states in India. Presently, leading pharmaceutical Hospira (acquired by Pfizer) supports MANSI in remote tribal areas of Andhra Pradesh and The Hans Foundation supports MANSI in Uttarakhand. Together, MANSI is reaching out to 3400 villages across 4 states of India, and building the capacities of 3657 community health workers (ASHAs) in simple but effective home-based health interventions. We aim to scale up MANSI to 15000 villages over the next 6 years.

MS International Inc. based in Orange County, CA has supported AIF’s livelihoods programs since 2013. Funded by MSI, AIF set up a unique model in skilling youth in Rewari, Haryana in which over 1600 unemployed youth received skills training with a 74% placement rate, thus giving them an opportunity to decent work and economic growth (SDG 8). MSI’s consistent support to AIF’s education programs is seeing tremendous change on the ground.  Around 1000 children have gained access to learning enrichment with a focus on literacy and numeracy skills under the LAMP program in 45 villages of Gujarat. Through the Digital Equalizer program in Telengana, over 16,629 students and 300 teachers in government schools have benefitted from techno-pedagogy in the classroom, thus contributing to SDG 4. 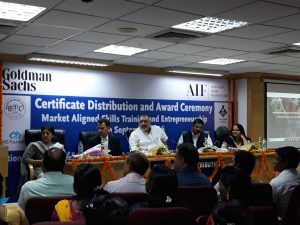 At an event to commemorate 15 years of AIF’s work in India last year, Goldman Sachs CEO, Bunty Bohra said “Goldman Sachs has had an engagement with AIF for the last several years. But many of our partners and many of our senior professionals have had a longer connection, even going back to the inception of the organization 15 years ago.  I am proud to be one of the people based in India that’s helping to build a bridge between the USA and India through AIF.” With Goldman Sachs support, AIF developed entrepreneurship skills in 120 underprivileged young women in three geographies, also building institutional tie-ups with National Institute of Enterprise and Small Business Development (NIESBUD) and IIM (Lucknow). This month, the Minister of State for MSME (Independent Charge) Shri Giriraj Singh distributed awards and certificates to the star performers and beneficiaries of this project. Other leading private sector companies that support AIF’s livelihoods programs (SDG 1,5 and 10) are financial giants Franklin Templeton and leading solutions providers such as Capgemini and EXL Service.

Integrated community projects supported by Amazon, in Haryana and Tamil Nadu, pool in AIF’s strengths across its programs in education, livelihoods and health. It’s a unique model for AIF, maximizing benefit flow and wellbeing of communities living in close proximity to Amazon’s warehousing facilities. The scale and influence of these interventions are dependent on specific local needs and aim to ensure the greatest possible impact. Similarly, through its CSR umbrella We Care, Hero Motocorp Ltd, the world’s largest manufacturer of two-wheelers based in India, extended support to AIF’s Market Aligned Skills Training (MAST) and Ability Based Livelihood Empowerment (ABLE) programs since 2017 to provide skills training to disadvantaged women in Haryana through customized employment-oriented courses.

Coca Cola’s partnership with AIF began with the VEER campaign in 2014 to raise awareness for employability towards persons with disabilities. Over the years, backed with confidence from the success of VEER, Coca Cola is now supporting AIF’s education program Digital Equalizer in 5000 schools under the auspices of campaign Support My School, Mission Recycling – to sensitize 1.1 million students towards recycling of PET waste.

In conclusion, the UN’s sustainable goals are ambitious but the final goal (SDG 17 Partnerships) is more fundamental than the others because it serves as a vehicle to achieve other goals. Our collective ability to achieve the goals hinges upon our willingness to forge partnerships. AIF values its private sector partnerships that mobilize and share knowledge, expertise, technology and financial resources to support the achievement of the Sustainable Development Goals. We are grateful to the partnerships of so many great corporates and deeply value the faith they put in us as we work together to catalyze social and economic change across India.

This article is the first in the Partnerships Series.