CAMBRIDGE, MA–The American India Foundation raised $800,000 at the organization’s 8th Annual New England Gala, which took place at the Seaport Hotel in Boston on November 23. Over 350 prominent professionals and philanthropists were in attendance.

“This was clearly our best gala ever. I am very positive about the future of AIF in New England because our base of support has grown substantially and we have a strong and involved local leadership,” said Raj Sharma, who is on the organization’s Board of Directors. “Next year, we plan to institutionalize the NE chapter by setting up a Board of Governors who will engage with donors and organize events and seminars to educate and inform our well-wishers of the incredible work being done by AIF for India’s development.”


The AIF gala, which was attended by more than 350 business and community leaders and philanthropists, was chaired by Dr. Sanjiv Chopra and his wife, Amita.

“Amita and I were honored and humbled to serve as Chairs for the 2014 AIF Gala. We find the work that AIF does to be inspiring for us and our friends but more importantly it is transformative for the so many less fortunate in India,” said Dr. Chopra. “What resonates for us most is the reach and impact of Programs like LAMP that are feeding and educating more than 260,000 children of migrant laborers – children who were previously neglected and abandoned but now are learning and have the potential for a bright future. Our goal was to inform and inspire the attendees and advance AIF’s mission.”

AIF’s Learning and Migration Program, known as LAMP, supports children of migrant workers in India. Every year, over 72 million people in India migrate from their villages in search of better work. All too often, their children miss out on receiving an education. The LAMP Program provides an education, hostel, and food for these children. Since 2003, over 280,000 children have been impacted by this program.

Nirmala Garimella, manager of AIF’s New England chapter, said that goal of the organization is advance the mission of disrupting poverty and aiming for social equity.

“Putting this event together required tremendous dedication, passion for the cause and a team effort,” Garimella said. “We are proud at AIF that we achieved all this with an amazing group of volunteers and a tireless leadership that brought a philanthropic community together. We invite all like-minded folks to join in our mission.”

Madhur Jaffrey, an Indian writer and actress who has been active in radio, theatre, television and film, was the guest of honor. Also honored at the gala was Dr. John Maraganore, CEO of Alnylam Pharmaceuticals, for his various contributions to the advancement of science, research and technology and focus on community wellbeing.

The AIF’s annual galas around the country are most important fundraising vehicle and is key to AIF’s foundational success. The Gala has become a premier philanthropic event, attended each year by hundreds of guests who are leaders in business and philanthropy.

Mistress of the ceremonies was Rupa Shenoy of WGBH and Boston Public Radio. Entertainment was provided by Deepti Navaratna of Carnatic Alchemy project. And food was served by Masala Art.

Founded in 2001 at the initiative of President Bill Clinton, AIF is committed to catalyzing social and economic change in India and building a lasting bridge between the United States and India through high-impact interventions in education, livelihoods, public health, and leadership development. AIF has impacted the lives of more than 1.9 million of India’s poor and aims to reach 5 million by 2018.
Read Full Article 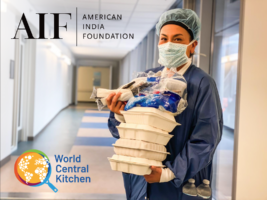