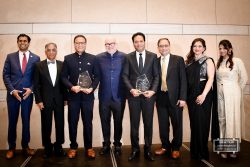 The money will support the organization’s Maternal and Newborn Survival Initiative.

The American India Foundation (AIF) raised $190,000 at its annual Philadelphia gala in support of the organization’s Maternal and Newborn Survival Initiative (MANSI).

More than 160 dignitaries, among them, business leaders, entrepreneurs, philanthropists, attorneys, physicians, artists and scholars attended the event held at the National Constitution Center in Philadelphia, overlooking the historical Independence Hall, on February 25.

The gala honored Chirag Patel and Chintu Patel, co-founders, co-chairmen and co-CEOs of Amneal Pharmaceuticals, for their outstanding leadership in business and philanthropy, AIF said in press release.

Speaking on the occasion, Chakroverty acknowledged the work of philanthropic organizations like AIF in India.

An enthralling performance by the local a cappella group Penn Masala was a feature of the event, which was emceed by restaurateur and celebrity chef Kunal Lamba and producer Shraysi Tandon

The MANSI program, which is designed to reduce maternal and child mortality in rural, impoverished areas of India, utilizes a public-private partnership model to provide the resources and support required to empower local communities to care for their mothers and children while improving the local health system.

The initiative provides preventative and curative care for both mothers and newborns all the way from the individual household to government health facilities to ensure new mothers and infants have the care they need to prepare for, survive, and thrive during and after pregnancy.

In a statement issued prior to the gala, honorees Chintu and Chirag Patel lauded the work of AIF.

“We are proud to support the important work of the America India Foundation, an organization that strives to improve the lives of millions of citizens of India through the provision of healthcare, livelihoods, and education,” they said in the joint statement. “Although there is great need in India, we are confident that together, under the leadership of organizations like the AIF and our own Niswarth and Irada Foundations, we can produce impactful improvements that improve countless lives.”

AIF’s Philadelphia chapter, one of the 11 chapters the organization has across the nation, was launched in October 2015. The founding leadership group included Dr. Kavita Gupta, Dr. Sanjay Gupta, and lawyers Rani Emandi and Prema Roddom.

Read the full article here on The American Bazaar. 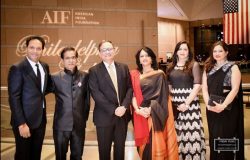