AIF’s Southern California chapter celebrated Mother’s Day this year with a special fundraiser to support the William J. Clinton Fellowship for Service in India. Hosted by Ravi and Radhika Achar at Malibu Family Wines, the intimate dinner was attended by approximately 60 AIF supporters, and honored Dr. Amarjit S. Marwah – a philanthropist, civic leader, and social entrepreneur – with the AIF Lifetime Achievement Award for his political and civic leadership.

The emcee of the evening was star of the hit Bollywood film ‘Three Idiots’, Omi Vaidya. He introduced AIF Trustee Tania Mirchandani, who welcomed guests and explained AIF’s public health initiatives, speaking particularly about the Maternal and Newborn Survival Initiative (MANSI), which had special significance to the audience on Mother’s Day. Southern California Leadership members Megha Kadakia and Saurabh Kikani honored Dr. Marwah with his award and he shared his journey from India in the 1950s to the United States.

Since the 1950s, Dr. Marwah has advocated for Indian Americans, and he is now a philanthropist with decades of humanitarian service in India. His focus on providing lasting education for the underprivileged in India has included localized education initiatives which have tracked the progress of hundreds of impoverished students from pre-grade school through the University system, as well as building schools and providing basic infrastructure in villages. In 1956, Dr. Marwah served as a campaign manager for Dr. Dalip Singh Saund’s successful election, the first Asian American elected to US Congress. Today, he is renowned for his generosity and desire to give back to the communities he is involved in.

The evening’s final speaker, AIF Clinton Fellowship Alum Marc Alongi, approached the issue of social and economic progress in India from a different angle. Testifying to the Fellowship’s unique ability to connect skilled young Americans and Indians to under-resourced NGOs in India to combat some of the country’s most formidable issues, Marc spoke about his Fellowship experience at AIF Partner NGO Ashram Paryarvaran Vidyalaya and the benefits he saw from the program.

Inspired by the stories of Dr. Marwah and Marc Alongi, guests pledged $30,000 to AIF’s Clinton Fellowship program through a drive that was facilitated by Tania Mirchandani and Southern California Leadership Council member Anil Punyapu. The crowd was then entertained by a live singing performance by musical artist Vishal Ailawadhi, and the evening ended in dancing.
The dinner celebrated the spirit and the roles of young Americans and Indians in building a better future for India. By pairing a select number of highly skilled young professionals with leading NGOs and social enterprises in India, the William J. Clinton Fellowship accelerates impact through projects that are replicable, scalable, and sustainable. Through ten months of service and fieldwork, Fellows gain knowledge of development on the ground in the fields of education, livelihoods, public health, and social enterprise, honing and harnessing their growing skills as change agents capable of effecting lasting change. The event raised a total of $70,000 to support AIF’s efforts to bring about social and economic change in India.

A special thanks to our hosts, Ravi and Radhika Achar, AIF Trustees, Tania and Dinesh Mirchandani, the Southern California Leadership Council which includes Asha and Anil Punyapu, Megha Kadakia, and Saurabh Kikani, our event planning committee which includes Ritu and Vikas Thakur, Suchir Batra, Varuna Grover, and Asha Punyapu and Luz Pacheco for their time and generosity in making this event possible. 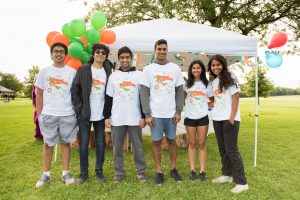 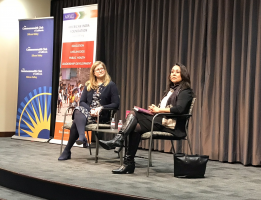 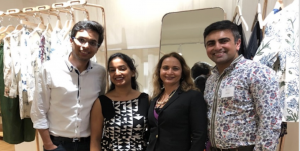