In collaboration with civil society organisations, NGOs, and other stakeholders, AIF has recognised persons with disability, migrant labourers along with street vendors, sex workers, tribal population, and women working in the unorganised sector, as the five most vulnerable groups in need of immediate intervention.

“With India’s federal government expanding vaccination eligibility to all age groups above the age of 18 years, the demand for vaccines will soon outstrip supply, given India’s population load, leaving the most vulnerable groups at the margins. A strategy to secure priority access of vaccines for the vulnerable groups is imperative, to arrest the spread of the virus,” said Mathew Joseph, Country Director, AIF.

“Vaccination is the only sustainable and long-term solution to the current crisis. From our experience of working with frontline workers, communities, government, and healthcare experts, we formulated a quick and agile plan to prioritize a million most vulnerable people of the population, until vaccine drives cover a critical mass, an only line of defense against the resurgent COVID wave and strengthen the public health ecosystem for future COVID related emergencies,” said Nishant Pandey, CEO, American India Foundation.

“Mitigating misinformation around vaccination is the first step towards countering vaccine diffidence. Creating training modules for frontline workers to counter myths around vaccination is almost as important and providing access to vaccine itself. Our awareness and behaviour change campaign will help ensure readiness in the populous we want to inoculate on priority,” recapitulated Nishant. 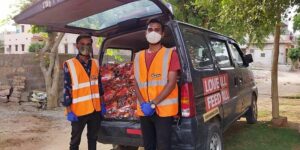