AIF is committed to improving the lives of India’s underprivileged population, with a special focus on women, children and youth.

The American India Foundation (AIF), as part of its comprehensive COVID Relief Response, launched ‘The First Million’ an initiative to vaccinate a million most vulnerable Indians across the country. Covering India’s broader geographies and reaching out to the population that warranted behaviour change in their attitudes and perceptions against the COVID vaccination, AIF, also designed Mission Corona Vijay – a behaviour change communication campaign aimed at engineering COVID appropriate behaviour and persuading the hesitant population to get both doses to complete the vaccination cycle.

Mr. Nishant Pandey CEO of AIF, said, “Right from the inception of the initiative, we envisaged the significant role of research to identify the beneficiary population in the communities that will either remain neglected or require intense intervention from the programmatic point of view. Once identified, preliminary research was conducted to recognize their milieu and unique set of challenges and deterrents to getting vaccinated. This was followed by a quant study consisting of group discussions and one-on-one interviews with the identified community members in chosen geographies. The findings were curated to inform the design and execution of the communication material to address the specific hesitancies. Underpinning the Mission Corona Vijay (MCV) campaign, research helped steer the campaign’s impact & effectiveness.”

MCV catered to a larger audience and persuaded them to get both doses to complete the vaccination cycle. The campaign helped mobilize a broad spectrum of the beneficiary segment and has been imperative to the success of the vaccination initiative. Today, working across 26 states, the campaign has successfully facilitated more than 2 million doses to this section. The MCV campaign has so far reached over 100 million people.

Working with Ernst & Young (EY) as a data and process monitoring partner, AIF maintained data transparency and accountability for the vaccine initiative. The initiative was a mix of integrated communication that serves the objectives and works for the higher welfare of the stakeholders, educating and mobilizing them through multiple channels.

AIF also collaborated with multiple NGOs and State governments to aid them in terms of local knowledge and relationships with block and district authorities which paved the way for a successful campaign. Elucidating further, Nishant said, “We had an incredible synergy with on-ground facilitation and implementation partners, and it emerged stronger with every passing phase of the program. Greater milestones can be achieved by an energetic team’s sheer grit and enthusiasm, and fortunately, we had one.”

AIF is committed to improving the lives of India’s underprivileged population, with a special focus on women, children and youth. With the pandemic disproportionately impacting the poor, AIF has pivoted to design and deliver interventions that rehabilitate disenfranchised communities around the country. Leveraging the experience of the past 20 years and the synergies with state governments, AIF launched Project Entre-Prerana, an intervention at the confluence of digital and financial inclusion, to implement systemic transformation focused on reviving the livelihoods of 1 million street vendors and other micro-entrepreneurs, by providing them access to new sources of income, low-cost working capital and mainstreaming their business through formal registration. Nishant further added, “Through our flagship Education program – Digital Equalizer, during unprecedented lockdowns and school closure, AIF ensured that children with no digital access continued their learning through community/remedial classes, tablets and pen drive loaded with content, along with tailored digital content and worksheets. Entre-Prerana and DE are among many programmatic interventions that AIF has undertaken to rehabilitate the lives of those at the margins, reaching out to more than 12.9 million people across 35 States and Union Territories in the country.”

Since the first outbreak, the American India Foundation has mounted one of the largest relief responses in its history to help close to 4 million people fight the health, economic, and social impact of COVID-19. Our efforts focus on critical areas of saving lives, fighting systemic shortfalls, burgeoning poverty and inequality for the poor and vulnerable, supporting job creation, and rebuilding in better ways. From April 2021 through March 2022, AIF raised over $44 Million through 19,217 donors and leveraged more than $9.5 million worth of Government assets and resources to reach 560 districts across 31 States and Union Territories of India with COVID-19 relief efforts.
To read the published article, click here 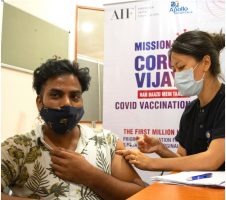 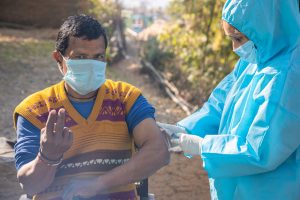 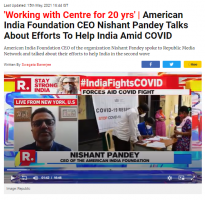