“Today, we are going through a critical period of time. We are a nation with an ancient culture, which is now facing the threat of extinction. We need your help, the international community’s help, to protect our culture. Our culture is one of the heritages of the world. Protecting an ancient culture like this is the responsibility not only of the concerned nation but also of the world community as a whole.” – His Holiness The 14th Dalai Lama

I was always fascinated with the vibrant Tibetan traditions and culture. I visited Tibet in 2018 and it was awe-inspiring to see the beautiful landscapes, meet kind people, and absorb their vivid, ancient culture. Though it also felt unsettling to learn about the turbulent history of Tibet and the life of Tibetans on their motherland. That’s when I wondered if there’ll ever be a possibility to assimilate more about Tibet, the people and their lives – and who knew this would come true two years later!

Recently, I was granted an exposure visit to the Central Tibetan Administration (CTA) in Himachal Pradesh by the AIF Clinton Fellowship program.

Central Tibetan Administration is a democratic Tibetan government-in-exile based in Dharamsala, Himachal Pradesh.  (To learn more about CTA, read my Co-Fellow Chenam’s blog.)

On day one, my Co-Fellows Tenzin and Chenam gave me a campus tour of the CTA. The campus is situated in McLeodganj amidst the mesmerising snow-laden mountains. It is a vibrant space with the parliament, judicial services, administrative offices, a library, a museum and everything that takes to run a functional democratic government-in-exile.

The next day, I interacted with one of the Tibetan entrepreneurs in India who is supported by the Tibetan Entrepreneurship Development (TED) and learn about his start-up. 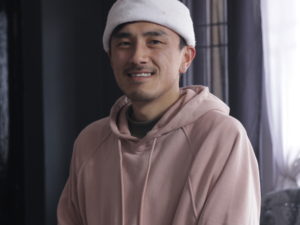 Tenzin Migmar is a passionate contemporary dancer and wanted to convert his passion for dance into a thriving profession. “I applied for the TED Incubation Program and got selected. The selected budding entrepreneurs received intensive training on entrepreneurship and it was extremely helpful to get me started with my studio, Upside Down”, said Tenzin as he shared his journey as the first Tibetan to start a fitness and dance studio in Himachal Pradesh. 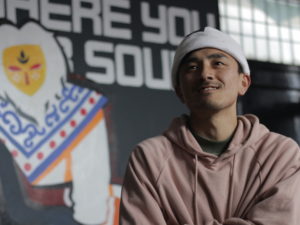 Tenzin’s mission is to spread positivity and a healthy lifestyle through dance. “We conduct Zumba workshops and dance competitions in Dhasa to promote fitness and community building,” said Tenzin. When asked about the way forward, he said, “It is a long journey, but my passion keeps me going. I aim to scale my business and spread fitness and harmony through dance,” said Tenzin as he became candid about his ambitions in life.

Considering my current work as an AIF Clinton Fellow at Khamir on the arts and crafts of Kachchh, Gujarat, my Co-Fellows knew I would be eager to learn about the Tibetan Institute of Performing Arts (TIPA) thus, I visited the institute.

TIPA is a premier exile institute entrusted with the responsibility of preserving and promoting Tibet’s unique, ancient culture, and tradition of performing arts. Established on August 11, 1959, TIPA is a vibrant and creative institute based in the foothills of Himalayas in Dharamsala, northwestern India, TIPA currently has about 75 members, including artistes, instructors, administrative staff, cultural students and craftsmen who live on the institute’s premises, and more than 500 trained alumni all over the world who work towards the preservation of Tibet’s ancient culture.

The institute also carries forth the lesson and training in the tradition of Ache Lhamo or Tibetan opera. Furthermore, the students are also taught in traditional folk instruments and songs from Tibet’s different region. Highly trained and polished, the professional artistes of the institute serve as cultural ambassadors of  Tibetan diaspora. [2]

The summer festival of Yarkyi is a cultural competition held every year to mark the founding anniversary of Tibetan Institute of Performing Arts. [3] The festival is an internal competition between the institute’s two houses: Gyalu and Ngonpa. The title of these two houses is inspired by characters from traditional Tibetan opera. Each group has to research Tibet’s folk dances and compose one solo song and one group song. The judges of the competition are competent experts drawn from various fields. The musical program is later performed live for general audiences and is also made available through DVD. [4]

The celebration of the grand Shoton festival began in 1993 on advice given by His Holiness the 14th Dalai Lama. This festival celebrates the unique Tibetan artistic heritage of opera or Ache Lhamo. Eleven troupes from different parts of India and Nepal take part in the festival. Each troupe presents ancient opera stories. [6]

TIPA has been instrumental in keeping the rich Tibetan cultural heritage of dance and music alive for the last 60 years in exile and the primary aim is to use these festivals as opportunities to preserve the traditions. No wonder why Tibet is called the ocean of songs and dance!

It was interesting to learn that the handicrafts unit at TIPA design and create costumes for the artistes’ dance and music performances in-house.

It was an enriching volunteering experience to learn about CTA and design a brand guideline for TIPA. Moreover, this exposure visit was indeed a refreshing journey that made me more aware of my Co-Fellows’ daily lives and their everyday ups and downs in service of the Tibetan diaspora in India. On a lighter note, I loved cooking with them and learnt new recipes to cook back home. I had positive energy and new perspectives while heading to my own Fellowship host organisation.

Aishwarya is serving as an American India Foundation (AIF) Clinton Fellow with Khamir in Bhuj, Gujarat. For her Fellowship project, she is designing a unique range of craft products and publicity materials to support local artisans reach new markets, increase their income, and secure their livelihoods. Born and brought up in a small town, Aishwarya always questioned the increasing dichotomies between the developed and developing world. To channelize her curiosity for social impact, she decided to pursue her graduation in mass communication. During her undergrad, she participated in the YES Foundation Media for Social Change Fellowship to learn about the impact of social media in the development sector. She did an internship with the Indian Express as a journalist and photojournalist, where she covered issues ranging from mob lynching to climate change. A stint at TEDxGateway 2018 gave her an opportunity to work with inventors from around the world, learning aobut the power of storytelling as a medium for change. Aishwarya made a documentary on the Juvenile Justice Act 2015 to study the increase in juvenile crime rate and the discrepancies between the act and implementation. In 2018, Aishwarya participated in a 15-day entrepreneurial train journey across rural India to meet social change-makers who enlightened her about the balance between social impact and profitability. This experience also made Aishwarya look at her hometown in new light: she learned about problems related to declining tourism and waste management. She founded her own nonprofit, ARTC Foundation, to solve these issues. In her free time, she enjoys reading, travel, and photography. Aishwarya is honored to be serving as an AIF Clinton Fellow to expand her horizons in the development sector.