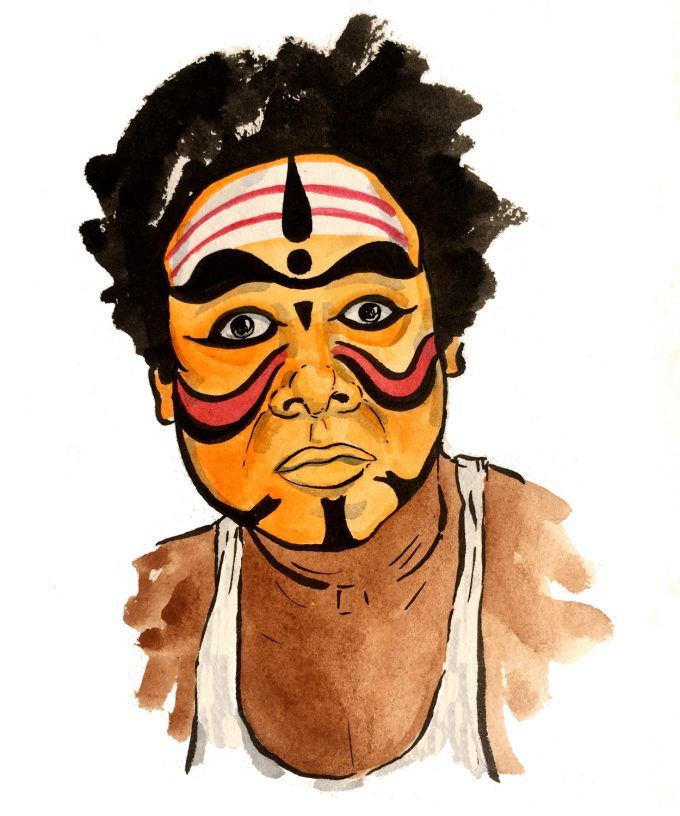 The Kattaikkuttu Sangam hosts an annual festival where they invite Kuttu companies to perform in an all-night exhibition. This year, there were three outside companies who shared the stage with the Kattaikkuttu Young Professional Company. Throughout the day of the festival, students and staff worked to prepare the grounds for the guests. Lights were strung along the entryway road and signs were posted directing visitors to washrooms and water basins. As twilight set at the Kattaikkuttu Gurukulam, performers streamed in on motorcycles and cars while carrying drums and bundles of costumes. Per their rotation in the performance schedule, groups began to prepare their makeup and costumes for their play. 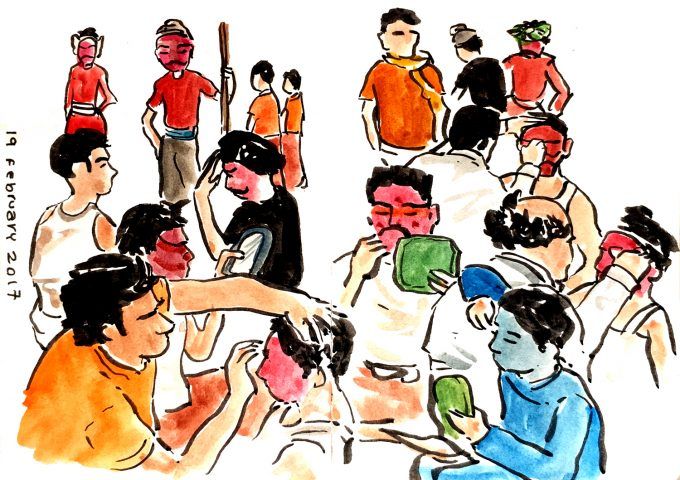 The performers prepared in the open practice hall, where observers watched the men sit in a circle putting on makeup. To create the desired shades and consistency of makeup, they use a mixture of colored powders, coconut oil, and water. The most common powders are orange, red, yellow, blue, and white. A black paste is used to create jet black eyebrows or lines.

Most Kuttu companies are made up of men, many looked to be in their 40’s, which contrasts the mixed gender ensemble of the Kattaikkuttu Young Professionals Company (KYPC). The KYPC is the school’s company and is the first ever mixed gender Kattaikkuttu company. The empowerment of girls performing alongside boys points at the gender equity the organization promotes.

When the first guest Kuttu group stepped on stage it was clear that the spins were slower, the steps weren’t in time with the drums or hand cymbals, and the stage presence of the performers seemed mushy. This isn’t to say that these performers are bad as they can perform for 8-hours straight, rather it shows the tremendous talent of the students in the KYPC. 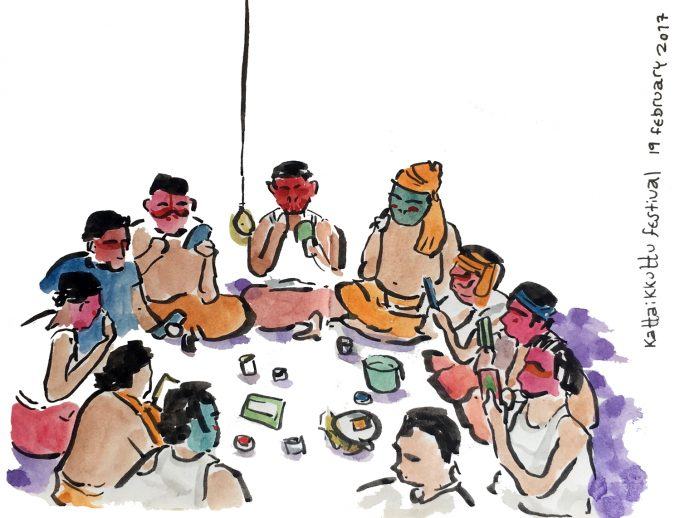 When the KYPC group begins, from the moment the first chord of the harmonium, the air starts to sizzle. The audience sits up a bit higher as the atmosphere seems to become saturated with melodic yelling. The first song by the chorus is the spark to the tinder and the flame sets off with the clowns. Clowns are dynamic characters who are the only ones that have the power to interact on stage with the cast as well as the audience members. They are typically characterized with bright personalities and dress in shimmery or colorful costumes. The KYPC utilizes two clowns, as opposed to the single clown of most companies, which allows the duo to play off of each other. They dance and jest with one another, each with a personal style that enhances the caricature of their counterpart. 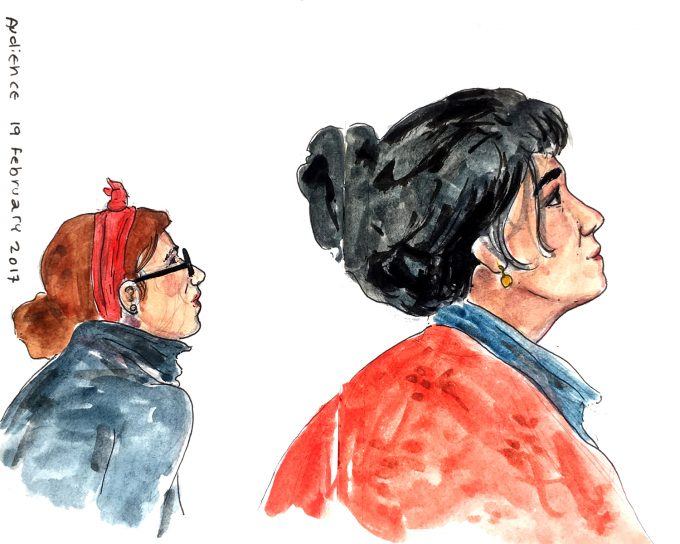 After they’ve introduced the production, the set flame moves to engulfing as the ornamented gods enter in bursts of reds and gold. The students’ steps are crisp to the beat, their spinning is momentous, and their stage presence is calculated. I found myself commenting to others, “They are on another level.” I kick myself for forgetting how talented the children and Junior Staff are as professional performers. In awe, I watch how the dreams of a few have evolved into something so tremendously explosive in a rural place many would prefer to romanticize as dying.

It is from this perspective that I wonder where the bridge from this rural, slowly steeped cultural heritage can be linked to the urban. I feel, they both need each other immensely. Where the urban, to grossly characterize, charges to capture market forces of globalization at the cost of cultural legacies. Yet, rural art forms and practitioners such as the Kuttu from the KYPC are way posts needed to maintain a regional identity. Rural identities are also supported by the urban through capital investments that sustain the livelihoods of artisans who are pushed to the fringes of economic stability as prices for goods and services scale to serve a growing middle-class.

The Kattaikkuttu Sangam is an organization deeply aware of the need to stay between the two worlds. Linked between the traditional rural and globalizing urban; a metaphorical campfire in the night where Tamil communities can gather and look into the flame of their timeless common identities.