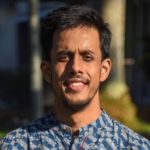 Highlights: Tonmoy is serving as an American India Foundation (AIF) Clinton Fellow with Project Potential in Kishanganj, Bihar. For his fellowship project, he is supporting and coordinating public health projects in four panchayats across Kishanganj. Tonmoy was raised in Numaligarh Refinery Township, a small township in Assam. Right since his childhood, he has been a firm believer in the concept of equity and thereby, equitable and sustainable policymaking has always interested him. With this in mind, he decided to pursue Political Science, with minors in Economics from Delhi University. Early in his undergraduate studies, he understood the power of learning by doing, which made him undertake his first internship at Child Rights and You in his second year of college. Here, he taught various subjects to slum kids along with being a part of their flash mob team. To understand policymaking, he worked as an intern at Niti Aayog, the government of India’s policy think tank, where he handled the partner management process at the Women Entrepreneurship Platform along with being a part of the organizing team of India’s first Global Mobility Summit – MOVE Summit. Later, he was appointed under the special secretary to Niti Aayog, as a research intern at CADFI (Center for Advancement in Digital Financial Inclusion). Apart from this, he has been volunteering in various capacities with other organizations in the development sector like Rural Changemakers in rural Madhya Pradesh, and Maati Community in Assam, exposing him to challenges faced by rural India while simultaneously motivating him to work on eliminating them. In his free time, Tonmoy likes to watch documentaries, read about human psychology, and go for runs. Tonmoy expects the AIF Clinton Fellowship to be a highly reflective experience for him. As an AIF Clinton Fellow, he aims to do better, be better and bring conversations surrounding the development sector, back to his hometown.

It’s the pinnacle of all sporting events – the Olympics!!! With the onset of the […]

3 Most Significant Learnings from my Fellowship Journey

For the entirety of my childhood, I had been raised in a small township in […]

My Journey with Project Potential: Lessons on Leadership and Culture Building for Growth

For the entirety of my childhood, I had been raised in a small township in […]

Fellowships are an exciting concept, not only for the ones who apply for them but […]