Co-fellow Akiera Gilbert’s reflection about the role of boys in Indian society spurred my thinking about how I personally view gender, and how Shaishav has impacted my views on the topic as well.  Out of the several revealing insights that Akiera garnered from her peers and colleagues, one struck me in particular, “due to the extreme economic disparity and religious divisions that exist in India, it is even more difficult to get people to corral around one issue such as women’s rights”.  I completely agree with this idea; in a land of many differences, it is difficult to get people to pay attention to the issues that matter to you the most.

As we delve further into the topic of gender issues, my perspective will focus on children whom present as boys and girls as it is primarily the population that Shaishav works with.  However, the topic of gender identity as it relates to third gender, hijras, and members of the LGBTQ+ community in India is a crucially important issue. A great place to start would be the Delhi Branch of Akiera’s host site, the Naz Foundation, which provides a perspective on how NGOs are reaching out and advocating for the LGBTQ+ community.

Shaishav understands how difficult broaching differences is too, hence why many of its exercises begin by honing in on common values between children.  For instance, between a Muslim or Hindu child, the want for protection will not change. By fighting for this right together, Shaishav believes that children will recognize that in their core, they all yearn for the same things in life: opportunity, security, and recognition.

When working with girls and boys simultaneously,  Shaishav strives to keep all of its activities gender-neutral, meaning that their activities are meant to give both genders equal opportunities to lead and interact.  The idea is to create a bond between them so that when they see gender-specific injustices, they will stick up for each other because they connect through a common value that has been violated.

For instance, in the case of child marriage, if it is a union between two underage children, both equally face violations to their human rights, although it may manifest in different ways.  The boy is pressured to be the head of a household and the girl is pressured to have children, the pair of them wholly unprepared for such responsibilities. Both are forced to give up individual ambitions for the sake of societal norms.  If the couple demands recognition of their rights as humans – such as the right to education – while putting gender aside, it would be a powerful statement against child marriage. Such insights are more likely to be developed if the concept of universal rights is introduced to boys and girls during childhood, and are shown how they can be powerful allies for each other.

Shaishav also recognizes that some adolescent development issues impact both boys and girls, and each gender are equally deserving of attention in these issues. However, it may seem like the issues’ impact on one gender is greater because its magnitude is more publicly recognized.  One such issue is body image, particularly as it relates to the influence of the media and gender norms.

Body Image: Through the Research Lens

In December, Shaishav held two events focused on adolescent issues for girls and boys. One activity involved body image where groups of children were each given a bar of soap and asked to create a pitch to sell the product. Ultimately, the message was meant to get children thinking about how advertisements change how they perceive their own self-image.  When the activity was performed with the boys, they had a difficult time conceptualizing how the media affects their own self image. This might be in part because parents don’t always have discussions with their sons’ about not internalizing what is seen in the media as a valid measure of their own self image. While I had difficulty finding specific examples of what conversations on body image with their parents looked like for boys, I did find some surprising discoveries about how parental body image affect their son’s body image.  An article in the Hindu reported a mother describing how her own body image issues translated to her son becoming more self-conscious about his weight (5).  The story alluded to the conscious recognition that men’s self image is also susceptible to the influence of media and how marketing has only recently started gaining traction.

In fact, when Fair n Handsome- a whitening cream targeting men- first introduced their product to the market, they assumed that sales would be slow because men would either be too shy to buy it or didn’t care that much about their appearances.  In reality, sales soared, and a more visible expression of male grooming habits was seen. Indian men openly admitted that they didn’t equate being dark-skinned with being handsome (1).  Furthermore, seeing Bollywood actors, whom were mostly fair-skinned, endorse these products solidified fairness as a male beauty ideal.  Young boys don’t have many role models showing them healthy strategies to deal with insecurities about their bodies as they starts to change.

The body image exercise is in full- swing now, and boys are chattering away on how they perceive themselves and those around them. The discussion circled back to how using a particular kind of soap doesn’t necessarily mean that you are any less cleaner than the person who uses a different kind.  Through several rounds of talks, the boys created a skit that showed a healthy way the media could advertise their product. One that doesn’t call into question the viewer’s worth if they don’t use the product. Some groups giggled their way through the exercise, but some groups, with a strong conviction, showcased ways of uplifting peers who felt insecure about their appearance.

While reviewing research articles on children’s body image, there were many studies on female body image but few on male body image. This seemed to imply a perception of girls having more body image issues compared to boys, in academic research.  However, body images issues of any magnitude and significance are deserving of acknowledgement and intervention, irrespective of gender. Additionally, there were several studies which further convinced me that programs on male body image are as equally needed as programs on female body image.  A body perception study based in rural South India stated body image perception scores did not differ by gender (2).  On a scale of 0 to 10 where 0 was a highly positive self perception, the median score was 4 among both genders. Increasing age was the only variable that resulted in changes to this score; the score increased with age, indicating a greater negative body image perception in later adolescence, referring to ages 14-16.

Another body perception study among college students of both gender in rural Maharashtra acknowledged that girls had greater percentages of body image issues and social phobia but that magnitude of these issues among males was also statistically significant.(3)  So why are there so few studies on male body image?  Could it be that measuring levels of negative body image specific to the male gender can be difficult due to societal constraints on male emotion/expression?  Maybe even more so if there isn’t a particularly large body of work on the types of things that Indian men associate with positive self-image.

Studying body image is complex. And the road to developing a self-image is non-linear and unique, influenced as much by personal experiences as it is by societal ideals.  Feeling the need to put on a confident front and avoid vulnerability makes it a difficult topic to study. In fact, the previously referenced Maharashtrian study among college students stated its limitation as being unable to control its respondents from looking over at others’ papers while the questionnaire about body image was being administered (4).  The space where the survey was conducted required close quarters, so the degree of privacy they could provide was out of their control.  Imagine someone looking over your shoulder as you fill out a survey on your self-perception, may skew your answers right? If anything, this observation was a metaphor to how interested we are in how others view themselves in relation to ourselves. It really makes one think about whether the questions we use to measure body image perception are capturing a view that the majority of the participants we are studying would share.

To hark back to Shaishav’s approach to body image, it realizes feminine body image issues are different from that of masculine body image issues.  But at the very least, children can agree that something like cleanliness is a universal body image ideal, irrespective of gender. Thus, Shaishav chose to start the discussion of body image at this point.  Eventually, the discussion will build up to a complexity where both genders begin to diverge and talk about issues specific to their own gender. Shaishav hopes that having a foundation of commonality preserves empathy, as children branch out and examine what issues they can (and will) tackle, in relation to their identity as a feminine or masculine person in India. 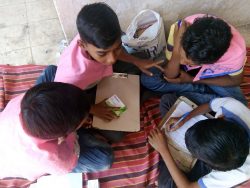 A recent Emory University graduate interested in child welfare and poverty alleviation, Subha would like to eventually work for an NGO. By serving with Shaishav as an AIF Clinton Fellow, she hopes learn more about their world class philosophy for children's empowerment. Prior to joining AIF, Subha interned at the American Association for People with Disabilities in Washington, D.C., and the Global Village Project in Atlanta, Georgia, as a development and policy intern.