Food, in the end, in our own tradition, is something holy. It’s not about nutrients and calories. It’s about sharing. It’s about honesty. It’s about identity. – Louise Fresco [1]

People say Mumbai is an experience and not a city. I never believed it until I moved here as an AIF Clinton Fellow. Honestly, I wasn’t psyched about getting a placement in a big city like Mumbai, even though I liked the city when I visited in 2011. However, I never imagined myself living this experience. Personally, I feel claustrophobic in big cities and that’s why I came with blinders to this city.

However, those blinders came off the moment I landed in this “City of Dreams”, as it is known. The rains, taxi rides, traffic, sea, people and food forced me to experience Mumbai. The experiences here not only challenged me in every aspect of life, but also taught me important life lessons and I can’t thank this city enough for that. I learnt a lot about myself, my existence and more importantly, about my palate. In this blog post, I will be concentrating on one of the major qualities of this city, which made my living here much enjoyable: food.

I have been a big foodie from the time I remember understanding food. I feel it is one of the most important aspects of an individual and community because not only is it essential for existence but also depicts various aspects of identity. It is interesting to also note that food and food habits explain so much about a particular geographical location. Mumbai – or Bombay as it was known in the past – has been the birthplace of some of the tastiest delicacies and while we might think that they were deliberate inventions, most of these were accidental outcomes. Talking to few street vendors and colleagues who have been locals of Mumbai for generations gave me an history of these foods. Here is a list of five best known foods that originated in “Aamchi Mumbai” (My Mumbai): 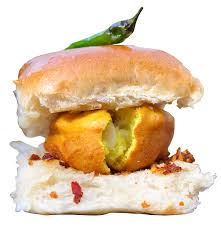 A visit to the city is incomplete in its truest sense, if you have not “experienced” this culinary masterpiece. The vada is a fried potato fritter with spices and coriander stuffed between laadi pav, or bread roll. This is usually served with chutney, onions and fried chilies. The origin of vada pav could be seen as an alternative to a much expensive counterpart: sandwich. The vada pav came into existence when a snack seller, Ashok Vaidya, outside Dadar railway station in Mumbai decided to experiment. He came up with a combination of batata vada (fried potato fritter) and split pav. Soon it gained in popularity and others followed Vaidya. Vaidya introduced the first stall of vada pav near Dadar station in 1966. Today, after 50 years of the creation, there is not one person who doesn’t relate it to Mumbai. Vada pav is a portable, filling and an affordable mass product. It can be seen as a fusion of Marathi and British culture which emerged as an Indian counterpart of the British sandwich. 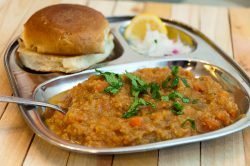 Like vada pav, pav bhaji was an invention to fit the fast-paced life of the common masses. The dish consists of two important parts: pav, which is the soft roll of bread, and bhaji, which is a thick, soupy and spicy curry of vegetables like potato, peas, cauliflower, onion etc. Pav bhaji originated in the 19th century, and the women folk were largely responsible for its conception. To be honest, pav bhaji was an outcome to make a quick filling fix on a tight budget rather than an invention. In the late 1800s when the cloth mills of Mumbai started flourishing, it also meant the workers in these mills were overworked with not much time to eat. These mill workers came from humble backgrounds and the family had limited resources. This was the time when the wives decided to make a spicy curry out of all the left over vegetables in the house and voilà! Bhaji came into existence. However, initially this used to be served with bhakri, a round flat unleavened bread. Today’s version of pav bhaji, however, became popular sometime in the late 70s, when the dish gained fast popularity among the Gujarati community in Mumbai, with added elements like butter, cheese and various chutneys catching up with time. But the basis of the dish – a crush of potatoes, tomatoes, onions, green peas and at times cauliflower or broccoli – remains the same till date. 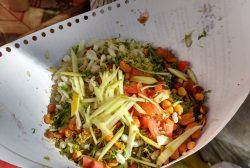 Another one in this list is one of my favorites, too! This is a common snack in Western India, which is made out of puffed rice, peanuts, roasted gram, onions and some spices. A variation of bhel puri is made in the Eastern India which is called jhaal muri and in north India which is called bhadang. There is no clear mention about when and where  bhel puri was first prepared, but it belongs to the food family of chaats. It is difficult to track the history of bhel puri or when it was prepared first, but it is believed to belong to the family of Chaats. Chaats are the salty and spicy snacks with a base of boiled dried yellow peas or chick peas along with fried dough, spices, onion, yogurt and tamarind chutney, sold on the carts throughout India. It is believed that the bhel puri was first created by Gujarati migrants to Mumbai. Commonly used ingredients in bhel puri are puffed rice, mixture, sev (fried noodles like snack prepared from besan flour), onions, chilies and boiled cut potatoes. Chutneys are also used to impart the spicy flavor to the bhel puri. Generally the bhel puri is served after garnishing with diced onions, coriander leaves and green chilies. During the summers, sweet mango chunks are also added to the bhel puri. The bhel puri is either eaten with a spoon or a crispy wheat bread called papri puris. 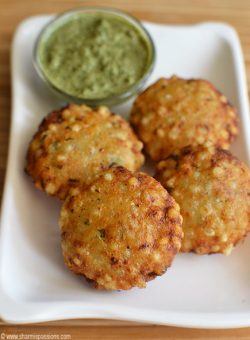 India is a land of festivals and celebration. And there is hardly any festival or celebration in India which is complete without a fast! You must be thinking, how this is related to the next delicacy on the list. Well, sabudana or tapioca sago is one of the major ingredients in the food that is consumed while on a fast. Sabudana is a processed, ready-to-cook agricultural food product and prepared purely from tapioca root. Sabudana is typically small (about 2mm in diameter), opaque white balls which turns much bigger and translucent when soaked in water. Although the origin of Sabudana Vada is difficult to trace, it is said to have originated in Mumbai as a healthy and filling option to consume during long fasting periods. The vada is a deep fried snack made out of soaked sago, mashed potatoes and spices mixed together. During the fasts, any product made out of grains should not be consumed, so sago comes as a good alternative since it is has vegetable source. Sabudana vada is served with a range of chutneys and is best eaten when hot. Mumbai has number of places which will serve sabudana vadas, even if you aren’t fasting. It is a common snack which is both healthy and light. 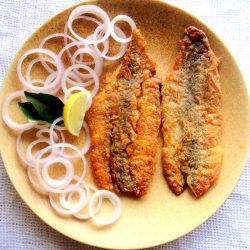 Any coastal location’s cuisine is incomplete without seafood. When rain gods descend on Mumbai, bombil takes the centre stage. Bombay duck – or bombil as it is called in Marathi – is not a duck but a fish. It is an integral part of the city’s cuisine. According to folklore, Bombay duck earned its name during colonial rule in India. This lizardfish was transported in trains that carried mail that were called Bombay Daak or Bombay Mail. The term was bastardised to “duck”, and the name stuck as Bombay Duck. The fish is salted and dried in the sun. The British used dried Bombay duck as an accompaniment to daal and curries, and they imported it from India until 1997. Although the dried bombil is an aquired taste, the fresh fish makes for amazing bombil fry or bombil curry. Bombil fry is made with marinating the fish in spices, rolling it in semolina and then shallow frying till golden brown. If you are a non-vegetarian, this fish is definitely one to try out on your trip to Mumbai.

Excerpts from a blog by Ishan Choudhary posted on www.linkedin.com/pulse/pav-bhaji-when-necessity-birthed-culinary-masterclass-ishan-choudhary

Sumedha feels that her experience as an AIF fellow will help her to understand first-hand how strategizing and creating development projects can bring about more clarity in her interest areas. Although she grew up in India, she feels that the diversity of the country is such that it never ceases to surprise people. She enjoys interacting with new people, travelling and photography. Her conscious choice of getting into the development sector of India has supported her to work for the causes she cares about the most. At Salaam Bombay Foundation, she feels dealing with kids will be both, interesting as well as challenging. Sumedha is looking at making significant contribution to the larger society in which she grew up. Prior to AIF, she has trained adolescent girls from an underprivileged community on video making and has experience in inter-personal as well as organizational communications.