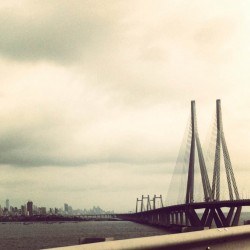 Every day here is like waging a war. A war between the sea and the city. A war between who you should be and who you are. The sea with all it’s arrogance and grandeur, full of unreasonable hopes, unattainable dreams and foolish love stories. Shamelessly urging you to do better, to be better.

And then there’s the city. Inciting you with it’s waves, it’s crests, it’s troughs and the thousand metaphors lost in the middle. Making sure you know that you don’t deserve to be here unless you can prove otherwise.

With it’s high rises and silent settlements. Mocking the sea with it’s internal contradictions and complications. Telling you that it’s only job is to wash away everything as and when you want it to. Telling you that there’s enough life here to camouflage any regular coward who is too scared of coming out, too terrified of his own vulnerability. Constantly reminding you that you’re imperfect but that’s okay. The city lets you be. It doesn’t urge you to open up. Doesn’t push you to the edge. It gives you your time, gives you your space. And if you’re very very quiet, you’ll hear it telling you to slow down and breathe. No matter how lost you are, it let’s you find your way home. 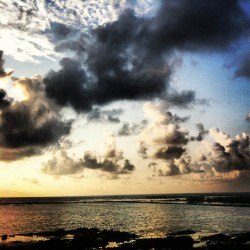 There are enough sounds here to turn the loudest scream into the faintest whisper. You find yourself facing the water trying to sweep you away with it’s false promises and expectations. You feel big. Big that you live here. That you yearn to survive here. And you’re not doing a horrible job at it. But then you feel small. Minuscule. Insignificant. You know that no matter how grand and majestic your achievements and your sorrows seem to you, they mean nothing to the universe. There will always be someone who knows more, has more, has been loved more. There will always be someone with a more fascinating story. And there will also be someone who has nothing. Someone who would trade lives with you in a second if he could. Someone who has never known love. So you stand staring into the depths of this mesmerising water body and you think about being mediocre. Being ordinary. You think about being satisfied with what you have and who you are. Because in the cosmic scheme of things, you’re just a restless energy particle – yearning to move, yearning to climb, yearning to breathe, yearning to matter.

Every day here is a journey from the land of achievement towards the land of pursuit. From the overconfident streets of Delhi to the modest high rises of Mumbai. From the terrifyingly idyllic sea to the comfort and mediocrity of home.

At 19, Tanvi started Becoming I Foundation - an internationally recognised youth led organisation that brings young people face to face with community development projects. The organisation has operations in three cities, a volunteer pool of about 300 people and projects established in the feilds of primary and secondary education, women empowerment, life skills development, inclusive education and art expression.

Tanvi started her journey back in 2007 when she began using her skills as a theater performer to encourage children to come to school. Three years later this led her to a community of victims of sex trafficking in Najafgarh, where Becoming I started it's first project with the women and children in 2010. Attributing a large part of her knowledge base and passion to the people of Najafgarh and her inspiring teammates, Tanvi moved on to being named a Global Teen Leader at the Three Dot Dash - Just Peace Summit in New York and then represented India at the G(irls) 20 Summit in Toronto that same year. Soon after, she was selected as a panellist to speak at the Clinton Global Initiative and then at the United Nations. Tanvi has served as an International Fellow with the Global Fund for Children in Washington DC where she assisted the organisation in their communications and online marketing strategy and created a social media tool kit to be used by their grassroots grantee partners.

Tanvi has been awarded the Karamveer Puraskar - a national award for social justice and citizen action and the Youth Award for Contribution to Humanitarian Development at the United Nations for her work.

A control freak, obsessive traveler, Broadway fanatic and Kathak dancer on the down low, Tanvi aims to change how volunteerism and activism is perceived in India.