While the summer is yet to come, rains have begun in Majuli. The dry surface covered with sandy soil is absorbing the water in no time leaving no signs of rain. But as it clears the dust settled on the leaves, it leaves refreshing the lush green surrounding. Soon the frequency, strength and also the duration of these rains will increase. Then the soil will no more be able to absorb the showers, and the ponds, however large in numbers, will all get filled. The farm lands, the flower plants and the fishing ditches will all get submerged in water. The two mighty rivers Brahmaputra and Subhansiri which surround Majuli island will also stop taking water. Rather these rivers will let the vast water contained in them to pass through Majuli. The rivers can’t help as they already carry a lot of burden with them, the burden of modernization or the burden of continuously increasing consumerism.  The large number of dams which have been built on these rivers and the wisdom that floods could be prevented by building embankments has hampered the flow of slits beneath the river, thereon decreasing the depth drastically. Like every year Majuli island, Assam is getting ready for another flood. 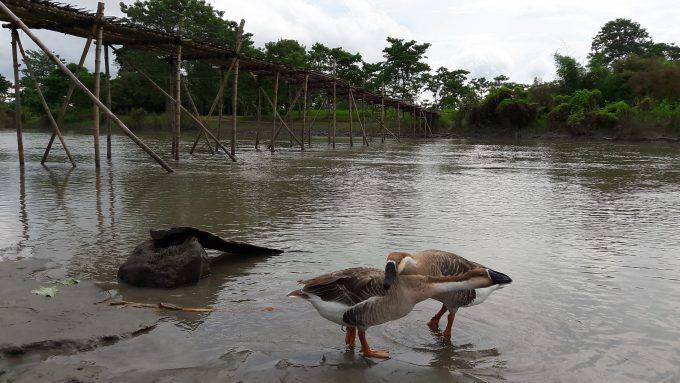 In all these months, the experience of working in this community has been the greatest ever. This community celebrates colour, dance and rain. Almost every month there is some festival celebrated; the name of which I never heard before. In all these celebrations, there are dance, songs and varieties of food. The most fascinating part is knowing that these dances and songs have been based on nature. For instance, Bihu which is the most popular folk dance in Assam, displays the cultivation practice in a very joyous form through dancing.

While assigned with the task of designing a livelihood project in these villages, I was very much conscious that an intervention in this part will only succeed if the initiative appreciates this culture and finds a way to integrate with it. It is also a way to take the entire community on board with the associated community initiative.

I want to reiterated what I’ve discussed in my previous blog about the damages associated with floods in one anecdote. Ranjana lives in Samagudi village of the Karatipar Panchayat. She has a family of five members. In the year 2016, the family lost all of their land due to erosion. Now they have built a small hut which is a temporary settlement built on someone else’s land. Agriculture used to be a major source of living; now the only man of the family is the bread winner. He works as a mason and supports his family through the daily wage. The two adult women in the house are skilled in weaving cloths. However, due to lack of resources, their production is too small to generate significant income. They are traditional weavers and can make cloths of most exotic silks of very high value from their home based handlooms. Whatever difficulties this family is facing, it is tough to trace the worries on their face while talking with them. I believe it is mostly due to the apparent cheerfulness and resilience in this community around.

Inspired from the women like Ranjana, we designed a livelihood project and named it RIHA. RIHA is a stole like garment which women in this part put up while they work. The primary task was to enable the weavers get a fair return on their products. Doing the market linkage of the products from these weavers was not difficult as their skills and designs are well known. It is believed that designs put on the Mekhela Sador (a traditional women wear in Assam) by the women of Mishing tribe cannot be done by any other. The difficulty, rather, was ensuring the timeliness of the order delivery. The age old handlooms devices that they use take a lot of time. These handlooms have a lot of scope for its up-gradation. Currently, RIHA is processing their first order of 600 stoles which is to be exported to foreign countries.

The launching of RIHA provided space to celebrate the culture, and the outcome was an overwhelming welcome of RIHA by the community. Despite facing disaster every year, this community has the capacity to dance over the disaster, and it is this quality that will make RIHA a great success in the coming time, thereon uniting people to face disaster collectively. It is the community led approach that has it receive such a huge response. At present RIHA has been able to mobilize 35 self-help groups comprising of about 450 members across the Panchayat. We are taking steps to give RIHA a form of weavers co-operative.

Why is  RIHA Important?

RIHA is a movement in the making. This movement is important because a lot of the local issues – which in a way is their rights – is not being addressed. For instance, the land erosion is still not considered as a form of disaster, which prevents the right compensation to the people losing their land. RIHA will grow with the community, and in its every step it will seek to unite them. It will serve as a platform for the community to discuss and raise their voices collectively to bring a solution to common problems. Collective response could be crucial in dealing with situations during floods.

Being born and brought up in India, Dharamjeet is excited to contribute to the society through working for a social change. He sees AIF as one great learning opportunity. The experience of working with organization already established in social sector and sharing of the ideas with other enthusiastic co-fellows that could be a milestone towards his own dream project for social change, he believes. Through this fellowship, Dharamjeet intends to explore himself while working for a social cause and in the end discover a better self. He also wants to achieve hands-on experience of working with an organization and build a strong network with fellows to work in future for a social change. Dharamjeet has a post graduate degree in development. The course has trained him in doing researches and designing social intervention. He hails from an agriculturalist family, an upbringing and knowledge that he feels would help him in this fellowship.

One thought on “Building Livelihood by Celebrating Culture”