We climbed to Dharamsala and met the highest Lama…

The first time I met the Dalai Lama, it was purely coincidental, just like the second time I met (well, sort of) him. The first time was at the backstage of a conference in California, where I had just listened to him speak and had ducked out to use the restroom only to find him in the hallway later. No words were spoken but the awkward Namaste and head bowing on my part, somehow lead to his smiling face and hands. I felt blessed and still get goose bumps from that memory.

The second time was during my exposure visit to Jagori Rural Charitable Trust in Dharamsala where Cassie (an extraordinary co-Fellow and friend) is placed. I am still in awe at how well Cassie managed 10 Fellows and Sridar for three days and gave us an unforgettable exposure visit. It was my first trip to Dharamsala and I was looking forward to the mountains, which I desperately missed in Mumbai.

While in Dharamsala, Cassie found out through a friend that the Dalai Lama was offering a teaching in English to foreigners. We were all to fill a form and submit a copy of our passport prior to the next day teaching. Everyone had their passports with them except for me. I tried submitting my California driving license instead, but was turned down. The team handling the event said they would accept a copy of my passport as long as I brought the original the next day. That was going to be a major problem since my passport was safely tucked away in a safe in Mumbai! I decided to try my luck anyways.

The next day we queued outside Dalai Lama’s temple around 6am. The line was LONG, as expected and SLOW, but we had each other to keep us company and yummy warm Tibetan bread for nourishment. We started concocting all sorts of plans to trick the security guards into not checking my passport. I carried a very large color copy of my passport and was ready to plead my way into the gates if questioned. Mohit assured me that I would get in because I had him. He has “this is India, and I can talk anyone into doing anything” attitude that has worked in his favor many times. Finally, Ilana and Cassie decided that they would submit all the applications and passports together to overwhelm the security guy into not doing a thorough job on the passport checking.

Overwhelming was quite an understatement. When we reached the security line, it clearly looked like the security team was not anticipating 2,000 people to turn up. When it was my turn to go through the metal detector there were no mentions of passports so I just mixed in with the sea of people and was officially inside the compound! Hurray! I can’t quite explain how accomplished I felt and how grateful I was to have such clever friends.

Before the program began, the Dalai Lama took pictures with groups of tourists all arranged according to their countries of origin. Clearly, that was not a good way of segregating for AIF Fellows and especially Sridar, who wanted all Fellows to be in one group. So, we piled on with the Indian group- American and Indian fellows together (I am sure confusing the heck out of a few.) Which definitely turned out beautifully, especially since the Dalai Lama spoke about the importance of not focusing on superficial differences but rather to champion all things we do have in common, which unites us. He also spoke about respecting each other’s differences and to have tolerance and respect for each other’s beliefs and values. True happiness lies in making others happy and that is the basis of peace. So, the highest Lama believes that the very purpose of our life is to seek happiness and if there is one goal we achieved during this exposure visit, it was, beyond a doubt, just that. 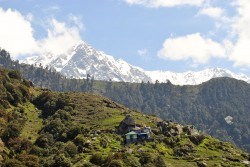 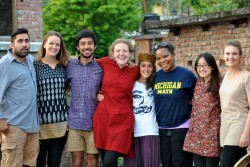 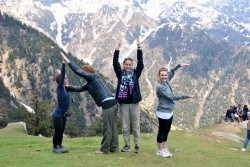 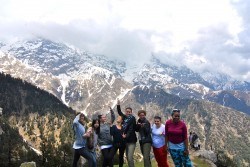 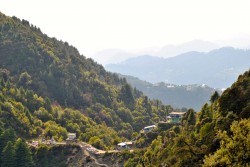 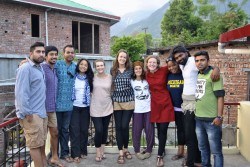 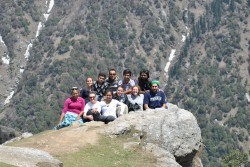 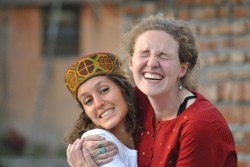 Srijana started her career working in Global Policy and Government Affairs department at Cisco Systems where her role was to identify public policy priority needs in sub-Saharan Africa and define Cisco's policy engagement strategy. Additionally, she was a key player in the development and management of Cisco's environmental sustainability program. She created and drove company wide employee educational campaigns geared towards environmental sustainability. Srijana is also a founder of Friends of El Shadai, an organization based in California, which gives educational opportunity to former street children and HIV/AIDS orphans in a loving home environment in Bugembe, Uganda. Friends of El Shadai recently funded the construction of a building for El Shadai, which 35 children now call home. Through her experience working with Friends of El Shadai, Srijana realized that demand based skills training is just as important as education in countries like Uganda, where unemployment rate is very high. This realization led her to leave Silicon Valley and spend time in India and Nepal researching opportunities to create jobs for individuals living below poverty. After 8 years of working in Silicon Valley, Srijana is delighted to be part of AIF fellows and hopes to bring together her business and public policy experience, with her personal passion for working in development and economic empowerment. In addition to Friends of El Shadai, Srijana is active and on the Board of Sahayeta.Org, a nonprofit based in San Francisco that she co-founded. Sahayeta.Org provides free primary health care screening for immigrants without health insurance and connects them to additional resources, if needed.