It all started by running in heels.

I spent my first few days in Chennai horrified by the danger in which adolescent boys and young men put themselves to catch a bus! They run along-side a moving bus, grab hold of the door frame, and are air borne for several seconds before landing on the bus and scrambling to make way for the fellows behind them about to do the same. Internally, I promised myself never to take such a risk. I valued my life and the possibility of being trampled by traffic was less than enticing..

Chennai, day 4: Nicole and I left Spencer’s Mall exhausted after a long day at work and exploring the city. Just a little longer, I tell my aching back as we shuffle down the long bus platform. There it is, bus 23C. In 20 yards I can put this bag down. Suddenly, the bus started to leave.

We were going to catch this bus. Nicole immediately understood my determination and ran ahead to the bus’s rear entry. Run run run. Grab. Leap – SUCCESS! A glance to the back of the bus showed that Nicole had also made the jump successfully. OMG, I had actually boarded a moving bus…in heels.

Since that first welcome, the bus has become my faithful companion, never failing to offer a small adventure or insight into the minor miracles of South Indian life.

o The miracle of buying bus tickets: Remember Telephone? Kids play at birthday parties, sitting in a circle and pass around a secret message. The game is successful if the message is the same at the end as it was in the beginning. Indian bus passengers play this game daily.. When the bus is too crowded for the conductor to walk down the aisle and collect fare, which is often, bus patrons pass each others’ bus fare down to the conductor and simultaneously “telephone” the corresponding passenger’s destination. The appropriate ticket and any change is passed back accordingly – sometimes through forty hands, to its owner. No one steals, no one cheats – and no one says thank you. It seems that one’s participation in this act is regarded as a duty, not as a favor, and therefore, since you would and most likely will do the same for the other person at some point this month, thanking them is unnecessary.

o The miracle of honesty: This sense of trust and duty also applies to baggage. If all the seats are taken on a bus, you should hand your bag to the nearest seated aunty to hold for you until you get off or get a seat. Otherwise, your bag takes up valuable standing space. You can have a lap top, an ipod, and a hefty chunk of change in your wallet, and you may rest assured that it will all still be there when you take your bag back.

o Poo is the best remedy for a sweaty, smelly bus. South Indian women put “poo” or flowers in their hair. Jasmine is most common, but roses and a yellow flower called manjal kanakambarum (no idea what that is in English – it might be related to marigolds?) are also used. And they smell AWESOME.

o Chennai to the rescue: The Tamilian sense of community is especially evident when things go wrong. One day the bus flew over a speed bump, rendering us airborne for several seconds. The – rather large – aunty sitting next to me hurt her chest on the chair back in front of her on the way down. Instantly, my half the bus – about 50-70 people – was involved in either trying to help this woman, screaming at the conductor for the driver’s recklessness, or trying to keep the commotion from getting out-of-hand. That would never happen in New York.

o Who needs bars? Chennai’s bar scene is minimal, so the bus is the place to meet people! I’ve met quite a few interesting characters on the bus – some of which have actually become friends! My most significant bus friend, a college student studying naval engineering, recently got me hooked on the Twilight movies…I’m still not sure if he’s a positive influence…

o Small small things: One day, a man sat next to me on the bus. (In retrospect, this was strange, since I was sitting on the women’s side.) He turned out to be a student at IIT Madras from Delhi who, unlike most northerners, loved Chennai. “There are small small things to enjoy here! Like women with flowers in their hair, these traditional dresses, families roaming around on the beach…” He’s right. Chennai lacks the hip night life that Delhi and Bombay boast, and North Indians that come are often bored by Chennai. But the city has a magic all its own, the most vibrant of which is seen in the smallest things: paper stars hung for Christmas, the chai-wallah that knows and expects me every morning, a free ride from an auto-wallah in the rain, and my eleven-year old neighbor who belts out Michael Jackson tunes a little too early in the morning, and of course, leaping on to a moving bus in heels. 🙂 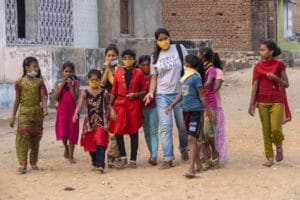 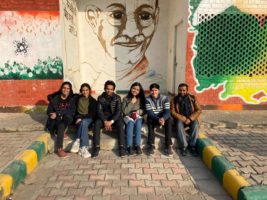