I am a big fan of taking trips alone once in a while. No dependence on other people, great time for introspection and the freedom to stay quiet in peace without filling gaps of time with unnecessary words that cloud clear thoughts. So when opportunity came to go off into the dawn with a bundle hanging from a stick (visual proverb), I sacrificed sleep and set out for a very mediocre adventure; or so I thought.

The Sunday morning, 6.20 train to Rameshwaram was overflowing. I made the mistake of arriving only half hour early to fight for ticket and seat. After walking the train’s length, twice, I squeezed into a corner between five others. I invoked my ability to sleep under all conditions and got some shut eye sitting between the inquisitive man and the grandfather reading the newspaper. Dal vada breakfast at a random station was welcome. Railway station food has held a special place in my heart since my college days. Inhibitions, manners and respecting one’s personal space are automatically suspended.

After staring at fields, hills and track-side homes, which constitutes railway tapestry, the scenery changed to a monochromatic blue. The change invoked a pleasant shock and indicated proximity to the destination.

First Sight Of The Sea

The Rameshwaram station was particularly unspectacular, barring one difference which I would later notice as a trend throughout the city.

Goats! Goats everywhere! They seem to fill the space left by dogs. This uncharacteristic change in the caprine Modus Operendi was quite puzzling; I have not been able to figure it out till now.  Maybe the dogs were just fought off, maybe the popularity of vegan culture internationally gave rise to goat-power, and subsequent dominance over the canine. Pardon me, I digress. I walk outside the station and no sooner than five minutes I saw my first fight of the day (I saw at least three). Head butting for dominance over a piece of ground. I speak literally of course; Little Goat was seeking dominance over Bigger Goat in sort of a “Mera Hai” syndrome you tend to associate with tiny Tendulkar wannabes fighting over ownership of the batting crease. 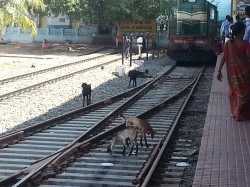 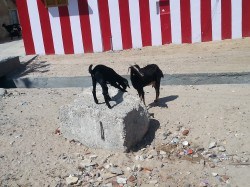 I caught the bus to a place whose name I memorized phonetically – “anoos kodi”.  Thankfully, speaking the name fast enough to the conductor masked my utter ignorance. The Bus journey was quite interesting. Though there was nothing special about route itself, sights of ocean on both sides of the road was quite special. The last stop for the bus accompanied the point where the road builders stopped working. Thankfully I found an English board reading “Dhanushkoti” that helped me sound less foolish, here on. There were shacks at the stop catering to people’s thirst, hunger and coastal fashion needs. 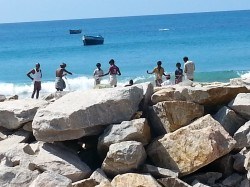 Dhanushkoti; the closest point to Sri Lanka from India 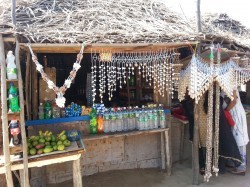 She really does sell seashells on the seashore

Diving into a bit of history – Dhanushkoti today is an abandoned spot, a ghost town, because of the devastation which it saw in the 1964 Tsunami. It is also the spot where the famous Ram Setu (Adam bridge) connects India to Sri Lanka laid by Hanuman’s ape army. Today the spot is popularized as such, even though the rock bridge has been underwater for eons.

To get to the abandoned ghost town part of Dhanushkoti, I could either fancy a walk in the scorching sun on sand for 4-5 kms, or take one of these mini buses which were stuffing people in like turkey stuffing. I got to sit right up front with the driver; right next to him; on the clutch board, with my knees in my chin and crotch facing the radio, close enough to unintentionally smell the driver’s sweat stained shirt – Unpleasant. The roads presence was made conspicuous only by its absence. 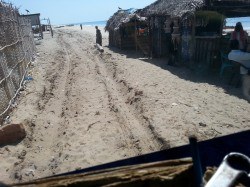 If We Can’t Find A Road, We’ll Make One

We embarked on our journey on this camel on wheels by first taking a known route, only to give it up a few hundred meters in to start our on journey on no worse a patch of land. The driver expertly knew the depth of every depression filled with seawater. Later we would see sea-moss stuck on the door handle. 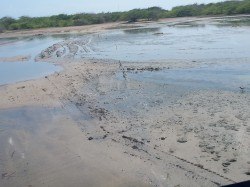 NOT A Road Less Traveled On

Improvisation was the need of the hour, but surprisingly obvious requirements such as a working clutch plate were deemed unnecessary by the driver for a van for twenty hauling a hundred people. Murphy was clearly looking down at us. As we were passing though the ONLY pass wide enough to fit a vehicle, the clutch plate broke. Not to panic as the driver knew EXACTLY what had gone wrong and he sprang to the task. One must question how frequently the said lapses occur though. However, this is when we started actually observing the surroundings we were in.

I got off the bus to stretch my legs for a while and to take a look around. Shallow water spread till the limits of my horizon. The bright sun gave it a mirror like surface. A jeep was creating its own path, a hulk of a boat incapable of keeping the water out sat leisurely on the beach side and tire tracks, both to and fro made up this picture of serenity. Something was happening at that moment, though I hadn’t quite figured out what exactly. Anyway, the driver displayed his magic touch and the vehicle was fixed, at least for the time being. 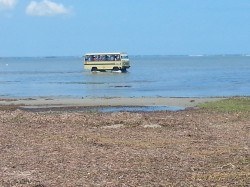 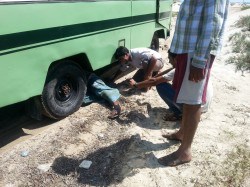 On we went to our final spot. A couple of kilometres hence we came to a spot with a fair number of buildings around, with no sign of habitation. Well buildings might be a stretch – they were closer to carcasses of buildings. When someone uses the words ‘carcasses of buildings’ a heap of cement and metal comes to mind. However, this sight was way more sinister, in that their frames were still standing. A slight breeze could topple them over, but it doesn’t. Beach sand didn’t really add to a festive feel, but I guess it wasn’t supposed to. After walking through the warm sand for a while, I came across this beautiful steeple-esque structure. An old church, rather a skeleton of such, looked like some old excavation on a Greek island which was used as a hideout during some Persian invasion. The beautiful sand helped with the image. 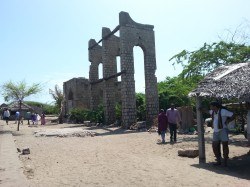 Families had traveled from all over India to this spot to see where the Ram Setu is supposed to be. As is in religious spots in India, even in this ghost town I found a make shift temple with a place for donations. Right across the temple there was a dump of plastic. This part of the trip was truly disenchanting. 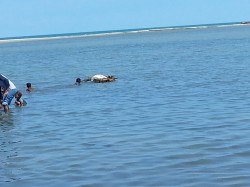 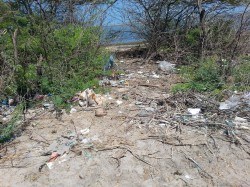 However, an involuntary smile pulled on my face upon seeing this royalty. Something about a goat just chilling on his/ her knees just brings all vexations to a halt. Some locals were putting up a perimeter to catch fish. Other fishermen were going through their net to mend the torn parts. 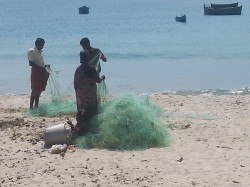 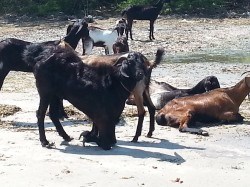 This whole setting had an eerie feel to it. Though I couldn’t capture what this moment meant to me immediately, it had a special meaning. Each instance was a creation and enactment of what was not supposed to be. The sand I walked on should have been a crowded road with intense traffic leading to the railway station. The shacks set up might have been people’s homes, and goats might not have had the freedom to walk around on sand, but might have had fresh grass in a cage. These layers of what is and what should be can I guess occur in all situations – big cities and villages. Maybe what I saw was just one possibility, and another was meant to be. Or this is the right sight, and as I can realize it, I wonder what the alternative could have been. In either case, I don’t think I would change a thing about the moment. Maybe I would change the fact that I needed to come to a Ghost Town to realize it. 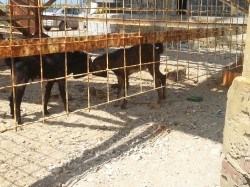 After graduating with a Masters from Duke University, Nikhil joined Deutsche Bank's Investment Banking group in New York. Following four years of work in the Financial Services and Consulting in New York, Nikhil, taking the advice of some of his favorite authors and innovators, moved back to India to learn about the disruptive nature of innovation. Within an year of traveling, Nikhil interacted with start-ups, social and tech entrepreneurs, and people pursuing interesting projects from across the country. His interest in innovation let him to join an innovation-consulting firm in Hyderabad. Most recently, he designed strategies to help rejuvenate the Microfinance business for one of the leading livelihood promoters in India.

10 thoughts on “Company In Solitude”