Meet Afzal: aspiring pilot/actor/dancer/doctor, fluent in 4 languages, owner of a ridiculously charming smile, and, most importantly, my Tamil teacher. 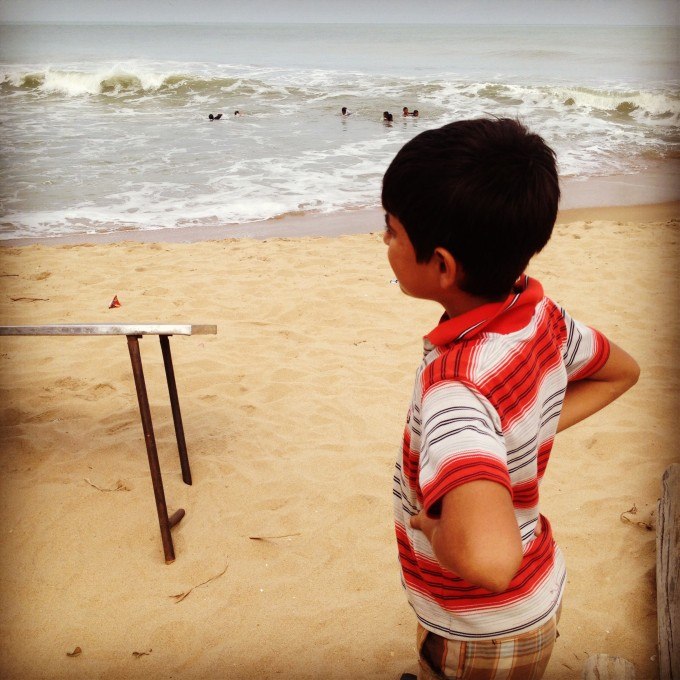 I met him, about three weeks ago, on my first day working at the Kovalam Health Center. The Kovalam Health Center is a project of The Banyan, an organization that works with persons with mental health concerns living in poverty and homelessness. I was sitting at a desk when Afzal walked into the room holding the hand of one of the patients. I wondered why he, a 12-year-old boy, was accompanying this woman around the building. He stood there in silence as the women spoke to me. I didn’t understand anything she said. To my surprise, Afzal started translating. The women, who I later learned is called Usha, wanted to know who I was and why I was there. Good question, I thought to myself – why am I here? (I think I’ll have to leave my answer to that for another blog post.) – as I told them that I was a new member of the research team. She wanted to know where I was from. “America,” I said. Usha nodded as Afzal shifted his gaze back and forth between Usha and I, smiling apprehensively. Just before they walked off, I asked the Afzal why he was escorting Usha.  His smile grew as he looked up at her, asserting, “She is my mom.”

This reversal of roles – a young boy serving as a caregiver for his mother – was surprising to me. I was intrigued and wanted to learn more. I asked the staff at The Banyan about their story and slowly started to piece it all together. Usha is thought to have been born with a mild intellectual disability. At the age of 16, she was married. Shortly after, in 2001, she gave birth to Afzal. It was during this period that she started experiencing symptoms of manic-depressive disorder. As a result, she was chained and beaten by her husband. When Afzal was about three months old, his father took Usha to her hometown, Ajmer, Rajhastan, to leave Afzal and Usha with Usha’s family. However, Usha’s husband could not find her family so he left her chained up at a Dargah in Ajmer.

At some point in 2002, Usha was found in Chennai. No one knows how she got there. She was brought to The Banyan’s transit care center, Adaikalam, for care and treatment. After spending about a month at Adaikalam she was re-integrated with her mother, Mishti, in Ajmer. The Banyan shipped medication to her home. However, even though she was receiving her medication, Usha’s family found her difficult to manage and often chained her up. The Banyan heard nothing from Usha or her family for 7 years. It turns out that Usha and her family had moved to Kolkata, West Bengal and, as such, stopped receiving the medication that The Banyan was sending. Then, in 2011, in an act of desperation, Mishti brought Usha back to The Banyan as her condition was getting worse. About 9 months later, Mishti brought Afzal to Chennai to stay with his mother.

Since their arrival, Mishti, Afzal, and Usha have been absorbed into the Banyan Family. Mishti currently works as a housekeeper, gardener, and cook at the Community Living Project. Usha stays in the Kovalam Health Centers inpatient unit or, when her condition gets worse, at Adaikalam. Afzal lives at the Kovalam Health Center and is financially supported by The Banyan. He goes to the local school and often sleeps at home with Ram, the coordinator of the Health Center. This is what it takes to care for the marginalized and mentally ill in India — a inclusive and comprehensive approach that truly integrates family. And there are so many other stories like this at The Banyan; so many stories of integration and formation of community. The other day I met a volunteer social worker at one of The Banyan’s urban clinics who has decided to spend most of his time volunteering after The Banyan took care of his wife. Many of the individuals who work at the Health Center in Kovalam are former patients. I’ve witnessed homeless men serving as caregivers for other homeless men at a government hospital. The ways that The Banyan penetrates the lives of the so many – extending their reach beyond just their patients – is beautiful and heartwarming.

Everyday I spend some time with Afzal. One day he introduced me to all of the dogs that reside at the Health Center, including the most recent addition — five adorable puppies. Another day we went to a surf competition at the local beach. We have plans to take a trip to the Chennai city center soon. I’d also like to paint with him. I want to ask questions about what is like to have a mother who suffers from a severe mental illness. Sometimes I probe a little – asking questions like, “When is the last time you spoke to your mother?” – but I am too afraid to ask questions directly related to his mothers illness and how it affects him. It doesn’t seem appropriate, at least not yet. So I ask more general questions. Questions to try to understand him better. What do you want to be when you grow up? Where do you sleep? What city do you like the best? What language do you feel most comfortable speaking? Slowly I am getting to know him.

As I speak with and observe Afzal, I keep looking for signs of hardships he has faced growing up. But I don’t find them. I’m in awe of his resilience. For sure, I think he has learned to mask his suffering. But, also, I think what The Banyan has done for him cannot be discounted. He has a community, a family at The Banyan. Instead of living on the streets, which surely would have been his destiny had it not been for The Banyan, he is going to school, eating three meals a day, and dreaming of a bright future.

I’ve been drafting this blog post in my mind since the day I first met Afzal. I thought to myself, this story really captures what The Banyan is about – an unconditional and limitless effort to support those who are suffering from homelessness and mental illness. What a romantic story, I thought. And in many ways it is. It is a story of story of triumph and success in the face of remarkable challenge.

And the story kept building. Last week there was the talent show at the Health Center. Of course, Afzal performed. Ah, yes, this is great material for the blog post, I thought to myself. Everyone watched Afzal with as he danced with the grace of Prabhu Deva and a pelvic thrust that could only be matched by Mithun Chakraborty. I saw Vandana, one of the founders of The Banyan, smile with joy and imagined the sense of pleasure she must have felt in that very moment.

Then it all blew up. Out of nowhere, Usha picked up one of the puppies and threw it against the wall. She then proceeded to physically attack members of The Banyan staff and chase after Afzal. He responded as if nothing happened. Her outburst was likely a cry for attention after watching Afzal become the star of the show. After this incident they took Usha to Adaikalam, so she could receive 24-hour care and support. This was a not a failure on the part of The Banyan. This was a humble reminder that treating mental illness is hard. It is an ongoing effort.

This story, I think, exemplifies two main features central to treating mental illness in India (and anywhere around the world, really). Firstly, treating mental health takes a long-term, committed, and inclusive effort. Mental illnesses are often chronic and even if symptoms do go into remission, there is always a need to stay diligent about the potential for relapse. Treating mental illness takes an unconditional commitment. And that is what The Banyan offers. Secondly, caring for those with a mental illness is always more than “just” treating mental illness. As we can see in the case of Usha and Afzal, mental health is inextricably linked to poverty, domestic violence, pernicious gender norms, and many other issues. Caring for those who suffer from mental illness takes a concerted, interdisciplinary effort that, I believe, must link service and research that unravels the complex links between all of these complex domains. This, again, is another area in which The Banyan is clearly committed to.

Engaging with diverse communities across three continents has given Ned an appreciation for the complexity of human experience while fostering a passion for social justice and health equity. As an undergraduate in New Haven, Ned pursued a combination of ethnographic research and outreach work that sought to understand the lived reality of homelessness as he accompanied men and women who fell between the cracks of the social welfare system. After graduating, Ned spent a year living in Tanzania working with the Ministry of Health and Social Welfare designing and implementing cervical cancer screening and treatment programs. During this period, Ned had the opportunity to live in the outskirts of a Tanzanian slum and ethnographically study the experience of social marginalization. Following his year in Tanzania, Ned started an MPhil in Medical Anthropology, where he is writing a dissertation that explores the interface between the social and biological frameworks for conceptualizing 'mental illness' in India. Leading up to this research, Ned spent three months in Bhopal, Madhya Pradesh working with Sangath, an NGO, on a research project that is developing evidence to determine the most effective methods for offering mental health care services in resource poor settings. Moving forward, Ned's aspiration is to split his time between America and India as a physician-anthropologist professor living a purpose driven life that links scholarship and service.