“Cultural Heritage can itself be a ‘trampoline’ for social and economic development, in the same way that agriculture, water resources, power supplies or transportation systems have traditionally been perceived… the case is proven in my mind that cultural development can contribute, in unique and distinctive ways, to the human aspiration for a better quality of life.”

His Highness the Aga Khan addressing speaking at the UNESCO Conference on Culture and Development (May 2013 Hangzhou, China) 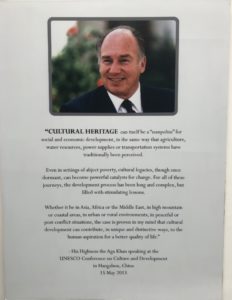 Every day as I walk into my office, after passing 400-year-old tombs and a few UNESCO world heritage sites, I see these words hung boldly on the wall under a picture of Prince Shah Karim Al Hussaini, otherwise known as Aga Khan IV. Al Hussaini is the 49th and current Imam and Aga Khan of Nizari Ismailism as well as the leader of the Aga Khan Development Network.

When I first saw this quote back in September, I admit that I did not think much about their meaning. Although they seemed interesting and important, they did not seem radical to me. Rather, the Aga Khan appeared to be laying out a simple and direct mission for his network: utilize conservation to achieve development.

However, having now worked with conservationists, social workers, designers, architects, teachers, health workers and a variety of other professionals for about 6 months, I have come to understand this mission not as naturally occurring or easily obtained. Rather, it results from a purposeful mindset that views conservation not as an end in and of itself, but as a tool that can be used to cultivate a more just and equitable society. More than development, the Aga Khan is claiming that culture and heritage can actually contribute to personal empowerment; to making people stronger and more confident, particularly when controlling their life and individual rights (Oxford English Dictionary, 2019).

Upon further reflection, I started to see this claim as nothing short of bold. Can making sure that old buildings, tombs, stories, music, recipes, etc. really help someone control their life? To claim their rights as a human being? I love visiting historical sites and learning about a new community’s traditions and ways of life, but is it possible that these things can actually empower people? Can and should heritage be a tool for bettering society?

While statistics and published research are certainly important when considering these questions, I particularly enjoy learning about people’s individual and unique experiences. Therefore, to understand my questions more, I turned to two colleagues that I have had the pleasure of getting to know during my time as an AIF Clinton Fellow.

Ujwala, a conservation architect, and Swati, a development professional, seemed to offer the perfect combination: one individual who works in conservation and one individual who works in development. Two separate arms of the same organization. However, during my conversation with each of them, I came to see that despite their drastically different areas of expertise, they both view their work as intertwined with the other’s. From these perspectives, I have learned that conservation projects which preserve local heritage in physical, social and cultural ways can in fact empower the impacted communities to claim their agency and effect change in their society. In other words, conservation empowers people.

As I spoke with Ujwala, I learned more about her responsibilities assessing monuments and tombs, developing plans for their conservation and ultimately supervising the craftsmen and builders as they implement her plan. Unlike many architects, who work individually to create a plan before handing it off to builders, Ujwala works with the project until its completion.

“We believe that the craftsmen are a really big part of the conservation, especially because they understand the material better than anybody. I mean they’re the ones working with it.” (Ujwala Menon, interviewed by Daniel Soucy, February 6, 2019 Delhi, India).

As a result of her multidisciplinary role, Ujwala sees what might be thought of as the first contribution of heritage conservation on development. Regardless of a conservation project’s impact on the surrounding community, it empowers sources of livelihood that would be otherwise unavailable for traditional craftspeople. Not only this, but it also brings social respect to traditional labor.

“There’s a lot more dignity to these crafts than there may have been earlier” (Ujwala).

In addition to a project’s impact on craftspeople, Swati, the coordinator of the women’s livelihood initiatives that the Aga Khan Development Network’s Nizamuddin Urban Renewal Initiative created, also points to the pride that conservation contributes to individuals and communities that have lost their agency.

Traditionally, many of the women in the Nizamuddin Basti came from financially poor communities and are extremely dependent on the men in their lives for survival. As a result, many of the women who Swati works with are extremely aware of their need to make money for themselves and their families. Despite this, Swati notes that the women have been willing to fight through their self-help group’s financial difficulties because they value the social respect it brings them and take pride in the community craft and food traditions that they draw from.

“It’s really important for them to earn but I have also observed in times they are not able to earn…they have stuck around because it’s not only income that they are getting from the group. They are getting recognition, they are getting pride, they are getting visibility and they are getting confidence. So imagine what they feel when their food is being praised and when clients call them and say, ‘bahut accha khana hain’ [the food is very good]…so they would never get all of this in their other jobs” (Swati Batra, interviewed by Daniel Soucy, February 8, 2019 Delhi, India).

“A lot of times what happens is that conservation is seen as this stand-alone project but invariably when you are conserving a monument you are affecting the local neighborhood…A lot of your identity is dependent on your built heritage as well. In many ways conservation ends up building identities or creating identities” (Ujwala).

The logic goes something like this: Ujwala’s conservation projects gives social value to a previously ignored space and history. In turn, during her field work in the community, Swati encounters more pride in the women she works with and as a result, more devotion to maintaining the development-oriented projects like community toilets, public parks and economic empowerment groups.

“I think they have become more aware of their surroundings. They have started to appreciate where they live, appreciate the historic importance of [the] Nizamuddin Basti because of all these monuments getting restored and their access to all these facilities that were not there earlier” (Swati).

Of course, the process of development is never perfect. Even utilizing heritage to empower and uplift economically disadvantaged communities causes Swati to worry about its long-term sustainability.

Sustainability must always be a consideration in any development-focused project. However, more than this concern, my conversations with each of my colleagues demonstrated to me the larger impact that conservation has. Development can come from many different sources. I think that few people would argue that it is dependent on conservation. However, the deep intersection that exists between the work of a conservation architect and the work of a women’s empowerment coordinator is extraordinary.

As I walk through the history that my office is physically situated in and that my fellowship relies on, I will continue to reflect on the hundreds of historical sites, traditions and cultures that I have had the opportunity to interact with throughout my life. What if each of these places were not there? Who would be impacted? What confidence would have been lost? How different would our neighborhoods, our cities and our larger society look if, in steaming forward toward ‘development’ we forget the physical, economic and emotional role that conserving the past can also play in these very same objectives?

History and conservation aren’t the only answer. But from my 6 months as an AIF Clinton Fellow, they do seem like a pretty good place to start.

Dan graduated with his undergraduate degree in international relations and Asian studies from Saint Joseph’s University in Pennsylvania. Dan spent four months studying at the Gokhale Institute of Politics and Economics in Pune, India, where he conducted research on public perceptions of Pune’s LGBTQ community and pursued course work on India’s political, economic and social development in the 21st century. Dan also participated in the U.S. Department of State’s Critical Language Scholarship program, studying Hindi in Jaipur. In between semesters studying at Saint Joseph’s, Dan thoroughly enjoyed working for the International Institute of New England, where he assisted in the resettlement of refugees in the greater Boston area. In addition, he interned with the World Affairs Council of Philadelphia where he taught youth in under-resourced middle schools about international affairs and prepared them for Model United Nations conferences. In his free time, Dan especially enjoys traveling, cooking, hiking and coaching athletics for children. Through the AIF Clinton Fellowship, Dan is extremely excited to further expand his experience working with youth as well as his knowledge of South Asian languages and Indian society.