Healthcare is not just about curing the illnesses but it is more about preventing illnesses by eating and living a healthy life. In today’s modern world, the food habits of people have a lot to do with the kind of illnesses they are facing. In the urban spaces obesity is more prevalent now than ever. FitHo recently did a survey of 4000 people across Tier 1 and 2 cities and the results were shocking — almost 73% of the participants were overweight and 46% (Almost half) of them were obese. India currently is the diabetes capital of the world with more than 70 million cases of diabetes already registered. Not only diabetes, Indians are at high risk of suffering from many other communicable, vector borne and chronic diseases. And with high levels of pollution respiratory problems are already on the rise in India. In such situations it is extremely important that people learn about the preventive measures that can help in reducing their susceptance to the illnesses. The most common complaints from women about their health were irregular menstruation, back ache, weakness in body.

Jagori’s work is mainly centered on building health awareness in the community. We want to build a healthy community by making sure that women in the community are aware of the major health risks they face. We are trying to promote more and more preventive practices among the women. For example, in our health camps we talk about the importance of physical exercise for the body on a daily basis, not necessarily exertive physical exercise. Just walking for a bit is enough to flex the body muscles. We lay a major emphasis on the food habits of people. A lot of women in the villages where we work are anemic because they lack iron in their food consumption, and most of them are farmers who work in the hilly areas. Since women are expected to work on a regular basis, even when they are pregnant, they suffer from anemia. A major component of my project in the next ten months is conducting regular health awareness camps. We are trying to align these health camps with the government scheme ‘Anemia Mukt Bharat’ (Anemia Free India). Iron deficiency is very common among menstruating women due to heavy blood loss during periods. In the villages where Jagori works women are doing heavy physical work on a regular basis, but the nutritional intake is not sufficient enough to supplement the amount of physical work they are doing. In a constant effort to make sure that more and more women are free from anemia, Jagori invites expert doctors who personally consult women and give them advice on their food habits. The objective is to advocate preventive household remedies. 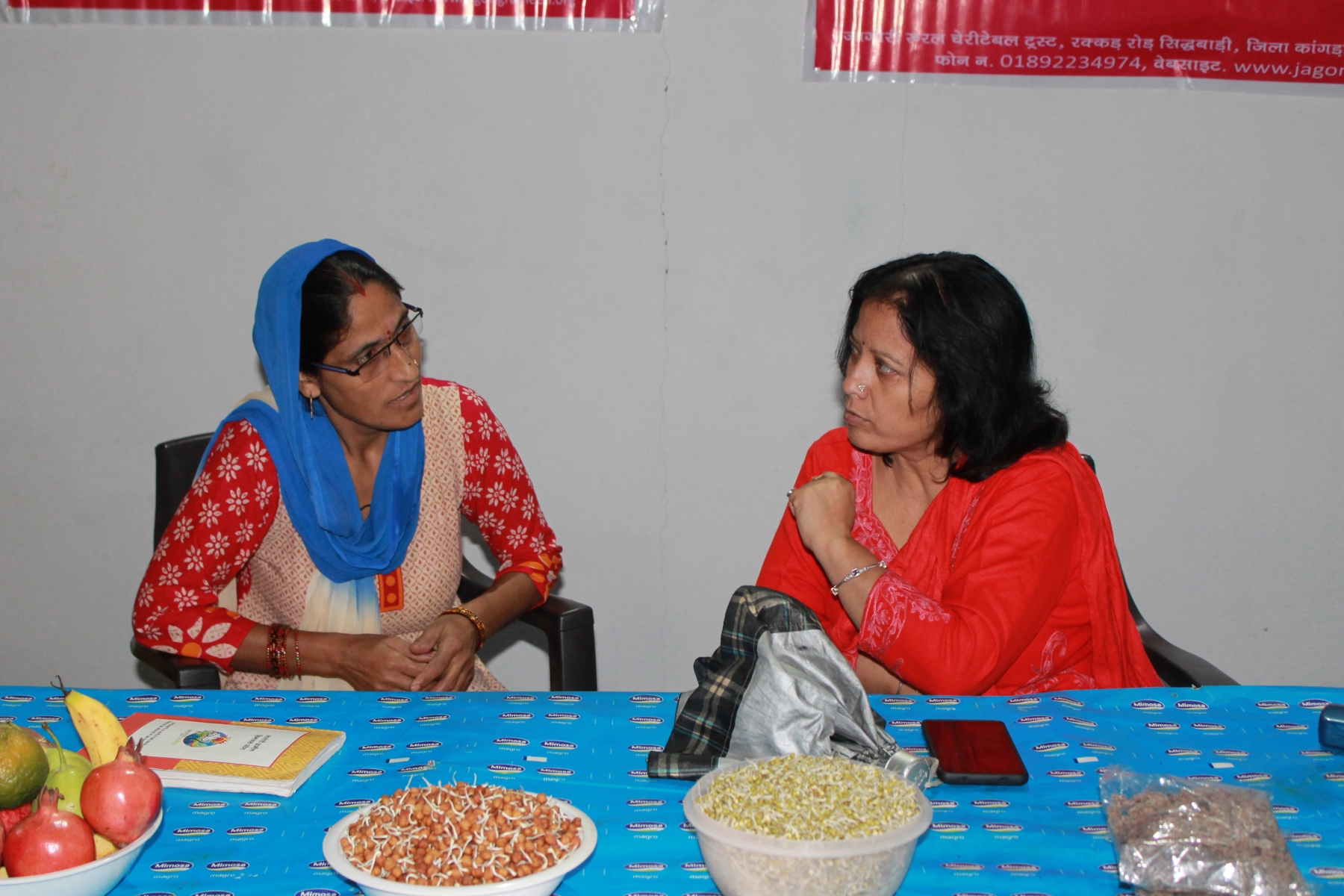 Dr. Mamta who is experienced Ayurvedic doctor addresses health from a preventive perspective. She talked about the various home based remedies and ways to lead healthy lifestyle. Diabetes is particularly endemic in the area, and since diabetes is a chronic disease, one has to struggle with it for entire lifetime. She talked about the traditional customs and food habits of people and how it was a much better and healthier way of life than the lifestyle today. She gave a thumb rule to lead a healthy lifestyle which covered biological health as well as mental health. Here are three thumb rules she gave:

Traditional food habits and lifestyle in itself promoted living a life which is disease free, and was by default a preventive approach towards all the illnesses. The advent of capitalism is what has created enormous consumerism. There is a very simple reason behind this: if there is no consumerism, people don’t earn money. And when people in power support the capitalist who thrive by exploiting the population, it gives rise to a chain reaction. One of the consequence is a negative effect on people’s health. This is precisely the reason why I strongly feel that markets should be governed and controlled by the government, assuming that government is working towards welfare of the people. Till then no matter how hard you try to raise awareness among people there won’t be much difference. And controlling markets is again not a thumb rule which can be universally applied and lead to better healthcare worldwide.  It can be applied for specific industries, for e.g.: in the automobile industry the bigger the number of vehicles, the more fuel will be consumed, which will contribute to atmospheric pollution, which leads to respiratory diseases among people. So if you have hold on the automobile industry you are indirectly contributing to the healthcare of the population.