Is it possible for you to imagine your life without wool?

Today, wool has become an indispensable part of our lives. It was one of the first natural fibres to be discovered by mankind. As winters arrive, we prefer wrapping ourselves in thick fleece to feel cozy and warm; architects prefer wool as a natural insulator for buildings and wool is also used in automobiles, stereo speakers and heavy machinery. Wool is a versatile fibre.

But, how and why did humans start using wool in the first place?

Anthropologists believe the use of wool came out of the basic challenge to survive in harsh, arid climatic conditions. Humans have sought protection and warmth from the use of wool for the past 13,000 years. Over time, sheep have been selectively bred and domesticated by humans for sustenance. Humans and sheep have co-evolved because of their intimate association for over 10,000 years.

India has seven crore sheep, the second-largest sheep population in the world according to a 2019 Livestock Census. [1] Indian terrain has many such arid regions with extreme climatic conditions that are not well suited for agriculture-based production systems. One of them is Kutch. Kutch is a kaleidoscopic land with a unique geography. The ecology of Kutch is such that the region experiences little rainfall in comparison to other parts of India. A significant chunk of the geographic landmass is arid or semi-arid.

So what do the communities of this region do for a living in this realm of aridity?

These communities choose pastoralism and artisanal production as a way of life. Nomadic pastoral herders and artisans of such regions have been creating systems for livelihood in such climatic-zones for centuries. What was just a means to get by back then, has now become an innate part of their culture and identities.

The Maldharis (pastoralists) of Rabari community maintain herds of wool-bearing animals. [2] The herders and their animals walk together for months across the country in search of pastoral grazing lands. The Maldharis provide raw materials like wool for artisan communities who make skilled products like woollen clothes, blankets, bags and other utility products. That’s how the wool value chain came into existence.

Let’s look at the wool value chain that involves pastoralists, shearers and many  different artisans: 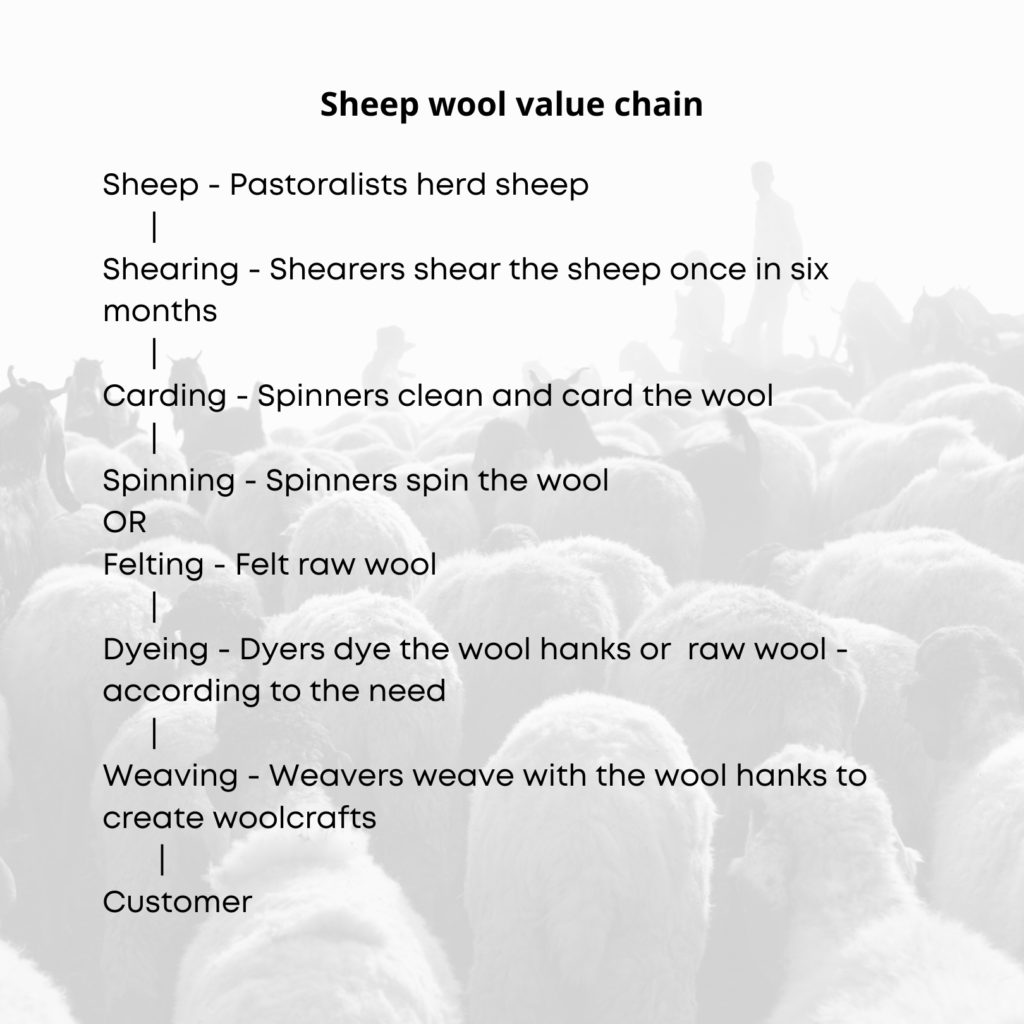 Wool from sheep is recognised as one of the most practical and versatile fibres by the Rabari community in such harsh climatic conditions. They wear indigenous woolen clothes 365 days of the year because wool keeps them cool in summers and warm in winters. This may sound strange but this is due to the insulation property of wool combined with the weaving technique that allows air to enter and pass in a certain way.

With one-fourth of the ecological footprint of synthetic fibres such as nylon, wool is one of the most eco-friendly fibres. And this is only one of the reasons to conserve the indigenous sheep of India. Wool is a natural fibre that has several properties. Woolens resist odour, stain and wrinkles, repel water, block harmful UV rays, insulate, and breathe. Organic wool has temperature regulating properties. Wool has moisture-wicking properties that make you feel cool in summer. All these make wool a great choice.

This eco-friendly fibre bio-degrades faster than most other natural fibres. Wool sequesters carbon from the earth. It is also upcycled and readily recyclable – with a market share of 1.3% of all textile fibres, wool claims 5% within the recycled fibres market share.

Every sheep herding landscape in this country, till recently, prided itself on an indigenous wool economy and thrived on local value chains. The Rabari community of Kutch contributed by nurturing an invaluable genetic resource of resilient breeds. These sheep have become strong and adaptive to the difficult geography and climate. Pastoral communities take pride in the calibre of their animals more than anything.

Patanwadi sheep is one such treasured breed, prized for its wool as well as for sturdiness. Of late, a diminishing local wool economy has led to a rapid reduction in the numbers of Patanwadi sheep. At last count, the numbers had dwindled to less than five thousand. This is due to the shift to more meat producing breeds like the Marwari which can bear long migrations, unlike Patanwadi. Uncertain climatic conditions have influenced the choices of the herders along with a host of other factors, one of them being industrialisation. The income from wool is almost zero today while the income from sheep penning has also reduced as the agricultural systems in the region are witnessing a shift to high-input and high output farming methods in which synthetic fertilisers are used.

Indigenous wool had been extremely resourceful for the local communities in Kutch. They used this wool in building homes, for their clothing, quilts, horse saddles, home furnishing and as wind-cheaters and shawls (Dhabla) for protection from severe weather. The wool products are hardy and durable. The indigenous communities in Kutch had been following the idea of circular design even before it became the zeitgeist, more so, because they understood the way their ecology worked.

…Until globalisation hit. Free trade, especially in the last three decades, has devastated these economies and systems.

The Desi Oon (Indigenous Wool) Initiative by Khamir has emerged out of the need to conserve and promote this sustainable wool textile value chain. This indigenous production system can help preserve the ancient heritage breeds as well as the pastoral and artisan livelihoods in Kutch.

KHAMIR is a non-profit organisation based in Kutch, Gujarat that works to preserve and promote crafts practices. Khamir’s philosophy is on nurturing indigenous ecosystems, skills, raw materials and artisan capacities to promote resilient, self-sustaining economies in arid and semi-arid regions.

Kutch with its large sheep and camel population had always had a ready supply of wool. Men and the women of herding families spun wool into yarn and handed it to artisans to make versatile wool-crafts.

Khamir hopes that the story of indigenous wool and well-designed hand-crafted woollen products will help sway consumer preferences and open them to accepting indigenous wool in their households and closets to promote ethical consumerism and preserve these local ecosystems. [3]

[2] Maldharis are pastoralists and are a part of the Rabari community, which is a pastoral community.

Aishwarya is serving as an American India Foundation (AIF) Clinton Fellow with Khamir in Bhuj, Gujarat. For her Fellowship project, she is designing a unique range of craft products and publicity materials to support local artisans reach new markets, increase their income, and secure their livelihoods. Born and brought up in a small town, Aishwarya always questioned the increasing dichotomies between the developed and developing world. To channelize her curiosity for social impact, she decided to pursue her graduation in mass communication. During her undergrad, she participated in the YES Foundation Media for Social Change Fellowship to learn about the impact of social media in the development sector. She did an internship with the Indian Express as a journalist and photojournalist, where she covered issues ranging from mob lynching to climate change. A stint at TEDxGateway 2018 gave her an opportunity to work with inventors from around the world, learning aobut the power of storytelling as a medium for change. Aishwarya made a documentary on the Juvenile Justice Act 2015 to study the increase in juvenile crime rate and the discrepancies between the act and implementation. In 2018, Aishwarya participated in a 15-day entrepreneurial train journey across rural India to meet social change-makers who enlightened her about the balance between social impact and profitability. This experience also made Aishwarya look at her hometown in new light: she learned about problems related to declining tourism and waste management. She founded her own nonprofit, ARTC Foundation, to solve these issues. In her free time, she enjoys reading, travel, and photography. Aishwarya is honored to be serving as an AIF Clinton Fellow to expand her horizons in the development sector.