Scarcity is an inescapable reality of our planet. There are finite resources for the use of all life forms. For humans, scarcity means that allocation of resources has to be responsibly managed to ensure the survival of all. However, sadly, the management of resources does not cater to all parts of humanity. In fact, resources are skewed towards a select few gaining the power to control wealth and public policy. The well-being of the rest is inevitably left to their discretion. In the rural sections of Madhya Pradesh, the lack of resource availability can be clearly seen amongst Korku villages. Unfortunately, one resource that is critically lacking is water, a fundamental necessity of human life. 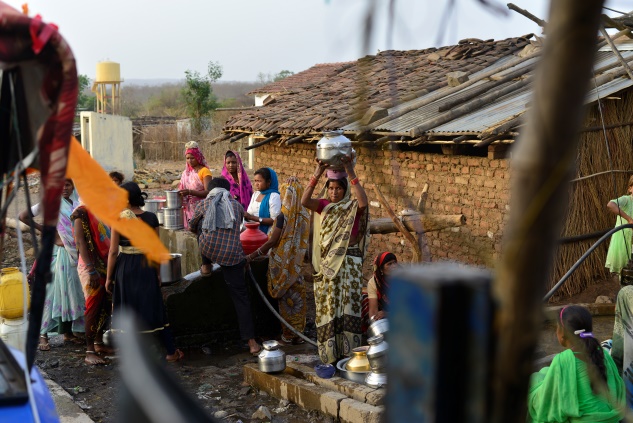 From May 11-May 20, 2018, the TYCIA Foundation and MUSHT Samaj, aided by the Rotary India Literacy Mission (RILM) and CAF India, campaigned for education amongst Korku tribal students and mobilized over 3,000 students into the Asha Kiran Program. The Asha Kiran Program is an initiative by RILM to help remediate out of school marginalized children back into the government school system. Throughout the campaign, I assisted in both efforts. Although the campaign and mobilization screening was successful, the need for water throughout the villages was acutely noticeable. I personally saw lines of up to 15-20 women to use a single-hand pump for their family’s water needs. Throughout the region, dried rivers, diminishing stagnating ponds, ineffective hand pumps, and empty wells were all too common a sight. In every village I visited, I always saw one or more hand pumps that did not work for every hand pump that did. Water for drinking, cooking, livestock, laundry, and bathing all were served by a small number of functional hand pumps. Per village, there was approximately one single-hand pump per 800 people. The scarcity of water in the region was beyond alarming. I personally felt the effects of dehydration constantly, although I consumed far more water than the villagers on average. So, to say the least, the problem is real.

In addition to noticing the shortage of water amongst villages, I also saw ways in which water scarcity could be more effectively managed. For one, there needs be better public policy in regards to damming throughout Madhya Pradesh. The construction of several hydroelectric dams across the region has drained critical rivers, tributaries, and streams that have traditionally fed villages. Over the past few decades, Madhya Pradesh has become a major supplier of electricity to itself and states around it. In addition to better public policy, the amount and methodology of water transference could be improved by creating pipelines. Generally, my observation was that water was pumped and carried by village women and girls in containers on their heads. In several ways this method of water transference is problematic. For one, women spend a disproportionate amount of time collecting water from far distances. Because only so much water can be carried on their heads, multiple trips had to be made to make ends meet. In the time used to collect water, many other tasks can be carried out. Secondly, the weight of water being carried by women is very heavy and can have adverse effects on skeletal and muscular health. Finally, as only so much water could be carried, the need to restock on water is constant.

Water scarcity is a pressing issue facing rural villages throughout Madhya Pradesh. With each year, the already dwindling water level descends even further. For the future health of inhabitants of Madhya Pradesh, effective water management is critical.  In addition to water management, any efforts made to provide better water availability, water storage, and water transportation will have a deep impact on the lives of some of the most marginalized. I can only hope to see efforts taken to improve this in the near future.

Tod is a 2016 summa cum laude, Phi Beta Kappa graduate of Morehouse College. While at Morehouse, Tod received an International Studies degree with a minor in Mandarin Chinese. Tod received the highest average in his major, and was a member of the Morehouse College Honors Program. Tod has traveled extensively both during and after college. Countries traveled include China, South Africa, Zimbabwe, Brazil, Israel, Greece, and Denmark. Tod is a 2015 Charles B. Rangel Scholar, and a 2015 Oprah Winfrey South African Leadership Program Fellow. As a 2015 Oprah Winfrey South African Leadership Fellow, Tod worked alongside various South-African non-profit organizations to spread awareness about HIV/AIDS prevention. In 2016, Tod served as a Humanity in Action Copenhagen (HIA) Fellow. As a HIA Fellow, Tod partnered with the Danish non-profit Grace KBH to advocate for and provide services to economic migrants who were primarily of Syrian, West African, and Roma descent. Tod’s time in Denmark concluded with him and other Fellows presenting a brief to Danish government and civil society leaders highlighting the social, economic and intellectual capital of migrants. After returning to the United States, Tod worked in the Montgomery office of US Congresswoman Terri Sewell providing case services to constituents in the United States, State of Alabama’s 7th district. Alabama 7th district is the state’s poorest district, and is comprised mainly of African-Americans. In his free time, Tod enjoys kayaking, archery, traveling, reading and spending time with his friends and family.