On the night of the 21st of September, I took an auto rickshaw along the highway, turned onto a dirt road, and was jostled to the gates of the Kattaikkuttu Sangam. I arrived in time for dinner and to my surprise was asked, “are you coming to the all night Kuttu performance?” I replied, “absolutely.”

Excited and reasonably disoriented, I boarded the bus with the Kattaikkuttu performers and international volunteers where were drove to a rural village where the performance was to take place. A tent was already set up for the performers to apply makeup and put on their complex costumes with wooden ornaments. They smeared and patted, brushed and smoothed, until their faces were designs of menacing, comical, or friendly characters.

Kuttu performances tell complicated stories from the Mahabharata and this play was titled “Draupadi’s Marriage” where gods quarreled with humans through moral dilemmas. The theater troop is the first co-educational residential school where boys and girls (6-18 years) learn Kattaikkuttu performance while receiving formal education. The school was founded by Kattaikkuttu actor P. Rajagopal who dropped out of school at age 10 to become a performer. He resented that young children like himself were pulled out of school in order to perform and has since worked to support youth being able to pursue academic education alongside Kattaikkuttu training. 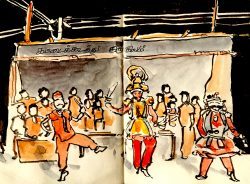 Six hours later, my back was cramped and head heavy from sitting through the performance. Demon-god characters shouted from the stage while drums popped and thumped to the accompaniment of singers, a wheezing flute, and tinkering hum of a harmonium. 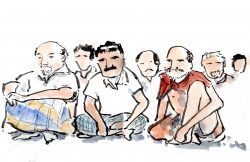 Around 4 a.m., men, women, and children in the audience sprawled out on mats or the barren earth , but the majority of the 300 people were captivated by the show. Before the show ended, I walked beyond the village on a dirt road bisecting rice paddies and palms to admire the remarkable circumstance of living in India in a world steeped in culture, artistry, and theater being used as a youth empowerment tool.

This is where I begin learning how to support the Kattaikkuttu Sangam organization. It is a social mission-driven, grassroots performing arts organization that uses the integration of academic education and performing arts training to promote, contemporize, and make sustainable the unique theatre form of Northern Tamil Nadu- Kattaikkuttu. I’ll describe the school where I live and work in a future posts, but at the moment, I am working with a group of professional teachers and performers as they create a new theater production.

The Kattaikkuttu Sangam is a place where holistic development of children is valued and practiced through academic education, supportive social bonds, and professional theater arts training. The staff, students, and mentors, Guru P. Rajagopal and Dr. Hanne M. de Bruin are hospitable friends who will are incredible resources for learning. I am fortunate to be here and will share more of my learning experiences in upcoming posts.

2 thoughts on “Evening Songs for New Beginnings: The Backdrop of Kattaikkuttu Theater”