When I write home I say that rain is the weather I miss most. Save for that unseasonal hailstorm in the middle of March one night (that was over before morning), I had not seen rain or heard thunder in eight months. But like else everything in India, even the good stuff comes with a wallop.

In May I traveled to Chennai to research the 2015 floods, the ‘worst flooding in a century’, only to find myself caught in what turned out to be the periphery of Cyclone Roanu.

For the first two days it was dreamy. The balmy air, the stormy skies, and none of that Gujarati heat. I drew nostalgic comparisons to life in New Orleans, the screened-in balconies and jasmine-perfumed air.  But by the third day waters began to rise. A holiday was declared, and interviews I scheduled had to be completed by phone. Everyone was stuck at home. My comparisons shifted from thunderstorms to hurricanes. 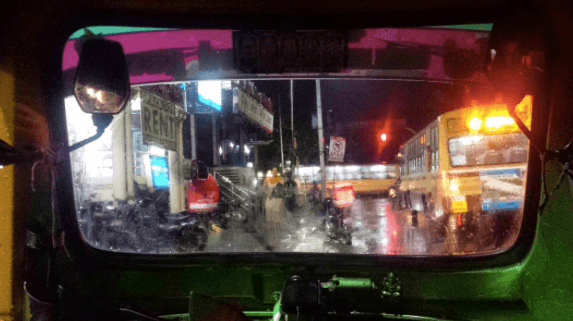 The flooding I witnessed was nothing compared to December’s, as my friends Srijan and Udayan both attested, and which I could see from the way the city continued to operate with minimal disruption. I still found people strolling the streets, ankles submerged, without umbrellas or raincoats. Weather that would have halted New York City didn’t even appear to annoy Tamil Nadu. Between downpours we attempted dinner one night and a transformer exploded just outside the window of our restaurant. A loud burst of sparks spattered against the glass and jolted everyone out of their seats. The power went out, but it was raining and so everyone stayed. We waited to see what would happen next. Nothing happened. We ate idli by candlelight and when the rain broke, we left.

But even these minor disasters produce unexpected effects, and the subject of my research became a strange reality as I lay across the couch waiting for the power to come back. I found myself reliving memories from hurricane Isaac I hadn’t thought about since 2012. Isaac was a minor disaster too, a category 1.  We suffered no property damage, no mandatory evacuation, and we lost power for only a week. We entertained ourselves the old fashioned way, four of us in my dark apartment, reading poetry to one another and watching the cheese spoil. Ours was hardly a story for national media. But the heat was insufferable, boredom and claustrophobia palpable, and the uncertainty of life returning to normal hovered over everything. It was the same uncertainty that hovered over me now.

Udayan, who had been working at his desk, turned as if he’d read my thoughts. He said, “See, Crysty? You came to get exposure and now you’re exposed.”

The rains did clear in time to see Goonj, an organization that provides clothing as part of disaster relief. They were actively providing relief to the Chennai floods, and were now busy responding to the current rains.

I normally scoff at this form of aid, having seen the way clothing overwhelms organizations that could dedicate time to other assistance, and the way it arrives unusable or for an unseasonal time of year. I’ve watched it idle away in heaps in the United States. But the young woman I interviewed changed all of the ways that I think about this topic. In fact, Goonj has been so successful at communicating need that Facebook conducted a case study as part of their crisis communications manual.  I was similarly impressed.

Initially Goonj provides relief kits for free, but as disasters transition from response to recovery and during periods of non-disaster, Goonj uses a ‘cloth-for-work’ model.  Clothing kits are provided in exchange for the community completing a civic-minded project within their society.  This can range from building bridges, clearing roads, or cleaning polluted bodies of water. Instead of charity, Goonj leverages the idea of urban waste as a development resource.

One aspect of this is clothing collection. Goonj collects excess clothing from cities and redistributes it among rural areas.  They categorize clothing donations into three categories:

Category A: ready to wear and distribute as is
Category B: requires small alterations or repairs before it can be shared
Category C: unwearable.

If clothing is labelled category C it’s stripped and woven into mats that are provided in relief kits. Over 200 women are employed around India creating these mats.

The organization agreed that it doesn’t help to donate clothing immediately following a disaster, but the reason surprised me. I assumed it was the result of more pressing needs, but was informed that it’s because most families are still displaced, living in temporary shelters or with extended family. They don’t have the space to store extra clothing. Two or three months after an event, however, when most have found more permanent housing, clothing becomes a priority. The young woman I interviewed stated that after the 2015 floods rain commingled with waste water from sewers. Entire closets were destroyed not just because they were wet, but because they were unsanitary.  I had never considered that clothing could contribute to public health concerns.

We also discussed the difference between wet and dry disasters. During India’s floods and cyclones homes might be washed away, but it’s more likely they will stay rooted while small household items such as clothing, electric mixers, text books, and school supplies are lost. For this reason wet disasters might have a faster recovery period than, say, earthquakes, but it also means that replacing smaller items takes on a more important role.

While a cloth-for-work model may not be as adaptable in a country like the United States, the concept of zero-waste most certainly is. More than just changing my mind about clothing as a legitimate form of aid, this research made me consider whether other relief that I’ve previously doubted may have potential.