January began with a particularly strong wave of writer’s block. I found myself procrastinate a fair amount and as any dawdler will understand, one can spend hours berating oneself for dawdling without resulting in any productive work.

Fortunately for me, the fellowship class was to regroup after 3 months of service as part of the annual AIF Clinton Fellowship Midpoint and Thematic Conference. This presented itself at the brink of my slow descent into seasonal gloom – the mountains, beautiful as they may be, offer little solace when one’s toes are blue and the plum cake is mysteriously consumed in entirety. The break from work and the extensive insight that I gleaned from the thematic conference jerked me out of the lull and here I am, with another blog in the making, 2 cups of black coffee down and Purcell’s Funeral of Queen Mary (strange song choice for creativity) egging me on.

I’d been meaning to write about women in this blog post, particularly, the women farmers of Kumaon, with whom I interact with as part of my fellowship. A ubiquitous sight in the mountains is women in groups of 3 carrying huge bales of hay on their heads, at all hours of the day. So far, I have only seen women do this. Over tea one evening, my mentor explained to me why.
Women in India’s agricultural landscape have had more than their fair share of hardships. For the most part, they aren’t recognized to be ‘farmers’ as most of them do not own land. However, the drudge work that goes into farming even in the smallest piece of land is relegated to women. They till the land, they sow the seeds, they de-hull the grains, they take care of livestock and above it all, they also act as primary caregivers to their children and perform household duties. The men, on the other hand, usually control the production, sale, pricing, and income of the produce- even with smallholdings.

In Kumaon, I witnessed the gendering of produce. Men deal mainly with fruits and orchards, which are the main cash yielding produce in the region. Again, the majority of the work here is done by women but the economic autonomy lies with the man. Women, however, grow another group of produce.

I Had You at Millet

When I started my project with Gene Campaign, my mentor told me that millet has traditionally been the woman’s forte. Primarily because it isn’t a cash crop, so the men weren’t interested, and it is a source of subsistence, mostly used for household consumption and child rearing. As you might already know, millet is a superb source of nutrition and happens to be used to wean children at an early age. It seemed almost ‘natural’ (I’m wary of this word) for the woman to be the custodian of millet. What is also apparent is that there is a significant amount of surplus millet produced with each yield. Now, millet is a climate resilient crop, which means even in periods of significantly minimal rainfall, one can enjoy a reasonable amount of millet yield.

One of the crucial goals of my fellowship project is to monetize this surplus produce through value addition. The value chain would be managed solely by women farmers groups in Kumaon, thus ensuring (in theory) an organized production system which can be a sustained source of income generation.

Towards this end, I have been developing millet based recipes that can be, in the long run, sold in the urban health food market. While the idea is still a fledgling one which would come into fruition many years from now, our efforts are to compile enough practical knowledge and baseline information. Additionally, we are also focusing on mobilizing the women farmer groups in the region by engaging in many community initiatives and training sessions.

While the idea seems perfectly packed with a bow, there are several valid concerns that many foresee. But… more about this next month. 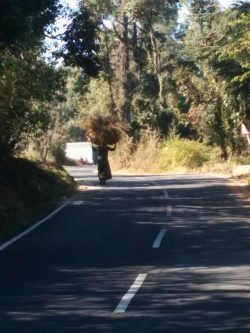 One thought on “For She Who Tills”