My coworker and I took the 45-minute scooter rider from Anjuna, Goa, to Panjim for the 2018 Difficult Dialogues conference. This year, the conversation was focused on gender equality and what that means in an Indian context. One of our other coworkers announced to the office the day before the conference, that Video Volunteers was registered and employees were welcome to attend. We read through the agenda for the event and knew very quickly that we wanted to attend. The conversation on gender equality and gender rights is a central theme for Video Volunteers and promoting women rights and empowerment is a top priority.

This conversation on gender is happening all over the world. What does it mean to be a woman or a man in 2018? How does gender as a social construct influence laws, policies, media, family, and other areas of life? What are the gender-related contradictions that we ascribe to that actually undermine gender equality? As so on. There is so much to cover and my reason for attending this conference was not to leave feeling that these questions were answered. It was simply to learn. I was interested in hearing more about how these things play out in India. I had already experienced things that caused a raised eyebrow or two but I understood that India is a country with deep-seated traditions and customs related to gender that cannot be wiped away simply because questions of gender are becoming more mainstream. 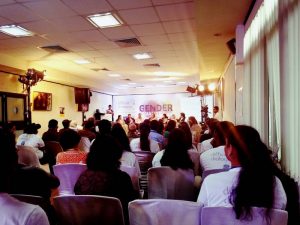 We approached the table to sign in. There were about six women “manning” the table and yet the male organizer greeted us and began to explain the process of registration. The women just handed us our materials and allowed the male organizer to continue explaining the process. I laughed to myself. This was going to be an interesting day since we were already encountering an instance of “man-splaining” where a man usurped the roles of women to get a point across without even noticing. This was a clear sign of privilege, I thought. But I knew and understood my bias. I had become overly sensitized to gender roles and expectations in India. I wanted to know, understand, and then question all of the spoken and unspoken rules. I was a kid in a candy store of cultural norms that I wanted to better contextualize.

We identified several sessions on the schedule that appealed to us one of which was “Disputing Masculinity at the Workplace”. This was something that my coworking and I talked extensively about and we were interested in how the panel would approach such a taboo topic. The panel ended up talking more about women entering the workforce and the barriers that exist. Although my coworker and I agreed at the end of this panel that it did not quite cover the point of masculinity in the workplace, we felt there were some thought-provoking points that came out in the discussion.

One of the panelists, Abhijit Das, really made some prominent points in the discussion. He is the director of the Center for Health and Social Justice, in India and Clinical Assistant Professor at the Department of Global Health at the University of Washington, Seattle, USA. He is also the co-chair of MenEngage Global Alliance which is a network of organizations working with men and boys on gender equality. Mr. Das talked about the role of men in the gender equality space. He emphasized that a conversation about gender equality that focused on just the women is lacking a very critical component of the conversation and that is, “what are the men doing?” He asked this question several times within the context of both work and domestic spaces. 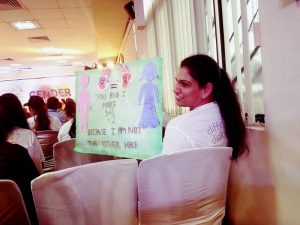 Mr. Abhijit Das shared that, “gender equality has been a crusade of women, but it should not just be for women…The missing piece of this conversation is what are men doing? Are [men] standing up or are [men] comfortable with patriarchy?” He went on to talk about the importance of this conversation being extended to men in the workplace as well as domestically. “The domestic space must become a male space as well”. He highlighted the double burden that women carry when they enter the workforce because, culturally, the responsibility of the household is still placed primarily on the woman.

I sat back in my seat and pondered Mr. Das’ words. I was inspired that it was a man who was saying this and I was excited to hear that he is having this conversation with men and boys through his organization. After the panel, my friend and I asked questions. I wanted to know more about how this message of men being at the forefront of the gender equality conversation is received by the men that he talks to.  He responded by sharing that this conversation takes time and, not surprisingly, the discussion goes over better with poorer men because they face subordinations in other aspects of life. Which reminds me of a quote by Brian Sims* that says, “when you are accustomed to privilege, equality feels like oppression.” [1]

I walked away from this discussion feeling fulfilled that we were having these type of conversations and although things will not change overnight, I am hopeful that these dialogues will spark sustainable action. I believe that we have a long way to go in this conversation but we are on the right track. I thought this was such a refreshing perspective that really resonated with some of my personal frustrations with the gender equality movement. It seems, whenever there is a need to “empower women” we get all the women together and we have conversations and trainings and somehow, we omit a very important piece of the puzzle… MEN! If we exclude men from the conversation, the stereotypes and negative dogma will continue. We can tell our daughters that they can do anything and that they are empowered to lead, but if we do not sit our sons down and tell them the same narrative, nothing will change. As Mr. Das shared, “women must raise their sons differently. Mothers are raising boys with an intense sense of privilege”. In order for a true change to occur, we must change the narrative on all fronts.

*This quote is often attributed to Brian Sims, the first openly gay legislator to be elected to the Pennsylvania House of Representatives in the USA in 2012. However, its exact origin is unclear.

Crystal is a national speaker, author and foster care advocate. She uses the arts to promote individual and community change. Crystal graduated from Emory University with a B.A. in English, Creative Writing and Theater Studies and received her MBA from Georgia State University with a focus in organizational management. Crystal has also worked with child welfare organizations in Georgia in the areas of marketing and communications, strategy and implementation, fundraising and community mobilization, and training and curriculum development. She has also volunteered as the theater director for the teen ministry of an international ministry. Crystal has served as a member of Georgia Governor’s Council for child welfare reform, she is certified in Life Stories® Theater curriculum, and she is a founding member of an advocacy group for foster youth in Georgia called Georgia Empowerment. Crystal is also a young fellow for the Jim Casey Youth Opportunities Initiative through the Annie E. Casey Foundation. Crystal has traveled the nation as an advocate for foster children and uses her gift of spoken word poetry to challenge and motivate audiences. Crystal’s mission is to inspire people to use their gifts for good to leave their mark on this world in permanent ink.