Addressing the gathering, AIF Country Director, Mathew Joseph, said, “Building on the success of robotics labs in Madurai’s Corporation schools, AIF’s Digital Equalizer program is now looking forward to scale it further so that more children can experience the digital transformation in their classrooms. We are indeed very grateful to Madurai Corporation for their support.  We are now developing the tools and training needed to enable cost-effective replication and are delighted that HCL Foundation is supporting us in this initiative. Our children can dream bigger when technology and education find a meeting point.” 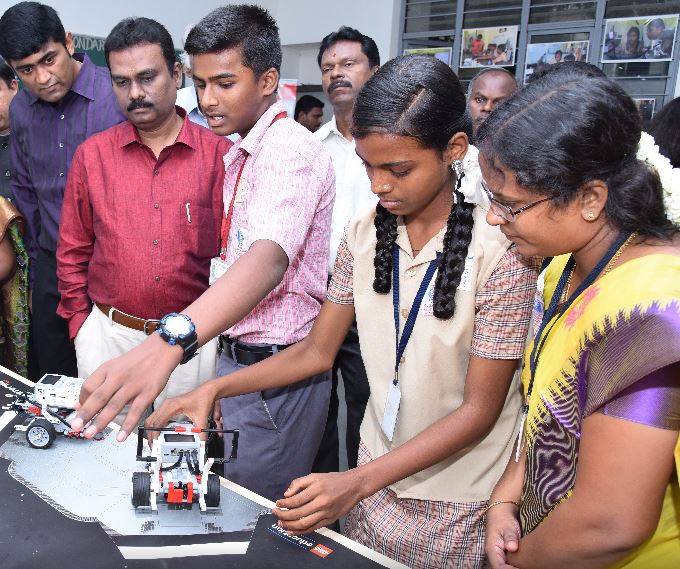 Educational robotics will act as a means of promoting engineering thinking in school children and directing them towards technical creativity. AIF will leverage the existing infrastructure provided by HCL to implement the ‘Robotics Lab Project’ in Madurai. Alongside, Corporation of Madurai will be supporting these schools to improve their interior class room and lab environment by providing the necessary support.

The first robotics lab was set up by AIF’s Digital Equalizer program and Madurai Corporation in January 2019 in Thiru Vi Ka Corporation Higher Secondary School, Madurai. After the success of the first lab, three students V. Heena Shree, R. Dhivakar and M. Sailes participated in the World Robotics Olympiad held in the month of August in Chennai and received appreciation and certificates for their participation.

DE program is a three-year intervention focusing on improving the capacity of the teachers in delivering high quality instruction and ensuring that it impacts each student in the intervening grades. The integrated Robotics project will be totally student centric encouraging learning by doing. The Robotics lab will serve as the incubation center for the corporation school students in developing their creativity and 21st century skills.

AIF’s Digital Equalizer Program utilizes technology to bridge the educational and digital divide in India by transforming under-resourced schools into dynamic places to teach and  learn through collaborative, project-based learning. The Digital Equalizer program has empowered 4 million students, 150,000 teachers, and 13,000 schools in 15 states till now.

The American India Foundation is committed to catalyzing social and economic change in India, and building a lasting bridge between the United States and India through high-impact interventions in education, livelihoods, public health, and leadership development. Working closely with local communities, AIF partners with NGOs to develop and test innovative solutions and with governments to create and scale sustainable impact. Founded in 2001 at the initiative of President Bill Clinton following a suggestion from Indian Prime Minister Vajpayee, AIF has impacted the lives of 5.6 million of India’s poor. AIF has the highest ratings by independent agencies such as Guidestar and Charity Navigator. Learn more at www.AIF.org