The countrywide lockdown and a sudden decision to close schools in March 2020 brought about an unprecedented pause in the education of millions of children in India. A day after the lockdown, seasonal hostels where the children of migrant laborers are accommodated and provided education, were shut down. This put migrant parents in a tough situation as they could not return to their villages and take their children home. Some parents requested relatives to give their children shelter; others sought the help of guardians. But children who had neither relatives nor family members to look after them were left to fend for themselves.

Child as the Head of the Household

Doctaren Khadia’s family has been migrating every year to work at the brick kilns in a neighboring state. In 2019, her parents Luv and Puspa Khadia migrated with their elder three children, leaving behind 15-year-old Doctaren and her younger brother 13-year-old Susanta so that they could continue their education. With the closure of the seasonal hostel, Susanta returned to their home, where Doctaren had to cook, clean, and would later join her younger brother in catching up with their studies. The School Management Committee took note of such cases and facilitated rations through the mid-day meal fund and the Gram Panchayat also provided them with rice, to ensure that children didn’t go hungry. Doctaren’s parents have now returned to their village Magurpani in Nuapada district of Odisha, and after completing quarantine procedures, they are now home with all five children.

Impoverished villagers in Odisha’s migration-prone districts, namely, Balangir, Kalahandi, Nuapada and Bargarh, who toil at brick kilns in the southern states for most part of the year, would take their children along, as there was no one to take care of them in the village or because of the pathuria system. Every year nearly 300,000 people from the area migrate to neighboring states to work in brick kilns.

Under the pathuria system, labor agents advance money for so-called units consisting of a couple and one or two children. The children would flip semi-dried bricks or make balls of mud to be molded. In brick kilns, as one laborer has to prepare 1,000 bricks per day, he arranges bricks in rows with very little gaps in between. Children can walk between rows easily and flip bricks. Some of the children are dropouts and some have never been to school.

Over the past 15 years, the American India Foundation has worked extensively with communities impacted by seasonal migration due to livelihood distress, ensuring access to a continuous quality education for the children of these communities through the Learning and Migration Program (LAMP). Today, close to 200 villages are ‘child migration free’.

In communities more prone to migration, and with low literacy levels, a significant effort is required to convince parents of the importance of education. Many families not only depend on seasonal migration for their livelihoods, but have also lived their whole lives this way, spanning generations in many cases. In order to gain parents’ trust to leave their child in someone else’s care, AIF has created partnerships with local grassroots NGOs that had strong community linkages, and created community awareness to encourage parents that their children would be safe in seasonal hostels. As the parents that took their children with them saw the change in the children that stayed back at hostels – they were healthier, cleaner and had more confidence – more and more parents in subsequent years began to leave their children behind. Migrant labor have found some solace and security in seasonal hostels that educate and nourish their children. 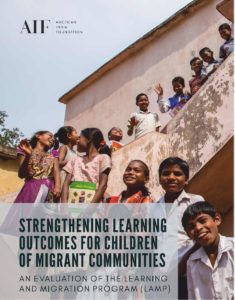 Learning Resources Centers (LRCs) are the latest in the continuous evolution that the LAMP has seen in Odisha. Working on a hub-spoke model covering 200 schools in Nuapada, its principal objective is to improve learning levels, not just in the schools it covers but in the larger education ecosystem by working with government school teachers. An external study presents significantly positive results. Compared to the baseline, the learning levels across mathematics, science and Odiya has improved by a factor of 2.6 to 2.9. As compared to the control schools, the schools that are part of LAMP show significant higher achievement levels. Further, the study also found that students were more ‘school ready’ which meant they were better prepared both technically and socially to deal with a new school and classroom environment. The findings of this study are available in AIF’s latest publication: Strengthening Learning Outcomes for Children of Migrant Communities.

AIF’s Learning and Migration Program has helped build the lives of migrant children like Doctaren and Susanta, who may have been otherwise completely deprived of an education. Since inception, LAMP has impacted close to 584,000 children in 2,279 villages across 13 states of India.

Join AIF in its efforts to rebuild the lives of migrant communities affected by Covid-19. Support the AIF-NDTV Campaign #RebuildingLives  #AIFCovid19Response