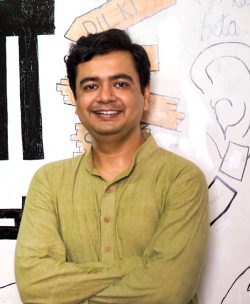 Although he’s a Gujarat native and experienced in community development, joining the AIF Fellowship was an eye-opening experience for Gaurang. During Orientation, he had his first revelation: “When interacting with the other Fellows, I realized that there are a lot of others who have tremendous knowledge and information about what’s happening in India and Gujarat – and very differently from my own experience and understanding!” Gaurang didn’t come to the Fellowship as a newcomer to development. He had already been involved with grassroots organizations and had even started his own youth-based organization the year before becoming an AIF Clinton Fellow. Witnessing the Gujarat riots of 2002 and the growing distrust between Hindus and Muslims, prompted Gaurang to pursue social conflict transformation to foster understanding. However, he had no idea how life-changing joining an international cohort of Fellows would be.

Placed with an NGO only 100 km away from his family home, with his host organization Utthan, he entered seemingly familiar work, namely supporting a livelihoods project with youth. Professionally, Gaurang felt prepared as he had already done this kind of livelihood work during his university days. Culturally, Gaurang felt confident he knew it all as he was in his home state. However, living and working with adivasi (tribal) communities, he found himself learning how to operate and work in a completely different culture within his home state. Gaurang didn’t anticipate the culture shock that awaited him: “I always thought that being placed in Gujarat, I would understand the politics and issues of young people in Gujarat. I thought I already had all the ideas. I was so wrong.” This unraveled the myth that only U.S. Fellows experience culture shock when coming to India as AIF Clinton Fellows. Gaurang finds that, “The Fellowship gave me the opportunity to learn more about my own community, especially the conflict between Muslims and Hindus in Gujarat,” and specifically, how this conflict is defined in a tribal area of his home state. He learned new ways of transforming conflict. “I realized that providing livelihoods could be a great medium to transform conflict between communities,” Gaurang remarks.

His greatest learning experience came from the projects of other Fellows. Gaurang describes the Fellowship cohort as a “living library” of young people: “My co-Fellows, their stories and projects became like a big library for me during those ten months and after. I could pick up any ‘book’ and read about what they’re doing and learning.” Gaining a broader perspective on Hindu-Muslim and other social conflicts from different geographical and thematic contexts, Gaurang says that his own understanding grew exponentially by engaging with his co-Fellows and their projects at strategic points throughout the Fellowship (e.g. thematic conferences). During presentations and discussions at the Midpoint conference, for example, he learned about conflict in the education sector in Jharkhand and in the health sector in Chhattisgarh. He realized that there are “many shades of conflict” across India, in all its local complexities – and that there are a multitude of ways that NGOs address it. During an exposure visit to Delhi, for example, Gaurang observed his co-Fellow Allison in her work with vulnerable youth. Through their exchange, he learned how to use games in youth development to foster critical thinking and to address complex topics like ethnicity and religion – and ultimately included them into his own project in Gujarat. 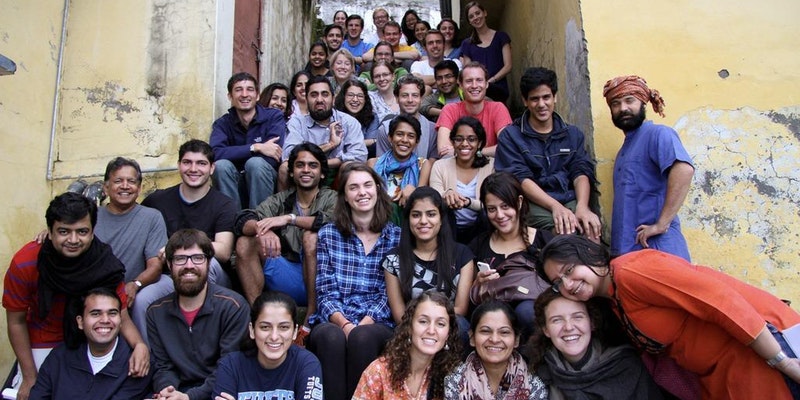 Gaurang (on the far left in the red shirt) with Fellows of the 2014-15 AIF Clinton Fellowship cohort.

Over the phone, Gaurang speaks enthusiastically about how his co-Fellows inspired him, and how it shaped his path afterwards. “I learned that that even in ten months, a small project can have a big impact,” he says when remembering the projects of his co-Fellow Bipin. He was working on maternal health in Jamshedpur, where he conducted a monitoring & evaluation survey about infant deaths in Jharkhand with Tata Steel’s Rural Development Society. “His commitment was so helpful,” Gaurang mentions, “that Bipin was given responsibility over the entire project during Endpoint.”

His experience as AIF Fellow inspired Gaurang to rethink Sauhard’s youth engagement program. He experienced first-hand that the secret to a program’s success lies in its structure: “Before joining as AIF Clinton Fellow, our youth program was largely driven by need. The AIF Fellowship gave me a great idea of how to structure and transform it into a fellowship. For example, design a project, follow guidelines, create a project proposal, implement the project, submit a monthly project summary report, attend thematic conferences, seek regular feedback from your mentor, have a convocation ceremony at the end – this gave me a completely different idea of implementing our program structurally.”

He emulated the structure of the AIF Clinton Fellowship in redesigning Sauhard’s fledgling youth fellowship. The fellowship aims to create a cadre of active citizenship among young people, and to give them the tools to transform conflict. It has since grown into a transformative ten-month fellowship for undergraduate students in Ahmedabad to experience on-the-ground learning in communities different from their own, and to contribute to social development across India. Sauhard selects 40 youth fellows each year. Since 2013, they’ve had over 200 undergraduate students join as fellows in Ahmedabad.

Restructuring the Sauhard Youth Fellowship helped to professionalize and legitimize the program. Gaurang explains to me that the transition from “volunteers” to “fellows” created value for undergraduate students, host organizations, and – equally important – students’ parents. “When you go for a structured program with clear guidelines and a certificate at the end,” Gaurang explains, “parents understand that this has academic value for their kids. They take it as part of the academic journey rather than just spending time with an NGO. The students take it very seriously as they understand the output and value. The letters of recommendation at the end are very important to them. The program helps them to understand social issues outside of the classroom. Host organizations have approached us as they find the concept very interesting.” Gaurang concludes that: “All the impact on the young people, we owe it to the structure!”

As Ashoka Fellow, he is now receiving support to scale up his work with Sauhard, especially the youth fellowship, over the course of three years. Gaurang’s goal: multiply Sauhard’s work in Ahmedabad and take it to the national level. As Gaurang concludes, “The Ashoka Fellowship is also our opportunity to reflect and introspect – to see where we are now and where we want to go.” He’s particularly excited about the great network of peers and experts within and outside of India. Similar to his experience as an AIF Clinton Fellow, Gaurang is looking forward to “not only implementing and multiplying our work, but also taking ideas and inspiration from other Ashoka Fellows worldwide.”

We congratulate him for this achievement and wish him all the best!

Dr. Katja Kurz is Program Officer for AIF's William J. Clinton Fellowship for Service in India, based in New York. She believes in the importance of strong people-to-people ties to support citizen diplomacy. She joined AIF in 2016 and is excited to be part of a team that creates a lasting bridge between India and the U.S. by strengthening the development sector and equipping the next generation of leaders to advance positive social change. She loves working with Fellows and Alumni - their dedication, passion, and resilience never fail to inspire her! Katja's background is in international education, academia and nonprofit management. She earned her Ph.D. in American Studies from the University of Mainz, and her Master’s in English from Clark University. Her doctoral thesis focuses on storytelling in human rights campaigns. Growing up in Germany, she spent most of her adult life in the U.S., with occasional travel to India.