Tucking into the back of an auto rickshaw, cramming between a bus and a cohort of cows, swerving through obstacles, inhaling the aromas of the streets: my morning commute through the streets of Ahmedabad was underway. Peering out the sides of the bright green and yellow auto, I catch some of the faces of the eight million inhabitants, each taking in the chaos of the morning streets with an enviable sense of calmness and routine. As I move with the masses—immersed in the commotion yet separate—I can’t help but compare my present situation to where I found myself exactly one year ago. 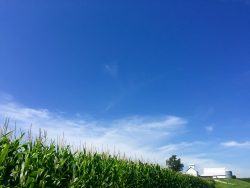 Last year I was a stranger in a different town, Keokuk County, Iowa: a fresh college grad who had signed up to work Hillary Clinton’s Presidential Campaign. I had driven alone for over 1,000 miles from Providence, Rhode Island, not knowing where I would sleep or what I would do. As I pulled up to Delta, Iowa (population 318), I immediately realized that my blue Volvo and I would not blend in with the pack of Ford F-150s that lined the streets. On that first day in Iowa, I was looking for the owner of the only open store in Delta, aptly named Delta Grocery. As I nervously walked up to the front door, I was greeted by a little old lady with an ear-to-ear grin who proudly exclaimed, “You must be the Hillary guy! Come on in, I’ve been waiting for you.”

This was Dixie Shipley: Delta’s sole business owner, over 80 years old, and filled with more enthusiasm and energy towards Hillary than even my own mother (something I thought was nearly impossible). Sitting down with Dixie in her shop was like being in a time machine. Pepsi cans from the late 70s were still for sale; and yellowing newspaper clippings and curling family photos covered the walls, fading with every second. Within moments of starting our conversation, I began spitting out lists of ideas of events Dixie and I could do in Delta to get Dixie’s community organized for the Hillary campaign. As I rambled, I saw Dixie’s enthusiasm slide off her face. She looked at me, with loving concern in her eyes, and said, “You’re going to need do a lot more listening, and a lot less talking, if you want to get the people of Delta to do anything for you young man.” Her bluntness caught me off guard. “Get them to do anything for me,” I thought, the words ringing in my head. I didn’t know what to say. As I left the store and opened my car door, I realized I had messed up. I had come into Dixie’s home, her community, and told her what should be done. I felt like a New England carpetbagger, coming into a community with ideas about how to change a place he knows nothing about; and I hated it.

I learned in that first meeting how important it was going to be to start listening, because it was only when I began to learn about the problems of these individuals that I could be an effective organizer. So over the next six months I traveled all over Keokuk County, listening. I was a stranger, with no roots in the communities of Sigourney and What Cheer —my only hope was to sit at hundreds of kitchen tables and dinner booths and ask people why this election mattered to them. I didn’t know the struggles of Keota High School until I sat down with three of its students. I didn’t know what it was like to live check-to-check on social security benefits until I met with Dennis every week over a cup of coffee. And over time, as I learned about peoples’ lives, suddenly hidden Hillary-supporters started popping up all around the county, and my volunteer base began growing faster than I could’ve imagine in those first few difficult weeks.

These experiences taught me a simple formula: humility plus immersion yields knowledge and understanding, that in turn builds relationships, which allows for and fosters communication. A year later, as I begin work on a human rights project for the Human Development Research Centre, I find myself similarly lost as I weave through the alleys of the slums of Ahmedabad. Sitting and listening to the slum women of Ahmedabad, I realize how I must once again abide by Dixie’s sage advice. I may be 8,000 miles away, but her words still ring true as I confront a whole new set of barriers. 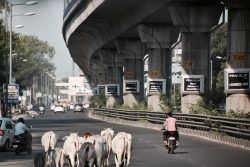 Something that has come to represent my travels in India is the novel Shantaram by Gregory David Roberts. I have purchased this book no less than three times while in India, and I know anecdotally that many other travelers to the subcontinent do the same. In short, it is the romantic story of a white man moving to Bombay, learning the pulse of a foreign city, and his various ensuing adventures as he learns more of the culture and peoples of India. Although I’ve yet to finish Roberts’s novel, one part of it repeatedly captures my attention. When Roberts’s main character first arrives in Bombay, he boards a bus from the airport into the city. Staring out the bus windows, he is transfixed by the faces, the street scenes and the slums. He observes:

“The bus stopped in a stutter of traffic, and a man emerged from one of the huts near my window. He was a foreigner, as pale-skinned as any of the new arrivals on the bus, and dressed only in a wrap-around sheet of hibiscus patterned cotton. He stretched, yawned, and scratched unselfconsciously at his naked belly…I found myself envying that contentment, and the smile of greeting he drew from a group of people who walked past him to the road…Seeing him there, a man as alien to the place as I was, let me picture myself in that world. What had seemed unimaginably strange and remote from my experience suddenly became possible, and comprehensible…” [1]

Like the bus passenger in Shantaram, and like my former self when I first arrived in Iowa, I now struggle to integrate and understand better the complexities of India. As I think of my projects in the slums of Ahmedabad, it is my strongest desire to believe in the possibility of what Roberts’s protagonist sees: an outsider who became unremarkable and commonplace. To, through the grace of time, integrate into a community until you yourself are “local.” Indeed, as I stare out the side of my auto rickshaw into the streets of Ahmedabad, I realize how uncomfortably foreign I am. As I walk into the Human Development Research Centre at St. Xavier’s College, smiling to my new coworkers, I can’t help but feel the painful reality that I will be eating lunch alone. And, most importantly, as I go to work in the slums, I realize that the shorts and baseball cap I wear serve as simple reminders of how much more listening, learning and waiting I need to do. I am still an outsider; but with time, some tough hours of Gujarati classes, and each conversation I have with the people of the larger slum community, I get closer to becoming an unassuming part of my new home. 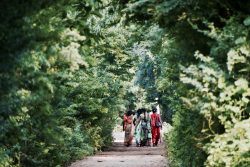 It is strange how 8,000 miles and over a year can bring you to almost the exact same place. A year ago I was a foreigner in Iowa, and now I hold much the same position in Ahmedabad. Once again, I desire to remove the aura of “outsider” that surrounds me—hindering my ability to truly work with a community. The fact that I successfully made this transition once before gives me the confidence to forge forward yet again. I will never forget my final night in Iowa, crying as I said goodbye to the community that took me in and taught me about humility and patience. I can only hope that in a year, as I pack my bags, my eyes will swell again as I say goodbye to my new home and family. But in order to arrive at this final farewell, painfully boarding my flight to JFK Airport, I know what I must do—and it starts with a conversation over chai.

Dylan is incredibly excited to be joining St. Xavier's Human Development and Research Center this year to work on issues ranging from women's rights to education. He is looking forward to becoming part of a new community, enjoying the wide variety of street foods and exploring his new home of Ahmedabad. While at Middlebury College Dylan majored in History, writing his junior thesis on British Colonialism and his senior thesis on Theodore Roosevelt and race relations during his presidency. After graduating Dylan worked on the Hillary Clinton campaign in Iowa, Florida and Virginia. He is excited to continue fighting for causes he believes in, this time across the ocean!

8 thoughts on “Iowa to India”