On the first morning of the “Gender, Livelihoods, and Environment” Thematic Conference, nine AIF Fellows settled in the meeting hall at Jagori Grameen. Wrapped in jackets and scarves, we sat on long floor cushions and breathed in chilled mountain air. We were eager to learn about grassroots community organizing and the fight for gender equality—to jump into Jagori’s groundbreaking feminist work.

But first, a song. Jagori’s founder Abha Bhaiya introduced us to the space and invited some staff members to sing. It was a warm welcome, a blessing for the days to come, a call to action:

“If you are alive, believe that you will win this battle of life / If there is heaven in this world, go and bring it down to earth.”

Bringing heaven down to earth

Tucked in the hills of Dharamsala, Himachal Pradesh, Jagori Rural Charitable Trust really does feel like heaven on earth. Our home for the Thematic Conference was their Training and Research Academy (TARA), a picturesque and eco-friendly feminist retreat campus. Nurtured by organic farmland, clean air, and the ever-present Himalayan foothills, it was the perfect place to delve wholeheartedly into their work.

Since 2003, the NGO has tackled social issues through a feminist lens. Their work is quietly radical: engaging with people of all backgrounds on multiple social levels, confronting gender issues through community outreach and education. Staff members work directly with underserved groups like rural, uneducated women and adolescents. Their reach spans genders, ages, religions, castes, sexual orientations, and educational levels. Their activism extends much deeper into the local community than expected. The organization fights for a “just and equal society for all” through feminist-informed community outreach, engaging everyone in the community (including men and boys) to develop solutions for systemic social problems while empowering women and girls.

Their work unfolds in and around Kangra District, Himachal Pradesh. Within these programs, the organization supports women’s health educators, conducts community women’s courts, and provides gender sensitivity trainings across India.

“The feminist movement has always challenged what is not right.” – Abha Bhaiya

Jagori’s leader Abha Bhaiya has been active in women’s rights movements since the 1970s. She was one of the founding members of Delhi-based Jagori (a women’s rights and resources collective) in 1984 and went on to establish Jagori Grameen in Himachal Pradesh in 2003. Her work is deeply influenced by the lived experiences of underserved women—in particular, rural and unmarried women. Accordingly, Jagori Grameen’s programs invest in and advocate for these women’s leadership potential from adolescence onward. Abha has also contributed a great body of thought on feminist training methodologies, with an emphasis on linking grassroots and national/international feminist practices and advocacy. (Read some of Abha’s thoughts on her journey to Jagori here.)

During the three days we stayed on Jagori’s TARA campus, we had the opportunity to engage with staff and community members in the field. In doing so, we experienced the ways in which the “feminine consciousness” described by Abha was actively disseminated through community outreach and education.

Defining a “brand of feminism”

Through meetings with community leaders in the field, discussions over organic dinners at TARA, and WhatsApp conversations after the trip, we weaved together an understanding of Jagori’s unique feminist approach. From Day One, Drew reminded us of the underlying organizational theme of “internalizing the feminist focus often part of external programs.” He used this theme to try to understand “the connection between Abha Bhaiya’s involvement in feminist movements (huge scale and not just in one location) and farmer empowerment (local grassroots).”

In addition, Abha’s “broad activist approach for empowering women and acting on it in villages/districts she was not from” was interesting to Lina. She saw this novel approach to activism represented during our field visits, in which she was surprised by the range of ages present. “Several of the groups we met with involved older women and men, and I had expected this to be youth-focused,” she said. “It reminded me that people of all ages can contribute and create change, and set examples for their families.”

Asra was also impressed by their approach, as the notion of feminism “generally draws in [her] mind a picture of women ‘fighting’ for their rights, protests, marches, etc.” She was curious to see how gender activism could be implemented among rural, uneducated women. Surprisingly, “it turned out that just informing them of their rights and helping them identify their rightful place in society is all that’s needed… There were no marches involved, but just a bunch of women telling a bunch of other women the difference between right and wrong!”

Deepika observed that the women leading this charge were the source of the organization’s unique brand of feminism. “Seeing so many strong women as part of the team leading in their respective roles was inspiring,” she said. “I saw women who were facilitating, leading women’s courts, facing eve-teasers, coming out of their own difficult family situations, and being role models for other women in the village.” 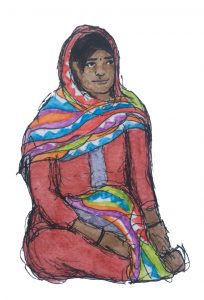 In leading by example, these women are inspiring others to reshape society. Subha noted that tangible change seemed to result from “events where strong women were paving the way for other women to follow, simply by taking leadership roles.” She said, “This form of feminism was definitely more application-based than advocacy-based—there was less protesting and more ‘I’ll do it myself’.” This may lead to “a lot more girls that aspire to political office now than there were before.” She also noted that “every woman has her own brand of feminism that developed through her life experiences” and was eager to learn more about Abha’s personal feminist influences.

Our experience with Jagori led to thoughts on “how we can take some of our learnings and utilize them in our own work,” according to Parijat. He reiterated the way that Jagori prioritizes an “internal feminist focus as well as an external focus” within the organization and outward into the community. He was interested to see how his own organization’s upcoming visit to Jagori would affect their team. NGOs, nonprofits, and other organizations can attend gender sensitivity trainings run by Jagori across India; they can also go to the TARA campus in Dharamsala or arrange to have Jagori members come to them.

It was clear that our visit to Jagori would have lasting effects on our understanding of women’s empowerment in India. Michael summed up his experience as “inspiring”:

“Jagori felt decades ahead of other organizations dedicated to women’s empowerment. Many organizations only empower isolated sections of women’s lives while ignoring or being complicit in other ways women are oppressed. So at times, the barriers to women’s empowerment in rural India seem daunting. Jagori reminded me of what is possible. They were unafraid to tackle issues taboo even in the West. A gay pride flag adorned their dining room; Jagori works to expand access to abortion; their sex education programs were detailed and extensive.

Simultaneously, as comparatively radical as Jagori’s feminism was, it never felt unnatural or forced on the communities it worked in. Detractors of feminist endeavors in development often malign feminism as a Western import incompatible with India. They’ll even construct false hierarchies of needs to argue that no organization can fight for the LGBT community while purdah [the practice of female seclusion] persists. These naysayers would argue that Jagori should take smaller, less-intersectional bites because rural Himachal allegedly could not chew a feminism that is both environmental and anti-caste. Jagori’s work proves these naysayers wrong. Jagori’s feminism is boldly intersectional and wildly successful.

At the risk of mixing metaphors, Jagori runs while blowing bubbles. They resoundingly repudiate the notion that communities must progress with piecemeal reforms lest they choke on allegedly ‘Western’ ideas that a teenage girl should be able to discuss her periods openly with her father. Skeptics argue that baby steps protect communities from tripping over Ambedkar’s radical beliefs that the dalit woman farmer’s electoral reservations must be accompanied by market to which to sell their goods. Jagori proves the skeptics wrong”

My biggest inspiration was Jagori’s commitment to action based on active listening: to marginalized communities, to our nurturing earth, and to each other. This amplifies unheard voices and fosters a sense of collective belonging. I am deeply motivated by this movement founded on and driven by progressive community education and compassion for one’s neighbors.

As we listen, think, and take action throughout the remainder of our Fellowship, we will carry forward Jagori’s mission in our own work—moving closer toward the vision of “heaven on earth” that we know is within reach.

To learn more about Jagori Grameen, visit their website: jagorigrameen.org.

All images sketched by the author during the AIF Fellowship “Gender, Livelihoods, and Environment” Thematic Conference at Jagori Grameen in Dharamsala, Himachal Pradesh, 19-21 January 2018.

Priya is a librarian and artist passionate about connecting people with life-changing knowledge, resources, and experiences. She has a master's degree in library and information science, and has worked in public and academic libraries, archives, and arts institutions. As an undergraduate, she spent a semester in Hyderabad studying Indian literature and culture. Her graduate research includes rural Indian libraries, Indo-Caribbean library systems, digital libraries, and services to underrepresented communities. Prior to the AIF Clinton Fellowship, Priya worked as a reference librarian at the Boston Public Library and as a library and archives assistant at Harvard University. She also volunteered as a youth mentor and has played in a variety of world music ensembles. In her free time she enjoys running, cycling, book and paper arts, and exploring her community through food and music. Priya is motivated by the belief that everyone can benefit from community-driven education and public programming, from the neighborhood to the national level. She is excited to join Youth4Jobs in their newest venture and connect young artists of all abilities to allies and employment.

One thought on “Jagori Grameen: Feminist Approaches to Community Impact”