I find it fitting that at the same time that I have been struggling to move my personal blog away from its focus on travel and towards work, I made an interesting NGO/development related discovery while traveling last weekend.

My roommate, a co-worker, Menaka (one of the other AIF fellows), and I had been wanting to visit Hampi for a while. Hampi is a famous World Heritage Site 8 hours from Bangalore that is known for its temples that date back to the 13th to 15th centuries. We took a day off of work to make a long weekend of the trip and rented a car so that we could experience a road trip in India and have more freedom to explore. 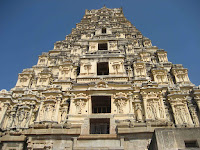 At one time, Hampi was the center of the Vijayanagara Empire, which was defeated by the Moguls, thus leaving its temples in ruins. The village’s main attraction is two large, pyramid-shaped temples. Nearby the temples there is a small market, which caters to tourists, while at the same time seeming relatively untouched. The entire area is surrounded by large, tan and clay colored boulders, and scattered among these boulders are the dozens of temples.

It’s incredible, because you can walk around for hours admiring 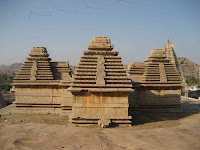 the remains of the structures and the natural beauty, and never see another person. On the one hand it seems strange that the area isn’t under careful protection, but at the same time it makes it so special to be able to experience it without guards yelling and fences holding you back.

The second day in Hampi, Menaka and I rented bikes and did a tour of the surrounding area on wheels. In total we probably cycled about 15 to 20 miles, and it felt wonderful. Well, the sore ass didn’t feel great, but being active and in such an amazing setting did. 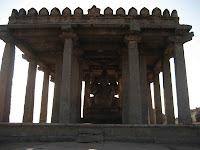 On our bike ride, we took a loop that went through most of the temples. When we would ride past something interesting, we would park our bikes and spend some time walking around, imagining what it must have been like to live there more than 600 years ago.

After a while we made our way to the river that runs by Hampi, and decide to lock up our bikes and take a boat ride across. There is a craft village on the other side of the river that is referenced in some of the guidebooks, and was also recommended to me by Mr. Ghosh (my boss at Ujjvan).

The boat ride is definitely worth describing. The boat was essentially a circular structure about 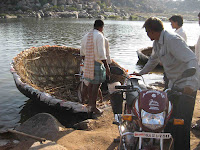 10 or 12 feet across that was made of woven bamboo, a tarp, and a coat of tar. I’m not talking about a thickly woven layer of bamboo. It was more like a loosely put together tangle, that you could see the tarp through. This alone was enough to make me skeptical. Now, imagine that my boat ride across was shared with three motorcycles and ten people, half of whom had large bundles of wood and other farming supplies. Despite all of this, we made it across just fine.

When we finally made it to the other side, one of the first things we noticed was that there really was nothing to see—or at least not at first site. We were famished from the long bike ride, so our first objective was to find somewhere to eat. We searched around what seemed like the entire town, and came up empty. Not a single restaurant in site. Menaka’s guidebook mentioned that the NGO that organized the artisans, which is called The Kishkinda Trust, served food, so we started asking around for it.

Almost everyone knew where the Kishkinda Trust was located, so we found it pretty quickly. When we walked into the building, there was a young lady working on something with string and beads, and another woman behind a desk working on a computer. When she got off the phone and looked up at as, we awkwardly asked “Umm. Do you have any food.” She seemed un-phased by our odd request, and replied, “Well, I’m sure I can find you something. You came all the way here and I can’t have you leave hungry.” (We later realized that we had stumbled into the NGO and not the restaurant that it started, which is why our request must have been particularly odd).

The woman’s name was Shama Pawar. She asked us what made us come to her NGO, and we said we read about it in the guidebook and my boss had recommended it. She put aside her things, and told us to follow her to her car. We made the quick drive to her home (which was really a quite, and peaceful sanctuary) and she let us into a room to wash up. She proceeded to share her personal lunch with us. I found this gesture incredibly kind. She had never met us and didn’t know anything about us, and yet she shared her meal for one person, with two others, to ensure that none of us would be hungry.

Over lunch she told us all about her NGO, and the holistic approach they are taking to tackling the poverty and stagnant economy in the small village. She moved to the village 12 years ago, and started training local women on how to weave various things out of banana leaf string. They make things like bags, placemats, wall hangings, baskets, etc. The craft slowly gained popularity, and today there are over 200 women who are involved. They sell their goods at a small store that they opened in town, which is popular among tourists.

But Shama didn’t stop with training some local women on a new craft. She believes in addressing the many aspects that are confining and limiting the village’s potential, and doing so in a sustainable way. Over the last 12 years, the NGO has introduced a learning center, library, waste removal system (seemingly unheard of in India), a hostel for visitors, a restaurant, etc. etc. etc.

Shama talked about everything so casually, as if it was no big deal what she had accomplished. Having learned all of this shed new light on my walk around the village earlier that day. I thought back about how the streets were clear of trash and the cars were organized. Most people we passed were working and not idling around.

After we finished eating, Shama arranged for us to have a tour of the village and the many projects underway. The man who runs the hotel took us around and gave us a chance to talk with many of the people employed as an outcome of the NGO. What struck me was that although these people were by no means wealthy (maybe just barely in the lower middle class), their jobs were not manual labour, extremely arduous, and personally diminishing. They had achieved a quality of life that was higher than most other people in a similar income bracket in India.

This was in fact, one of the goals Shama had told us she had for the NGO. She spoke to us about the enormity of problems in India (pollution, traffic, disease, over-crowding, etc.), and how she thought not only that it was senseless for these issues to exist, but terrible for people to accept them as part of life. It wasn’t enough for her to just try to solve the village’s problems. She wanted to do so in a way that was environmentally friendly, empowered the population, and did all of these things for the long term.

This concept reminded me a lot of an idea developed by Jeffrey Sachs’, the famous economist who wrote “The End of Poverty.” He discuses the concept of “Millennium Villages,” which are essentially village led development programs, which seek to solve a myriad of problems (health, agriculture, poverty, water, etc.) all within a single village. Sachs believes that this can be a very successful model for over coming poverty. It’s basically a micro approach to solving nation-wide problems.

When I first read about this concept it seemed very idealistic. My immediate thoughts went to all of the challenges involved in making a Millennium Village successful: getting the money in the right hands, choosing a village with the right geography, the lack of infrastructure within poor villages, getting educated people to work to bring about the change, etc.

However, when I saw a Millennium Village in action, which is essentially what The Kishkinda Trust had created, I became much less skeptical of Sachs’ idea. I think that what helped Shama to achieve so much, was largely her charismatic personality. She really seemed to command the respect of the villagers. This allowed her to be more effective and efficient. She also had the support (monetary and political) of the government. I found the village and its partnership with the NGO to be a good example of how a local government that is run well can really work to improve the lives of its citizens.

Shama and her NGO reminded me of stories that I’ve heard about Brian and Maria’s (two other fellows) mentor in West Bengal. Their mentor is also a very strong, well-respected leader in the community, who is systematically bringing about change in a variety of ways. Brian and Maria seem to be having one of the most amazing experiences, both personally and professionally. In this light, I will be recommending to AIF to pursue a relationship with The Kishkinda Trust, in hopes that future Service Corps fellows can contribute and learn from the amazing programs in this small village outside of Hampi.

***Note*** The Positive impacts of the NGO even extend to the local monkey population, which seemed to be much more friendly than in other areas of India. 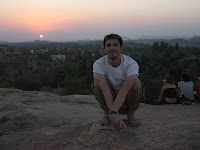 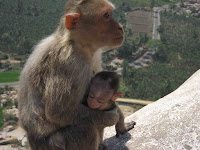