My placement at Dream A Dream in Bangalore provides social emotional learning opportunities for children from vulnerable backgrounds through afterschool programs, outdoor camps, and “fundays” which engage private sector organizations who seek to work with young people in their corporate social responsibility initiatives.

I have been performing regular observations of the afterschool sessions in some of the vulnerable neighborhoods here in Bangalore to get a feel for how they work. I have been mostly observing fifth grade students and their eyes light up when I try to sneak in the room. I really can’t “observe” the afterschool sessions because I cause such a disturbance. Sometimes they just ignore the afterschool facilitator to talk to me and swarm me after I shake a kid’s hand. But I feel comfortable working in a classroom as a proud 2011-2012 alumni of City Year, an AmeriCorps program that sends young adults aged 18-24 for a year of service in some of the most underserved and vulnerable urban areas in the United States.

At an elementary school in southern Bangalore, I attempted to observe a new facilitator, and walked in as she began the lesson. We had an ill student, so the facilitator took her to the school office to notify her parents. I was left in a room with about 20 students who all wanted to ask me a million questions. I stood up and said, “Do you speak English?” assuming that they didn’t very well because the afterschool lesson was being taught in Kannada, the local language of Bangalore. But their eyes grew wide, their smiles grew and they all yelled, “Yes!”

They kept swarming with me questions “Where are you from, sir?” “How old are you, sir?” “Do you have a girlfriend, sir?” This all happened over the course of ten seconds. Knowing that they were getting out of control, I took charge by saying “You can ask me a question if you sit quietly, raise your hand, and wait for me to call on you. Please begin the question by saying your name.” They were so anxious to learn about me that all of them sat there quietly, but bursting with excitement. I told them I was from “America” and that I was turning 27 soon, and that I did have a girlfriend. But I asked them a few questions and learned some of their names.  I think I did get a question about John Cena, which is a common thing when I work with children of that age group.

They got a little out of hand when the facilitator returned, and I told them as it spiraled out of control that if they behaved, we could get our picture taken together. They began to quiet down with some additional insistence by the facilitator and she performed a lesson on storytelling. A few students were allowed to use the chalkboard draw pictures to accompany their own stories, As some students were up front telling their story, I got the occasional stare and smile. I couldn’t understand the stories the children told because they were in Kannada, but a girl used the chalkboard to draw palm trees, a beach, and some stick figures walking on the sand.

After the lesson ended, they swarmed me with more questions such as “How far is it to America, sir?” and they were so friendly and genuinely curious, I felt like I had to get a picture to remember them. I got them together and one of the Dream A Dream staff members took our picture. As I got on the motorbike to leave, they waved and said “Bye Jared!” They were great kids, and I can’t wait to get out of the office again and see them!

Here is the picture I promised them. 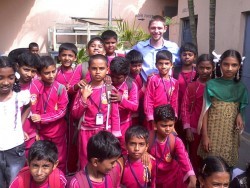 Jared is from Bedford, Indiana, which claim-to-fame is the "Limestone Capital of the

World." He graduated with honors from Indiana University in 2009 with a degree in political science, specializing in intrastate conflicts in the Middle East and Central Asia. After graduating, he worked with the U.S. Department of Homeland Security as a Management and Program Analyst working on national security policy analysis. A year later, he resigned to earn an officer commission with the United States Marine Corps, however his military career was cut short due to injury and illness at Officer Candidates School in January 2011. Eager to still serve, Jared became an AmeriCorps member with City Year Washington, DC where he served for ten months in an inner-city middle school. In his eighth grade classroom he assisted in the implementation of an innovative self-directed e-learning initiative in partnership with Johns Hopkins University's Center for Gifted Youth. Jared's service career then took him to Lusaka, Zambia in sub-Saharan Africa as a Global Health Corps fellow with an NGO that provides support to refugees fleeing political violence from the Democratic Republic of the Congo. In addition to his passion for service, Jared is also passionate about food and is eager to immerse himself in India through trying as many different meals as he can. Supported by American Express

One thought on “Learning the Ropes at Dream A Dream”