After working in the social sector for a short two-or-so years, I have come to cringe at the word “development.” Ironic, you may think, no? That’s the very word that has branded this field for so long. But I have found it to be one of the most detrimental names to give a sector that strives to achieve equality, and to an extent, some level of uniformity. In using the word “development,” I have found that often times, pre-existing traditions and cultures gets ebbed away at. It is the age-old struggle that we in the social sector face: How do we work towards social, economic, and political progression while still preserving the precious but rapidly depleting traditions and cultures?

In an effort to try and find some answers, I did some exploring. Seeing as the question I earlier posed is the question in the social sector, I by no means went out expecting a clear-cut answer. I, instead, took the “learn” portion of this Fellowship’s motto (#ServeLearnLead) to heart by filling up my weekends for the past month connecting with India’s ancient culture in the way I knew best – for the past several years, two of my passions have included pottery and painting. So, I took to learning a few of the oldest and most traditional forms of art in India. I was so impressed and learned quite a bit about how some organisations have linked preservation of these cultural ties to effectively economically empowering local artisans by giving them fair platforms to sell products and teach their authentic styles. Not only did I learn about creating conscious and considerate business models, but I also had a very educational experience as an artist learning these new styles, some of which date back to as early as the 10th century AD.

Here are three of the products that I was able to make while learning:

Have you ever seen a beautiful sari with designs printed on it? Or perhaps a blanket or sheet? Ever wonder how those designs got there? Yep, you guessed it – block printing. Block printing is estimated to have originated in the 12th century and has been developed in Rajasthan, though it originated in China (History of Block Printing In India).

Since the process of creating the dyes and mud is quite intricate, we got the abridged version, though you can read more about the thorough process here. In our session, we were taught by a local Rajasthani artist who came to Mumbai to teach us block printing, which is also his family business. All of the material that we used were natural and organic; we used cotton cloth, natural dyes, mud, and the block prints. First we marked our pieces of cloth with our choice of block print using the mud. Then we let the prints dry by sprinkling some sand on the parts with mud on it. We let the designs dry for about 2 hours before dyeing the cloths with either red or blue, though as you can see, I used both. The process was relatively simple, though it required very careful and meticulous placement of the blocks. As you can see, mine was a little less than precise – whoops. 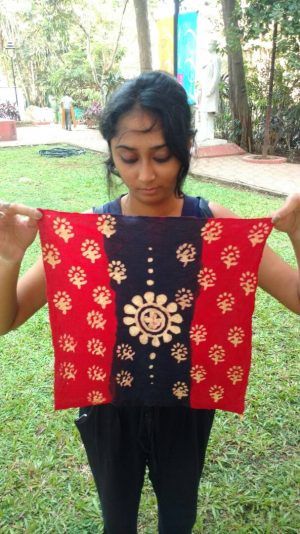 The gonds are the largest Adivasi group in India and their roots can be traced to the pre-Aryan era (Gond Art, Deccan Footprints). Traditionally, Gonds paint on walls, though the art has been adapted to incorporate modern mediums, like canvas, acrylic paints, drawings, ink, and more (Ibid). According to Gond beliefs, everything is spiritual, and therefore sacred (Gond Art, Utsavpedia). Painting these objects, then, was seen as a form of reverence and as a means to depict the strong connect that humankind has to natural surroundings. Gond painting, therefore, often features nature, traditional songs, oral histories mythological stories, or everyday tasks. The paintings are usually bright with color and are incredibly intricate with the lines, dots or circles adorning almost every part of the painting. The art form is now indigenous to Madhya Pradesh, though it is common in Andhra Pradesh, Maharashtra, Chhatisgarh, and Odisha as well. Because of its predominance, the Government of India is actively working to preserve the artform (Ibid).

When we were learning, we used pen, canvas bags, and acrylic paints. Everything we did was free-hand – no external forms of measurement were allowed. We started out with exercises to familiarise ourselves with the style. We allowed our hands and eyes to adjust to the steadiness required while creating the small lines, loops, and dashes. We then got to choose our designs from a myriad of examples that were given to us. I chose to combine two – one that only featured a black and white tree, and another one splayed with colour that depicted a man and woman tied into the trunk of the tree. It took about 2 hours to complete the entire painting, including sketching the design in pencil first. After I finished, I realised that the design reminded me both of Radha Krishna and of Adam and Eve. See if you can catch the references to the two couples that I added! 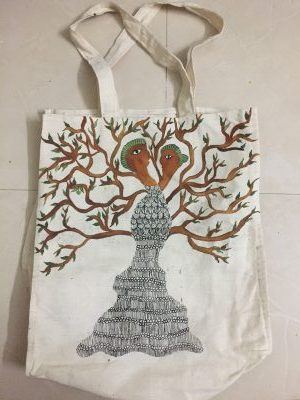 Warli art doesn’t have exact records of its origins, though it is thought to have existed as early as the 10th century AD (History of Warli Art). Now, the art is local to Maharashtra and can be found throughout the state. The style of the art is very simple, with the shapes limited to lines, circles, triangles, and squares. It is said that the shapes came from the observations from nature. The circles were meant to emulate the shape of the sun and moon, while the triangle came from the mountains and trees (Ibid). The art was created and practiced by tribal women on walls, and unlike many tribal art forms, it did not feature mythology, instead, it depicted people carrying out everyday tasks (Ibid).

This art form was largely self-taught. After I made my pottery piece several weeks earlier, I thought that as a great self-made souvenir of living in Maharashtra, I could decorate my piece with Warli art. The jar is a coil pot, or a pot that was created by stacking coils of clay one on top of the other and then blending them together. It was fired once to give it the pink look. I used black and orange slip to create the Warli art, and then covered it in a clear glaze.

So, after exploring a bit into India’s ancient world, here’s what I learned:

It’s hard to think, after studying these various art forms, that so often, areas of the world that are saturated and rich with these traditions are marked as regions of “development.” After attending these various lessons and learning about the art forms, I have realized that it is up to us as professionals in this field, to incorporate traditions and culture as much as we can into the business models that we create to mould the social sector.

To me, the techniques, resourcefulness, eco-friendliness, and purposefulness that the people of these regions portray through their arts are not only extremely advanced, but also incredibly informative. Not to mention beautiful.

Although being an Indian-American, Nisha has never been to India like her parents did and now is excited to integrate into the Indian culture and make it a strong part of her identity. She is passionate about health and education and is looking forward to working in the same field through AIF and her host organization. Through this fellowship, she wants to learn about the issues from the people who are living through them and wants to gain a deep understanding of them. Prior to AIF, she was living and working in Peru and Tanzania, an experience she things that would help her in this fellowship.

One thought on “Let There Be Art”