It’s taboo. It’s never discussed. Whenever you say the “s” word, the older girls will start to giggle and whisper amongst themselves. The bewildered look on the younger girls faces and the awkward silence of the adults in the room is telling of how uncomfortable the energy has turned.

In my point of view, one of the most important life skills the youth should have, is knowledge about Sexual Reproductive Health (SRH), yet it’s the least talked about in the community. “In India, adolescents have a striking lack of knowledge, agency, self-efficacy, and decision-making power- all critical measures of empowerment- that impact their sexual and reproductive health” (Body of Knowledge, p. 19). The way I look at sexual reproductive health in the development sector, it should be encompassing of all things biological, emotional, social, and mental aspects of an individual’s health and ability to reproduce, AND his/her freedom to make decisions relating to protection and safety if s/he chooses to have sex. Ideally, SRH talks doesn’t just involve talking biological processes, the “birds and the bees”, and how to put on a condom, but also includes topics like learning about gender and gender roles, and the role it plays in dynamics of power. In my nine months in this country, I am understanding how much a role the conservative nature of this host culture is playing in why these topics aren’t discussed very openly. 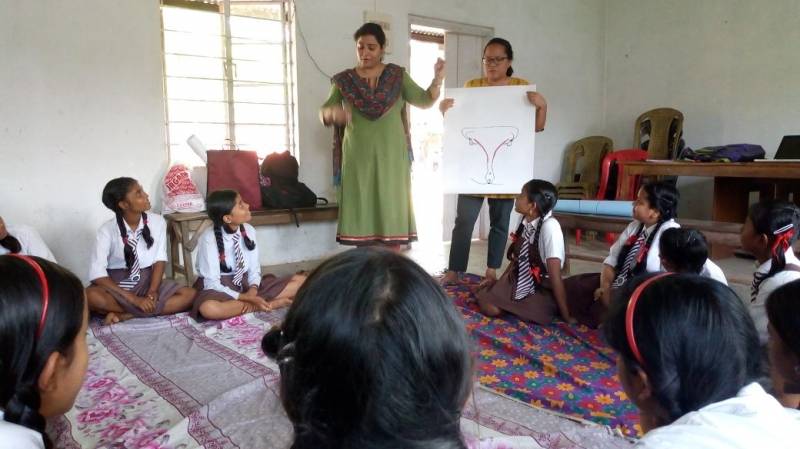 It’s been my experience in doing development work, that teenage pregnancy or high rates of HIV/AIDS is identified as the number one problem affecting the youth; yet in the schools, there is limited information or overwhelming stigmas surrounding talking about sex. I could go on for days about how frustrating this is, even in America we still have these issues, but I wanted to highlight how attitudes about this topic, affects my own project.

When I did the survey for my project back in October, there was a section that asked the respondents about their knowledge of sexual reproductive health topics. The interns conducting the survey mentioned this was the hardest section for them to fill out. Doing my data analysis I found that in the community I’m working in, 80% of girls interviewed that attend school, were not aware of the protection measures during sexual intercourse. In addition, of the 58 girls that took a pre-test (before implementation of the life-skills program) 33 responded that they had a complete lack of knowledge about the difference between gender and sex, and 31 respondents could not name two different methods to prevent unwanted pregnancy. Furthermore, only 15 girls were confident in their abilities to name three emotional/physical changes associated with puberty. This is just part of the reason why I pushed so hard to have SRH modules in the life-skills program.

In planning my project modules, I set aside three lessons, Puberty/Menstruation, SRH I and SRH II, but I knew on its own there’s enough information to for these topics to make up a whole program. I knew it would be the “hardest” topics because of how uncomfortable it is not just for the kids but for the adult facilitators, to engage in. However, it’s because of this unease in addressing it, that makes it crucial for the youth to get accurate and factual education on.

The implementation of the sessions was not perfect, but at least the information was given and it was left open for the girls to ask questions.  It was hard to follow my lesson plans because of the lack of materials available and of limited facilitator training of delivering these modules. Instead we had to rely on videos made in Hindi. That was unfortunate because the material wasn’t translated into their first language (Assamese). Second, I personally would have liked to go deeper into the topics of gender vs sex, and more on the real ways girls can protect themselves against unwanted pregnancy. However again with the language barrier it would be hard to for me to convey and get an accurate translation of the message in the way it should be delivered. The sessions were a bit uncomfortable, but that’s okay. It will take a while to change attitudes and eliminate stigmas, but we need to start somewhere, and that is being okay with talking about sex and sexual reproductive health.

Born and raised in Honolulu, Hawaii, Janelle is a licensed social worker with a specialty of developing children and families. After receiving her Masters in Social Work from the University of Hawaii at Manoa, she joined the United States Peace Corps as a Youth in Development Volunteer, and was placed in the rural Phayao province of Thailand. Her proudest accomplishment during her service, was running a girls empowerment program that included participants from all over the Northern region of Thailand. Previous work experience include working for the Hawaii State Legislature as a Legislative Aide, Special Activities Coordinator for Gaining Early Awareness and Readiness for Undergraduate Programs (GEAR UP), and a Education Paraprofessional in Hawaii public schools. Janelle has a breadth of experiences abroad, including a semester in London, England, and completing an intensive practicum in Baguio, Philippines. She has a strong interest in empowering the youth and hopes the to apply her skills to help the youth of India.