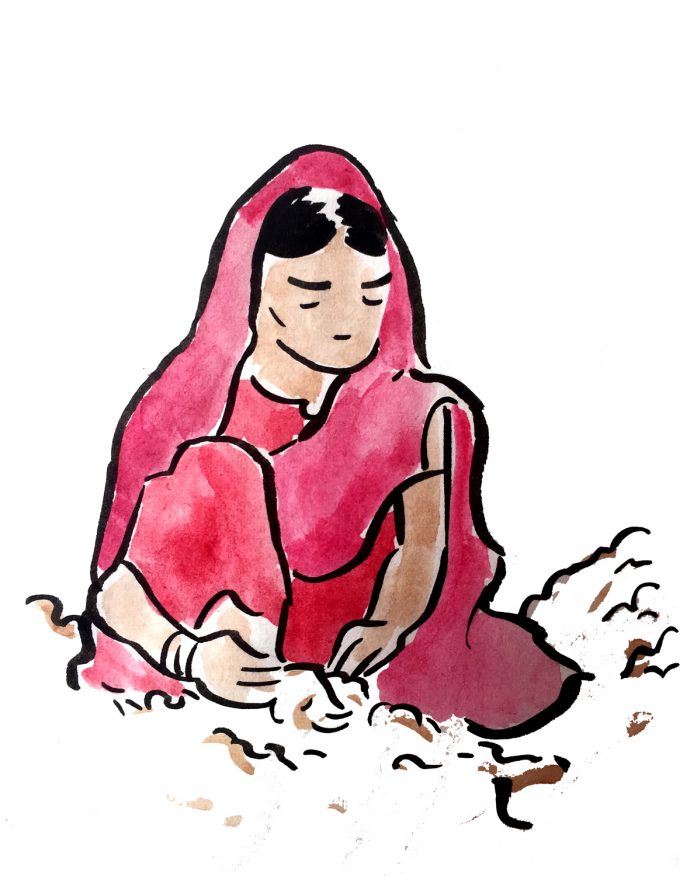 When I was young, I learned that the Mona Lisa took decades to finish. I admired the classic artistry and meticulous craft. In that moment, I felt that humanity had moved well past the age of beautiful production and that humanity only valued timely industrial production. “Who works on a piece of art that long anymore!?” I thought. I was naive, but I still carry that bitter critic on my shoulder. The process of hand-woven, artisan designed wool rugs let me see how industry bridges time intensive, beautiful craft with market-driven production. The creation of an artisan rug is a lengthy commitment to deliver an artistically designed item for consumers in search of timeless beauty.

I was invited to participate in a livelihoods project with the American India Foundation and Jaipur Rugs Foundation in northern India. We would spend a week conducting field visits looking at the work and lives of people involved in the wool, hand-woven rug industry. Joining me from the American India Foundation were Fellows Palak Dudani and Tim Hefflinger. We were led by experienced development professional, Hanumant Rawat and assistant, Kanika Singh. Along in our journey were three other development professionals, including our intrepid guide from Jaipur Rugs, Yash. This was an incredible opportunity to see the work of the Jaipur Rugs Company (JRC), attempt to understand the complex lives of rug weavers, and develop a proposal to increase the dignity, income, and documentation of the intervention project. 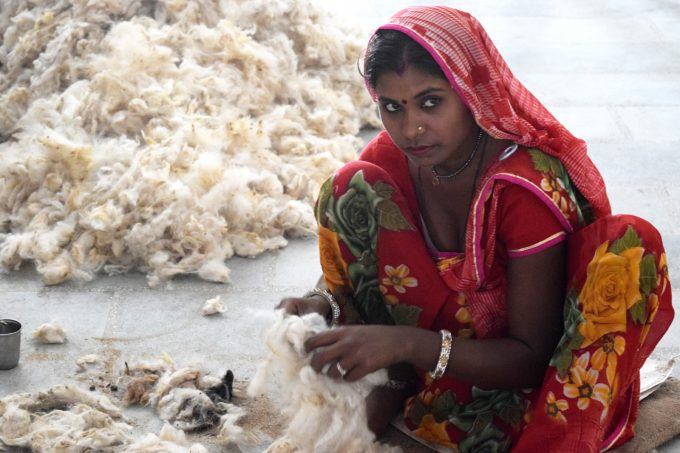 Nand Kishore Chaudhary started his rug business in 1978 and has lifted the Jaipur Rugs Company to work with over 11,000 weavers in a decentralized production system while becoming an internationally recognized institution. Operations span across six states and 600 villages in India with an overall base of over 40,000 artisans. The JRC finds roots, maintained today, in the hand-spun and hand-woven luxury rugs business. Additionally, the JRC is in the market of mechanized processes where rugs can sell in the larger market of cheaper, industrially produced rugs. 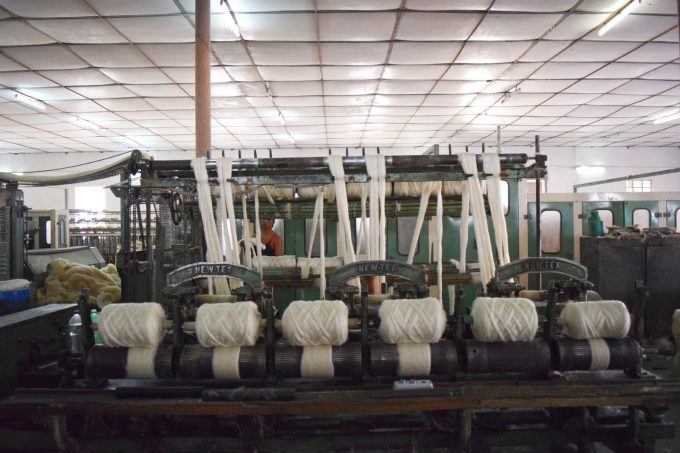 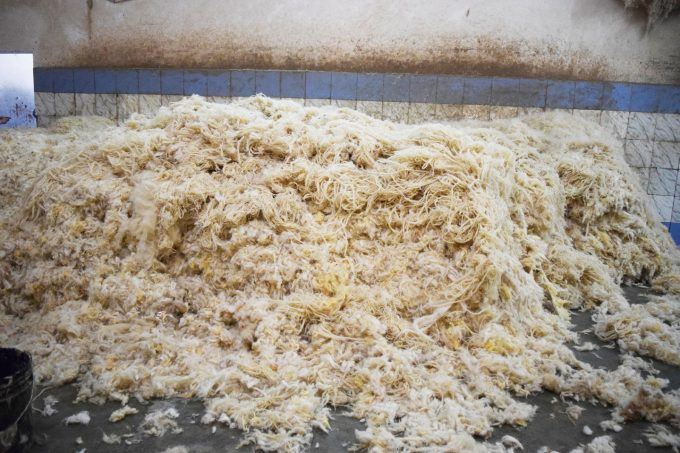 Manufacturers in countries like China have increased their production of cheap rugs, which has forced JRC to increase production in this area to compete. The middle class in the United States are often the consumer of these low-cost rugs. Hand-spun and woven artisan rugs are being pushed further into a luxury niche forcing the JRC to invest heavily on original designs to justify the time intensive labor it takes to produce hand-crafted rugs. Fortunately, their willingness to take risks provided great opportunities. They encouraged the weavers themselves to create their own designs and for the past several years, these “artisan originals” have been awarded numerous design and innovation awards. 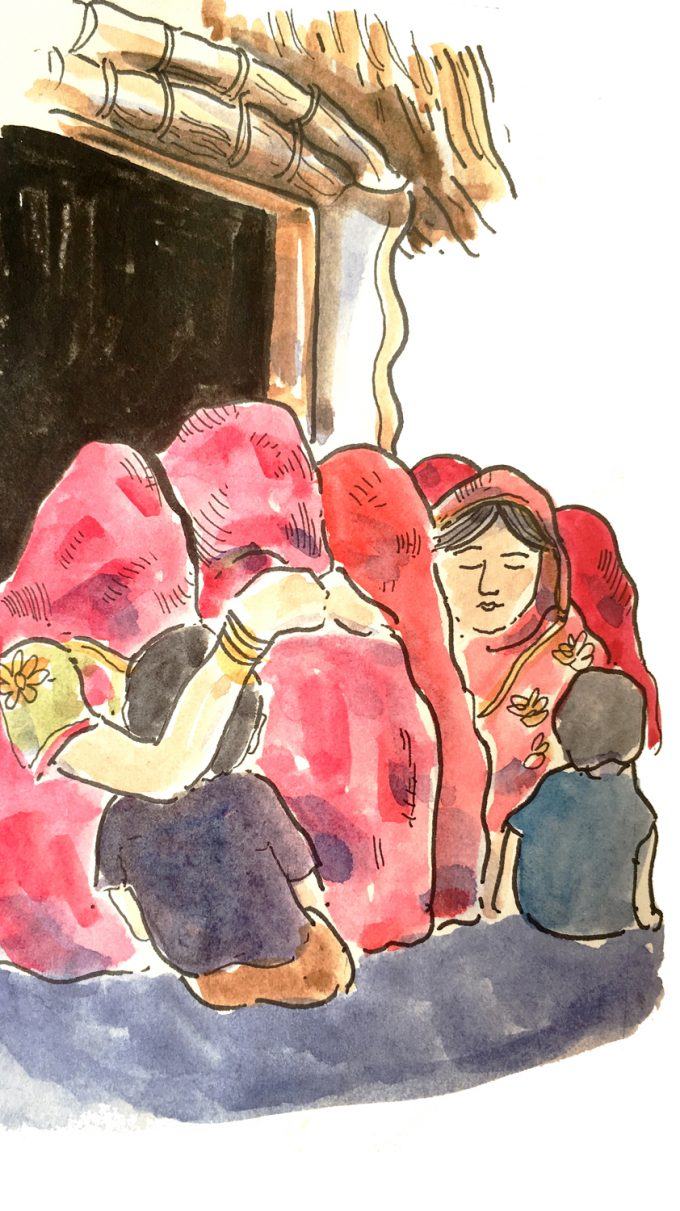 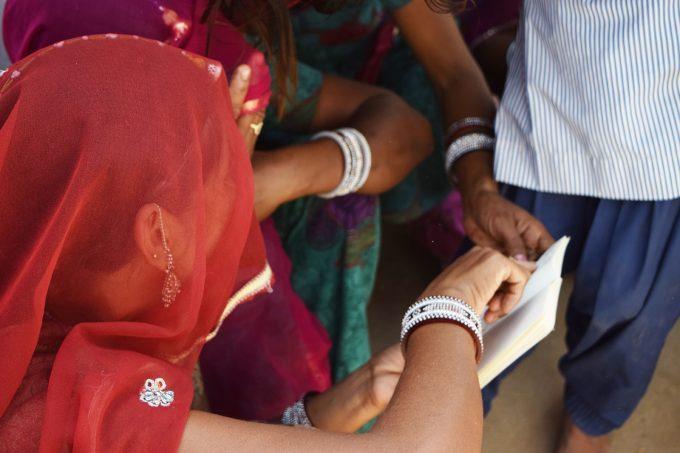 The group set off on our site visits in the scrub-desert conditions of Rajasthan. We were shuttled from artisans involved in spinning, to the rug repair facilities, mechanized spinning factory, and finally the artisan hand-weaving village. One thing that was noticeable was the gender distribution of the planning group. For some reason, in management and planning processes, men oftentimes dominate the field. In our group, we were a group of six men with one (later two) women. The demographic we chose to focus on was women artisans. Although each individual in the group was highly qualified and brought remarkable insights, additional women could have raised alternate perspectives and put interviewees at ease. 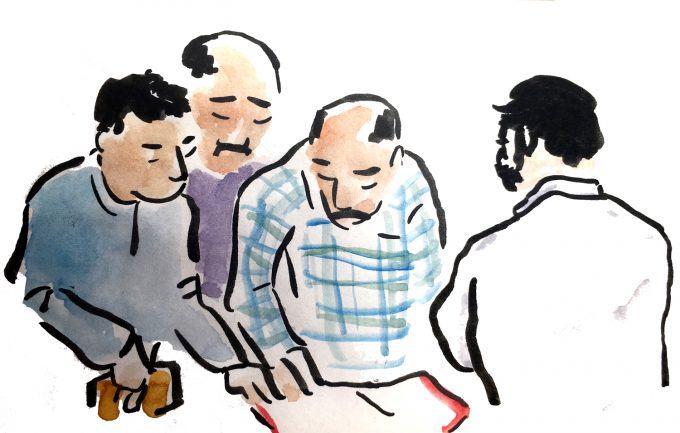 This brings up another observation, in the production process there are gendered labor roles where higher-skilled or mechanized tasks are done by men and handiwork is done by women. Of course, the top roles are paid more and provided more respect. What the artisan rugs can do is effectively flip some of the value chain upside down. If artisans are given their due respect from their designs, receive more profit from their original work, then they can receive more and dignity in their communities. 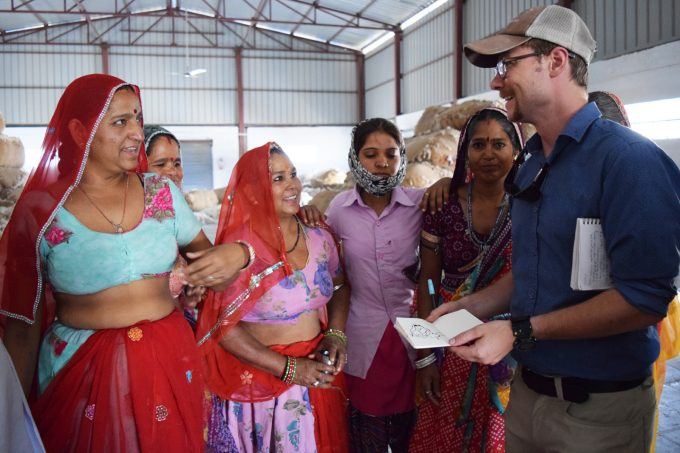 Working in our group, it became apparent that each person had a unique attribute or two that enhanced the planning process. We had our AIF mentor, who was the experienced lead; an intrepid JRF guide and fixer whose knowledge and social skills shaped what we learned; we had a businessman; a textile designer; a photographer and translator; a skeptic; and an illustrator. In the project-design phase, each person brought a bit more variation, but still the diverse perspectives shaped the outcome. In my role, I found (again) the value of sketching. Sketching participants and taking sketchnotes is a noninvasive way I’ve found to overcome cultural barriers, form relationships, and create lasting memories. I’ve used this technique in Mongolia, India, and with cowboy poets to great success. 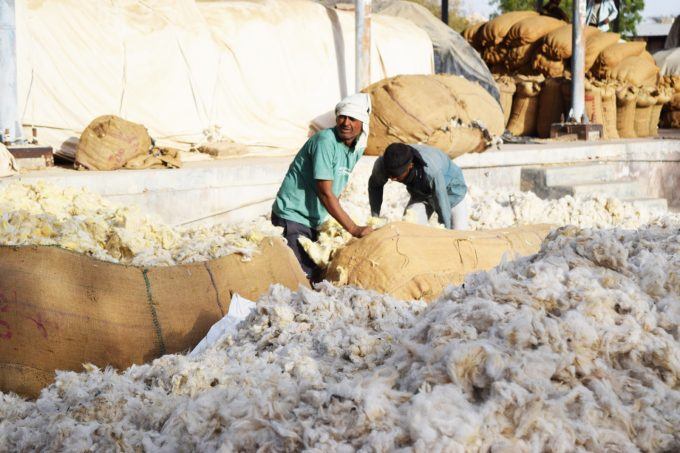 We met with the lead designer, Kavita Chaudhary, the company owner NK Chaudhary, members from the marketing, sales, and data management teams. Each character provided unique insights into the business, but the most valuable and insightful stories came from the artisans themselves. Their familiarity with the products and processes from the bottom was invaluable, which made me think of the process of human-centered design. 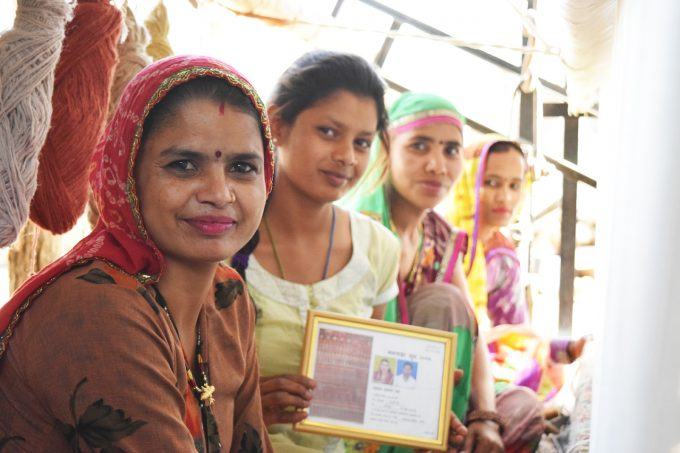 In many initiatives, people with less access to power (youth, elderly, laborers, poor, uneducated) are left out of the process earlier. People who tend to have access to power (educated, male, wealthy, professionals) can drive discussions where input is filtered through the process they promote. Their experience and leadership is pivotal to guiding in a structured direction, but can also provide barriers if their personality or input dominates the group’s direction. 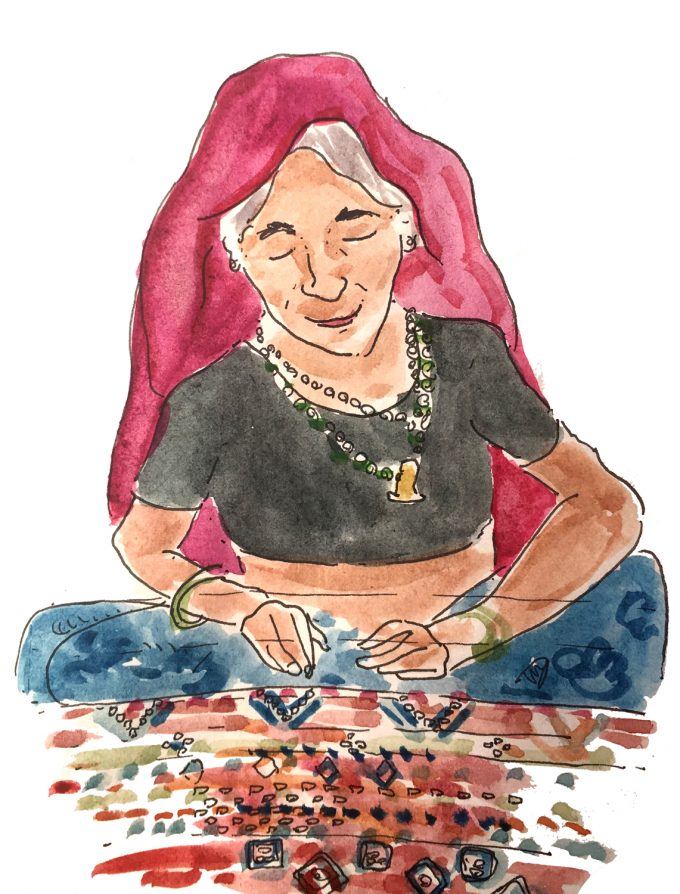 Human-centered design puts the input of community members at the center and beginning of development models and builds from their contributions. It is a co-creative and experimental process that uses certain visual tools (think: chart paper, makers, and sticky notes) to facilitate active meetings where filters are the evocative tools provided rather than a leader’s reframing or approvals. There are many crossovers between human-interaction design,  community and urban planning, and international development.

Additionally, an approach that I stumbled upon called, Strategic Doing is something that I hope to draw inspiration and learn how to take the planning process and shift to a doing process. Check out the resources at the end to see how human-centered design facilitation and strategic doing is being used in rural areas in the United States and abroad. 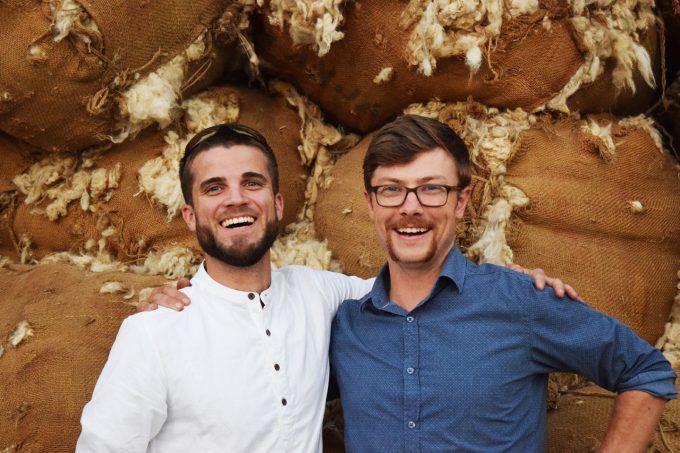 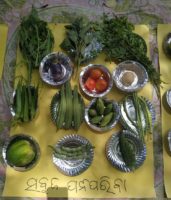 One thought on “Livelihoods Project: Artisans of the Rug Industry in Rajasthan”