If I talk about India and its life, easy lines do not do justice to the intricacies I encounter. If you would endeavor to peel off its layers of languages only, you would discover a hundred more layers left behind that. Similarly, religion is another layer of distinct faiths disguising countless layers behind those. Being a multi-religion nation, India has its own history of religions and their related concerns. In a book review about a 2004 anthology on the practice of purdah, the author gives context to the practice in relation to India’s history: “One feature of colonial India was the debate relating to gendered social practices carried out in the name of religion like child marriage, polygamy, female infanticide, oppressive high-caste widowhood, and purdah. Purdah or female seclusion, observed by upper caste/class Hindus and Muslims was the practice of keeping women hidden behind the veil, away from public gaze. Of course, contrasting to countless other reform issues, purdah could not be addressed through legislation but through deliberation and debate” [1]. The practice of purdah or veil is not merely dominant and customary among Muslims and Hindus, but people belonging to other segments as well. Public discourse in India and outside is rich in heated debates about purdah and the role it plays in the structure of patriarchy and the discrimination of women. In this context, calls for the confiscation of purdah from our society have grown louder. Various feminists, scholars, and like-minded folks have penned down an assortment of literature concerning how purdah is turning out to be a major factor for discrimination against women, strengthening of male domination, and violence related to women in our society. Other voices defend purdah as a form of privilege and freedom. It is easy to see the veil as a token of oppression, so I want to explore some of these questions in my blog today.

As an AIF Clinton Fellow, I am placed in Hyderabad, a melting pot of Hindu and Muslim cultures. The city is home to a rich cultural heritage that is speedily transforming into a lively and bustling metropolis, and along with that, slums. The condition of these slums is deteriorated in terms of infrastructure, education, economy, and livelihoods. [2] In a 2018 survey, it was found that both among Muslim and Hindu head of households, the proportion of non-literates, more than 58% was evident: “even among literates the most educated among them was up to high-school level in both communities in the slums.” [3] Women, due to their poor financial conditions, early marriages, presence of unsafe environment, family responsibilities, and lack of proper infrastructure, are either school drop-outs or illiterate. The survey found that family restrictions “are a leading negative factor in all the slums for the limiting the educational growth of women” [4]. SAFA, my Fellowship host organization, has reached to the most untouched slums of Hyderabad and is intervening in the domains of socio-economic empowerment of women, education, livelihood, and capacity building of people belonging to the marginalized sections whilst retaining their cultural fabric.

Between the dark and daylight

When the sun sank lower in the sky.

I saw lasses, older and young

Wrapped from head to foot

In black and blue veil.

I heard them laugh, lively and bright

With the sparkling eyes.

They say veil is

To pervert her liberty,

To wrap her existence

To limit her voice.

This black veil of faith,

Make her fickle to her true self.

Why this veil even for little girl? I asked.

“To avert that projection

of their filthy sight

To curb their outreach.

To let her take wings to

Where this world and heavens meet.”

A woman of forty, replied.

This is a poem I wrote about a very interesting and long conversation with Mehraj Begum, a forty-year-old woman working as tailoress in the production unit of SAFA. Her daughter Hajra is pursuing her graduation on a scholarship which SAFA has offered to her. When I went to one of SAFA’s skills training centers, everywhere I could see women of different age groups covered from head to foot in the black and blue burqa or hijab, showing their beautiful eyes and exerting a hope to a new beginning in their lives. All these women belong to marginalized sections and reside in slums of Hyderabad.

“How do you feel about SAFA and your hijab/burqa?”* I asked to those girls. 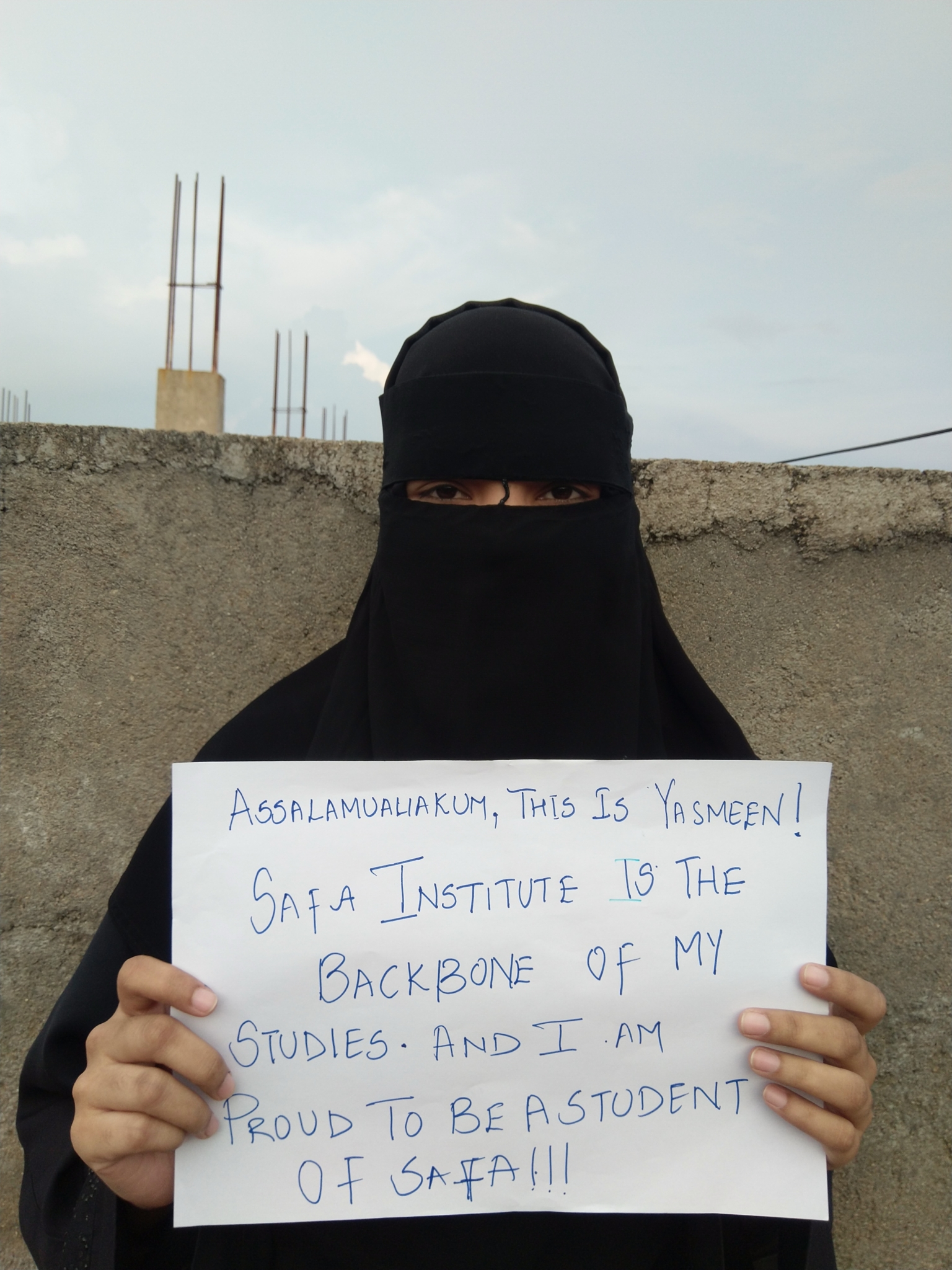 One of the girls said, “being a married woman is arduous to handle both your studies and your new family simultaneously. You have to pick either your further studies or your in-laws. And in-laws always come first since we don’t have enough options. If we go for our studies we will be called as bad wife/daughter-in-law/mother because we can’t devote our full time to them. Still I am pursuing my further studies only because of how SAFA counselled my family and its scholarship provision.” 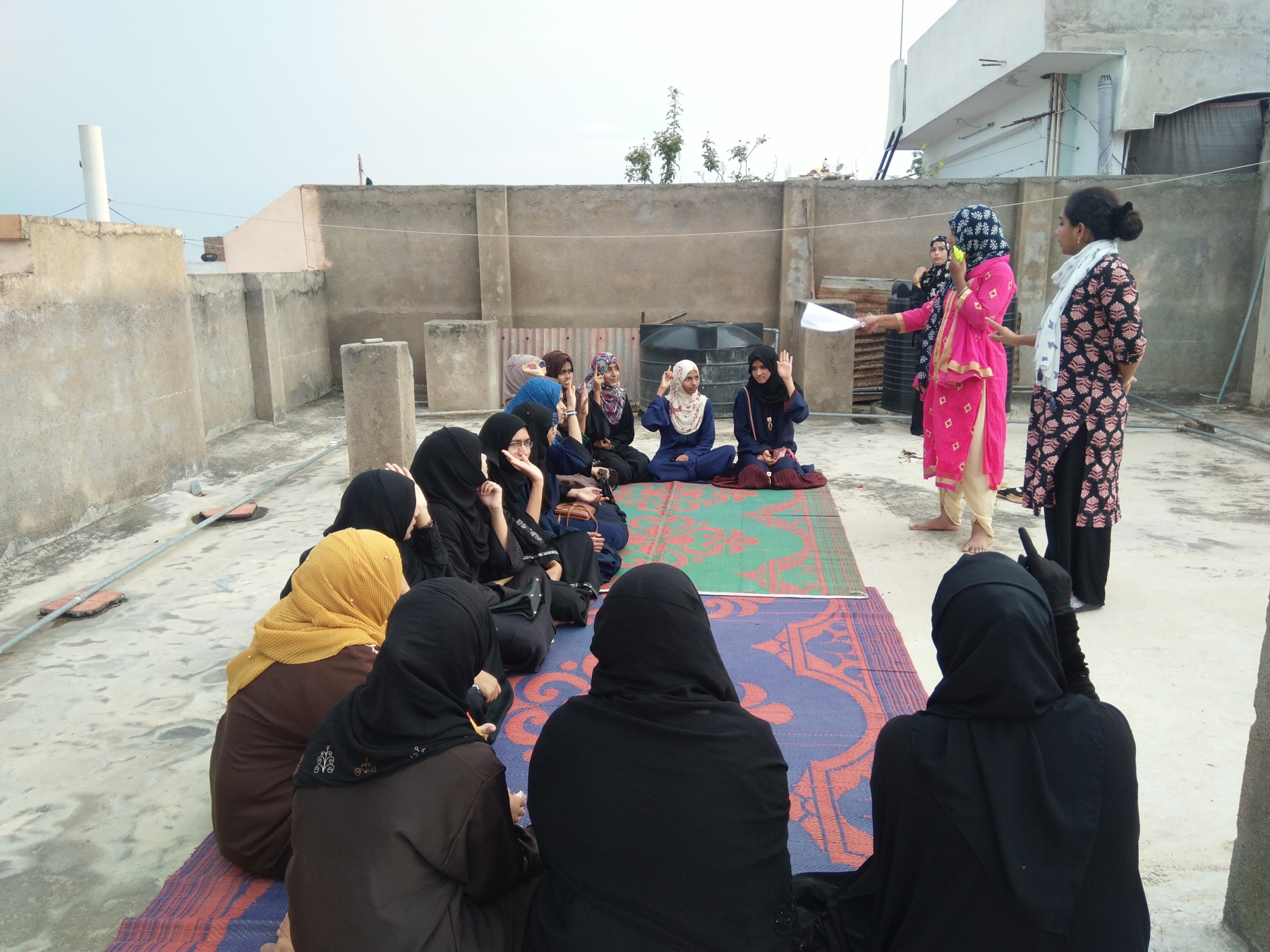 Another girl replied that “hijab or burqa never comes in our way to be independent or successful. Instead it makes it easier as our parents allow us to move outside in hijab or burqa.”

I heard a range of answers in support of purdah and how it helps these women to go a step ahead in their lives. Although these women would have to go through many more challenges before any real change comes around. They are trying to break the barriers to higher education and employment. Some of them can be found in Multinational Corporations (MNCs), working either as call center employees or professionals in other sectors. Some have set up their own small businesses or engaged with SAFA in its production units. Some are pursuing higher education in different fields. Despite such increased visibility, these women have a long way to go.

I believe that nowadays, purdah is not such an issue to focus on. What needs to be addressed first are issues like poverty, unemployment, lack of demanding skills, presence of unsafe environment, early marriages, and unawareness on the importance of education and other related matters. All these problems are emerging as leading negative factors in all slums for limiting women’s empowerment.

And I think this purdah (burqa and hijab) have turned out to be prime movers in ensuring fair education or employment prospects for both genders in these communities. Because men feel safe when their daughters, sisters or wives step out donning a burqa or hijab. The girls correspondingly sense themselves protected. However, I’m left wondering: “What if there had not been any carte blanche to go out even with the purdah?”

*All translations are mine.

Mantasha is serving as an American India Foundation (AIF) Clinton Fellow with SAFA in Hyderabad, Telangana. For her Fellowship project, she is designing a communication strategy for engaging illiterate and semi-literate women and children at skills training centers and for publicizing program impact externally. Born and raised in a small district in western Uttar Pradesh, Mantasha pursued her education from Aligarh Muslim University. She graduated in English Literature in 2015, pursued a post-graduate diploma in Journalism and Mass Communication in 2016, and completed her Master’s in Social Work in 2018. All through her academic pursuits, Mantasha weaved a dream of playing a part in the development sector. She began her career in Buildyourself Sewa Sanstha as project coordinator to work on skill development of youth and handicraft artisans in Moradabad. During her graduation, she spent a year to work as block coordinator in Nirbal Samaj Kalyan Parishad in Aligarh, focusing on education, health, and family welfare. She interned with Digital Empowerment Foundation in New Delhi, offering digital literacy to children in slum areas. Mantasha strongly believes in the power of storytelling and the capacity of a person to share their own to bring change and also draw inspiration from the stories of others. Owing to this belief, she particularly gets pleasure from creative works like composing poetry, writing quotes and short stories, painting and sketching, and art and craft works in her leisure time. She also enjoys learning new skills through virtual courses. Through the AIF Clinton Fellowship, Mantasha is tremendously excited to foster her experience and knowledge in the development sector. For her, this Fellowship would act as an incubator where she can implement her ideas and expand her learning.

One thought on ““Looking through the Purdah:” Finding New Possibilities”