Discovering the positive side of monsoon season in Bhuj, Kachchh, Gujarat. 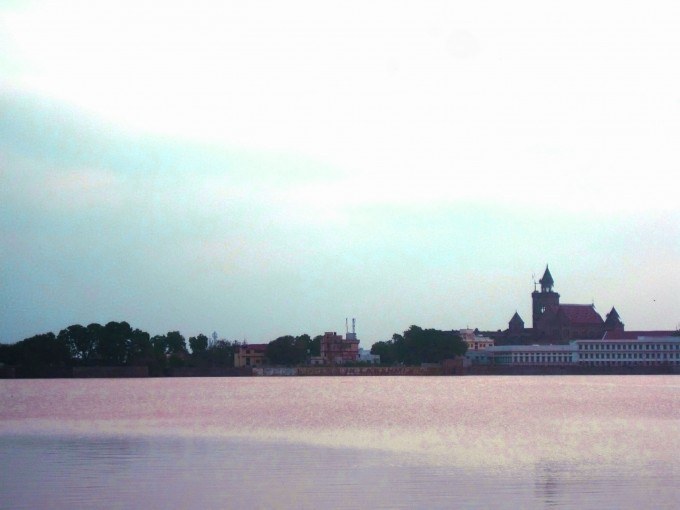 Every story should begin without expectations. However, over the past month I’ve been offered many expectations by many people. Most are gifts I am not intent on keeping. From the man who told me in line at the airport that Bhuj was a “dry place, dry as in boring,” to the guy who outlined the supposed swirling, inconquerable differences between my “Western” home and the apparently exotic “East,” it’s been easy for me to reject the negative expectations of others. By turning a blind eye, I am protected against their misconceptions. However, I also leave myself vulnerable to the harsh reality that maybe, just maybe, I might discover exactly what they had warned me about.

My story in Kachchh began with rain.

On my third day in Kachchh, it rained. It started in slow trickles, escalated into a downpour, and then stopped in time for an afternoon of sunlight. I was still feeling like the new kid in the kindergarten classroom, when all of a sudden my coworker appeared and said, “you are lucky for Kachchh.” I looked up, kind of confused. He pointed outside and said, “it’s raining,” with an incredibly genuine smile on his face and in his eyes. I realized pretty quickly that it wasn’t me who was lucky for Kachchh, the rain was lucky for Kachchh.

Rain here is a cause for celebration, for pujas to Lake Harmisar, and for regional holidays when the dam overflows. Each drop seems to wash away the fear of drought and lack of livelihood that looms in the back of peoples’ heads. On a recent field visit to Ajrakhpur I met local block printing artisans who made the problem of water scarcity real. The natural dyeing of textiles uses roughly 25 lakh litres of water a day during peak season in Kachchh. That is water  the region simply cannot afford, and so a craft that is intrinsic to the local identity has become incredilbly hard to sustain. Part of the reason water is so scarce has to do with the shifting water table during the 2001 earthquake in Gujarat. A large percentage of the available water is also saline, due to the high salt content of the local desert and soil.

Bringing water to Kachchh has been a theme in the development sector for some time, and political leaders like the BJP’s Narendra Modi, currently in the throws of election season, are celebrated for their efforts in doing that. Unfortunately that work is far from over. While the lake in Bhuj has filled and the dam has overflowed, most dams continue not to hold their storage capacity. The bittersweet reality is (as of September 25) Kachchhi dams still hold less water than in 2012, a year of horrible drought in the region.

Our deluge of rain left some families without power. It made some newsmakers skeptical about the real impact of the rain in Kachchh – would this really be enough water? People had to shift houses, and a small number of deaths occured nearby due to what DNA India called “rain fury.” Nevertheless, the past two weeks have brought an overwhelming energy and joy to Bhuj. It is impossible not to notice that people are excited. Crowds of people come out for evening walks, natural wildlife has returned to the lake, and I’ve been stopped several times by strangers who remind me that the water is a new addition to the city.

When I arrived in Bhuj, Lake Harmisar was a lake only in name. Really, it was an expanse of dry, desert land. It was common to see people and animals walking across the vast, dry plain. Now, the lake is filled to the brim. From the roof of my apartment building I can see Lake Harmisar curling around Rajendra Bagh, and it is a beautiful thing.

To every person in Kachchh, the rain seems to means something. For some, the rain means a fresh start at life, or a chance to move their herd to a new locale. For others, it means shifting homes or saying goodbyes. For the lady who stopped to chat the other day, it meant, “nice temperatures for once!” For most, it means revelry.

For me, a newcomer, the rain means being introduced to a place in the midst of something important. The rain has washed away all the false expectations of Kachchh that I heard from others. Day after day, downpour after downpour, this month has been a collection of lessons. Each day brings the exciting promise of meeting someone new, of learning pieces of history, of feeling more at home… and in the rythym of life in Bhuj I find myself losing track of being in a supposedly very different “East.” We in Kachchh are all being and doing in a moment full of hope, thanks to the rain.

The dust on the lake is finally settling, and I am beginning to find my place in Bhuj.

Coco comes to the AIF Fellowship with a passion for art, visual culture, and artisan craft as means for creating sustainable livelihoods. Coco became interested in India after spending a summer volunteering at a K-12 school in Pali, Rajasthan at age 15. She went on to earn a BA in Asian Studies with High Honors from Colgate University. As an undergraduate, Coco completed field work in Northern India through NYSICCSI, collecting miracle stories from Shirdi and Sathya Sai Baba devotees. North India ignited her appreciation of artisan communities and fair trade movements in rural India. Coco further explored India's visual culture in her senior thesis on the role prints depicting Bharat Mata before 1947 played in the evolution of Indian national identity. A two time Upstate Institute Fellow, Coco brought her aptitude for field work and marketing experience to Upstate New York, where she completed community outreach projects for cultural preservation and art initiatives in the Adirondacks, Utica, and Madison County. As an undergraduate she was a student ambassador for Colgate's Multicultural Center and President of Masque & Triangle, Colgate's student theater. After graduating, Coco was a US Department of State Critical Language Scholar in Jaipur where she continued her study of Hindi at the American Institute for Indian Studies. Coco looks forward to working for Khamir this year, where she will learn more about artisans and art practices in Gujarat.

4 thoughts on ““Lucky for Kachchh””