At Avani, my job is to go on Facebook and Instagram every day. Much like someone from Florida or California who proudly claims, “I live where other people vacation,” I can say, with no small degree of sheepishness, that my work with social media often involves what other people do for fun (or, if not “fun” per se, then at least some mindless distraction).

The irony is not lost on me that in India, a country full of chaos, color, and an overwhelming barrage of stimulus, my job is frequently to sit behind the glow of a computer or mobile phone, accumulating “likes” and “follows”, and measuring things like “engagement” and “conversion rates.” At a place like Avani, where many international volunteers come to campus with the stated intention of “disconnecting” from the modern world, I often feel like an outlier, battling daily with the intermittent internet connection to get one more Instagram posted or download our latest Facebook page analytics.

This discomfort is more than just cosmetic. For me, my challenge has been not just the mere strangeness of the endeavor, but the difficulty in articulating why, despite all the negative press social media platforms have been receiving recently, this work is important to an NGO’s success. After all, when my announcement at a team meeting that Avani’s newly created Instagram has reached 1,000 followers is met with blank stares, I can find myself questioning the value of this work. “Nobody cares about social media here,” I’ll think despondently. And why should they care? Up here in the Central Himalayas, surrounded by staggering natural beauty and a rich, vibrant community, getting excited about followers on Instagram feels irredeemably petty.

Yet despite these doubts, I have gradually come to believe that this social media work is critically important for rural, community-based cooperatives. The communities Avani works with are isolated in the extreme. Delhi, the closest city to Avani’s campus, is a 14-hour journey away. Many of the villages Avani works with are inaccessible via road and require extensive trekking through rugged terrain to reach them. Without the power of digital platforms such as Instagram and Facebook to share the stories of these communities, much of the work Avani is doing would go unnoticed by the wider world. Moreover, the individuals who have been exposed to Avani’s work through social media are often impacted in some way, whether through simply becoming more aware of the challenges faced in rural communities on the other side of the world, or being spurred to volunteer, contribute money, or purchase more sustainable products. Indeed, there have been few interactions more satisfying to me than the many volunteers who have come to Avani in recent months saying, “I saw this organization’s work on Instagram, and I just had to come see it for myself!”

Of course, this understanding is all well and good, but the real challenge is in communicating it effectively to the community in question. I never realized until I arrived at Avani the extent to which I take my fluency with all things “digital” for granted. Having grown up using Facebook and shopping online, the social media work I do often feels overwhelmingly easy, and therefore easy to dismiss. Yet when I communicate this same work with my team, I often feel as if I am speaking a different language. How do you explain what a “hashtag” is to a group of people who have never owned a smart phone? More importantly, how do you get them to care?

What I hope, ultimately, is that the work I’ve done with Avani’s social media says something to the communities Avani works with about the importance of their stories and voices. One specific incident stands out to me in this respect. Early in my fellowship, I decided that I would create an inaugural blog post series for the Avani website titled, “Meet the Makers”. Each entry would feature an in-depth interview with a farmer, dye-worker, weaver, or spinner from Avani’s supply chain. When I arrived in the weaving center one day to interview one weaver, many of them seemed surprised. “Why are you interviewing us?” they asked, giggling. “We’re just weavers. We don’t have any skills.” The sentiment shocked me. Volunteers and customers across the globe had unanimously praised the quality and craftsmanship of Avani’s woven goods, and it was clear to me that these weavers were experts at their craft. But for many of them, “weaving” was just a job, not meriting any sense of pride or ownership.

Through the many interviews, photo sessions, and exhibitions I worked on with Avani’s weavers, I was able to bring the stories and skills of these women to a larger, more global stage. My hope is that in the process, these weavers were able to realize that the work they did was a skill worthy of being widely shared and praised. I want these women to see themselves as Weavers with a capital “W”—skilled, talented professionals in possession of an increasingly rare talent. In my work, I have come to believe that social media, despite all its flaws and superficiality, has the power to spur this change in thinking, fostering a sense among the Avani community that the work they were doing is worthy of being shared, celebrated, and appreciated. In a world where women are often instructed to sit down, be quiet, and take up less space, broadcasting stories online can feel like saying, “I hear you. I care about you. Please tell me more.” 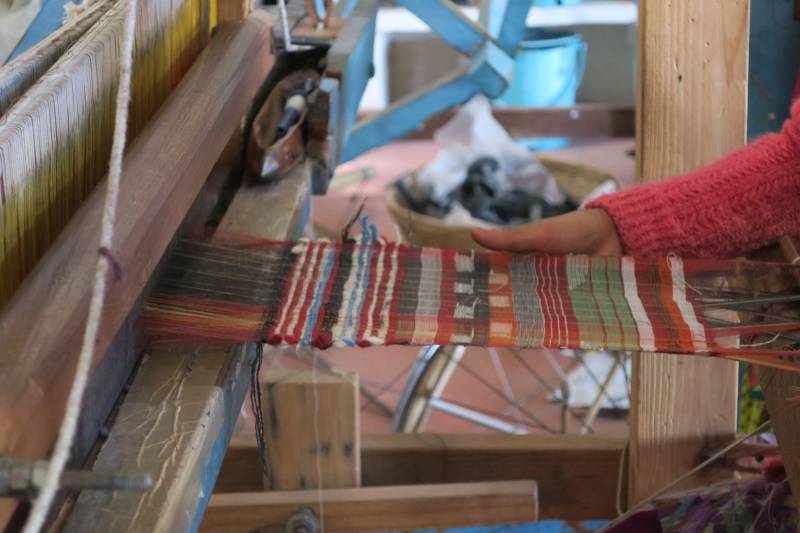