During my first month in India I had the opportunity to see His Holiness the Dalai Lama speak about peace in a talk entitled “One World, One Vision, One Future”. His talk was focused in part on the 7 billion people in the world and how we do not always interact with each other in the most conducive way to ensure that we all share a prosperous future. It was discussed that the world could be a much better place if world leaders practiced compassion and love for others, and if these ideals were applied to real world decisions. 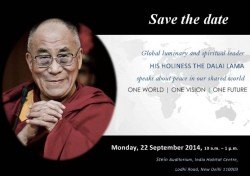 On the four day holiday weekend of Navratri following that talk, I decided to visit Dharamshala, the home of the Dalai Lama and the Tibetan Government in Exile. I unknowingly arrived on Gandhi’s birthday, October 2nd, which was also the 25th anniversary of the Dalai Lama receiving the Nobel Peace Prize, so His Holiness was giving a speech at his temple that I was able to attend. The temple had a few posters with quotes from the his Nobel Peace Prize acceptance speech. During this talk the Dalai Lama advised us to follow Gandhi’s message of peace, non-violence and simple living in our daily lives. 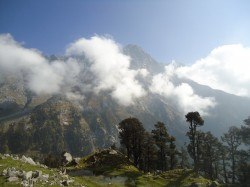 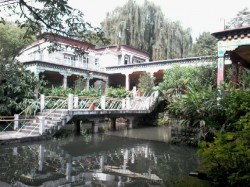 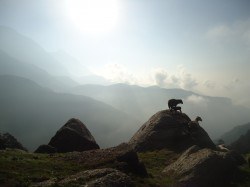 Yom Kippur, the Jewish “Day of Atonement” and the holiest day in the Jewish calendar, happened to fall on my final day in Dharamshala. On this day we fast from sundown to sundown while repenting for the past year and making a commitment to be a better person for the next year. While I am not very religious or believe that if we are good we will be inscribed in God’s good book for an auspicious year, I do observe the fast and use the time to reflect on what kind of a person I am and what kind of person I want to be. I think the practical side of religions is important, which is similar to something the Dalai Lama said in his Nobel Peace Prize acceptance speech, “I believe all religions pursue the same goals, that of cultivating human goodness and bringing happiness to all human beings. Though the means might appear different the ends are the same.” 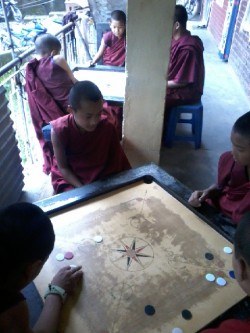 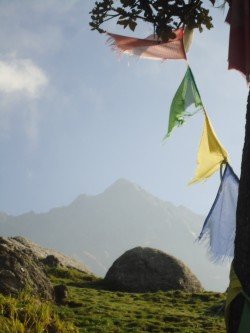 Observing the Yom Kippur fast in Dharamshala had a higher degree of difficulty than usual fasts. Tibetan food is amazing and Dharamshala might be the closest I will ever get to experiencing real traditional Tibetan food. I have had a lot of great Tibetan food in India like thukpa and thenthuk soup, chow mein and fried rice, but my staple has been momos. Momos are steamed or fried dumplings that can be filled with vegetables, chicken, water buffalo, mutton, cheese, potato, and probably other fillings that I have yet to find. Momos are ubiquitous on the streets of Delhi. There are five momo-walas that I pass on my walk home from the metro every day, and I can rarely run the gauntlet without getting a plate. The momos in Delhi are great, but Dharamshala’s momos are immensely superior. If there is a God he must be omniscient, in which case he is familiar with momos and my love for them, as well as the quality of the momos in Dharamshala, which would entail that he understood the magnitude of my fast, and was therefore inclined to inscribe me into the good book this year, meaning 5775 should be auspicious for me, if God exists. 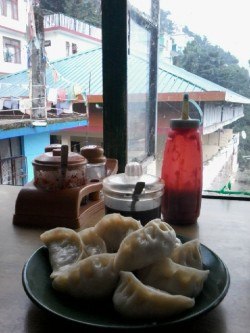 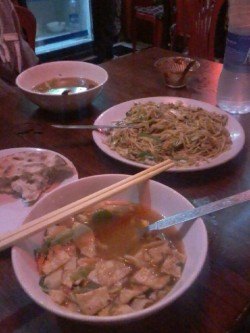 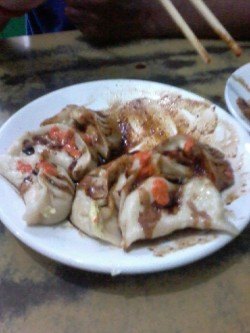 An extraordinary irony underlying the observance of Yom Kippur in Dharamshala is that there are swastikas all over the place, which is common in India and Tibet. The swastika symbol is estimated to be about 12,000 years old, and has been used by Hindu and Buddhist cultures as a sign of luck, good fortune and peace. There are swastikas on temples and other religious sites, store fronts, houses, rickshaws, and just about everywhere else. A symbol of fortune for some Eastern cultures, will forever be a symbol of hatred, destruction and genocide in Western culture. 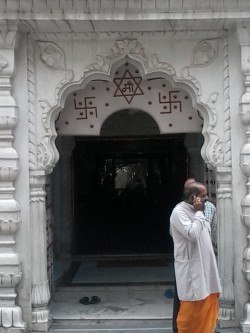 Between Yom Kippur, the fast and the swastikas, I thought about the history of the Jewish people, particularly the thousands of years of persecution and oppression with intermittent Diasporas, and I could see a correlation to the recent history in Tibet, from the Cultural Revolution to the Dalai Lama fleeing and living in exile. In his Nobel Peace Prize acceptance speech the Dalai Lama said “(The Tibetan people) confront a calculated and systematic strategy aimed at the destruction of their national and cultural identities.” Many groups of people can insert themselves into that statement, the Jewish people included. 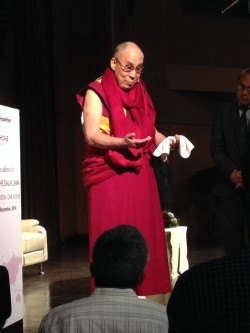 In his Nobel Peace Prize acceptance speech the Dalai Lama said, “No matter what part of the world we come from, we are all basically the same human beings. We all seek happiness and try to avoid suffering. We have the same basic human needs and concerns. All of us human beings want freedom and the right to determine our own destiny as individuals and as peoples. That is human nature.” While human nature might involve seeking personal happiness and avoiding personal suffering, I am not sure it necessarily entails compassion and love for others, and I wonder if we can evolve. I wonder what the world would be like if more world leaders adhered to the Dalai Lama’s beliefs and placed emphasis on cultivating human goodness and bringing happiness to all human beings.

Adam grew up in New Jersey and attended the Pennsylvania State University where he received his BA in Philosophy. After graduation he tapped his entrepreneurial spirit and launched a chain of successful restaurants at Universities throughout Midwestern America. After five years of owning and operating restaurants, he decided to sell his businesses and join the U.S. Peace Corps to follow his passions for international development and traveling abroad. As part of the Peace Corps Small Enterprise and Entrepreneurship Development Program, Adam successfully secured several hundred thousand USD in grants and loans for the various organizations. Adam spent the first half of his two year service working with the Cheetah Conservation Fund, and had the opportunity to work on a UNDP initiative aimed at environmental conservation and community economic development. During the second year of his service, Adam worked at Elephant Energy Trust, which makes quality solar products accessible to rural villages throughout Namibia.

One thought on “Momos, Swasitkas and the Dalai Lama”