I woke up at 7am, then hit the snooze button on my phone to go back to sleep. I did this several times, getting closer an closer to my previously planned time of departure. Finally, I got out of bed and headed down the road to catch a bus to College More, the bus stop in the Sector 5 area of Salt Lake, Kolkata where I was to continue on to Garia, a part of town I had never been to before. Walking down my little road, I noticed that it wasn’t quite as lively as it usually is around 9am. I stood at the bus stand at the end of my road, waiting for a bus to come barreling down the way. As one quickly approached, I shouted in the human-filled open doorway, “College More?!” The bus attendant with his wad of bills folded between his fingers shooed me away with the flick of his wrist, not letting any crumpled bills escape his grasp. I know perfectly well that pretty much all the buses going this way go to College More, so I waited for the next bus. Barreling, it came.

“College More?!” I shouted yet again. Another wave of the hand dismissively. But then the bus attendant second guessed himself and asked to confirm if he’d heard correctly, “College More?!” he shouted back in what was confusingly very similar pronunciation to what I had just yelled to him.

“Hah! College More!” I bellowed. He beckoned with a sideways nod of his head, wordlessly confirming that the bus went that way and that I could board before the bus continued – not that it had stopped. Such are many a morning conversation here in Salt Lake. I descended at the College More stop and waited for more shouting matches, more two-syllable conversations, but this time they would be over more honking of more cars passing. More buses approached, barreling less, but swaying more. The names they shout out as they approach often sound like one long word.

“Garia Station?” I asked one dumbfounded. Often – so often – the only communication for me to board a vehicle is a twitch of a head, a flick of the neck, a jerk of the wrist. I got on and sat in the back, bouncing along with everyone else as we headed down the road in the morning light. I texted my mentor, Anita, to let her know that I had triumphantly and successfully boarded a bus to Garia and that I was on my way. “Great, glad to hear it,” she texted back, “see you soon.” The bus ride was typical, and rather what I had expected – morning passengers on their way to work, ladies in bright-colored saris slowly climbing the high bus stairs, children in arms surprisingly not whining or crying given the high amount of traffic hubbub around us. I assumed the semi-attentive bus attendant/ticket-taker would let me know when we reached Garia Station, but I didn’t have to ask.

After riding through areas of Kolkata I’m still not familiar with, we approached a long, black, unfortunately trash-ridden canal, one that had unmoving, tar-looking what-once-was water in it. My heart sank as I raised my handkerchief to my nose, trying to clog the passageway from the outside stench to my sense of smell and lungs beneath. One could see the areas where canal-side food stalls would very simply dump trash right over their walls, directly onto the banks of the helpless Tolly canal. Needless to say, it was a sobering moment to an otherwise relatively fast-paced morning.

Upon reaching the end of the canal, we stopped, and for whatever reason (why, I still don’t know) thick smoke began entering the bus through the open windows as passengers began descending one by one off the bus. “Have we arrived?” I asked myself. Either way, people were getting off and I soon decided that I should follow, given the great amount of strange black smoke not ceasing to blow into the bus. To end our conversation together, I asked the bus attendant one final question.

“Garia Station?” I asked. Again, the head wiggle – only raising my hopes in that this odd, smoke-filled canal-side spot on the road was some kind of station. There were giant, tank-like yellow Ambassador cabs lined up side by side, forming a kind of above-water fleet of bloated, East Indian yellow submarines with wheels and colorful, big-eyed Hindu trinkets hanging from the windows and mirrors. Men in short-sleeved, grey, shabby, stained, tattered, and worn suits stood out front, leaning casually on their vessels, smoking tiny little leaf-rolled beedie cigarettes. I hung out with them for a little while.

“Hah, ami Bangla jani ektu-ektu, bhaia.” He turned to his friends and made some kind of a joke or another, eliciting laughter from his entire cohort. They were nice enough.

“Amar desh America,” I said, regurgitating well-practiced phrases I had learned in Bangladesh two years ago. We hung out together for a bit before I wandered off in another direction to figure out exactly where I was. My phone rang.

“You think? John, my goodness, where in heaven’s name are you?”

“Yeah, I’m in Garia. I got off the bus at the Garia Station.”

I did as I was instructed. I waited on the side of a busy intersection where a large red bus nearly ran over a motorcyclist. There was such a traffic jam that the bus was inching forward, not knowing that he was slowing pushing over the back of this guy’s bike. There was quite a kerfuffle as the two men exchanged words in the middle of the intersection as traffic honk-ish-ly crawled impatiently around them. Turns out I was at Garia Station, not exactly where I was supposed to be, for I was supposed to be at Garia Bus Stand No. 5, but when I asked the bus attendant about this place, he gave me the ‘shoo-fly-don’t-bother-me/I-don’t-understand-you-silly-foreigner-buzz-off’ hand swat/wave-away. Indeed, I was in Garia, but not exactly at the right location. I moved toward another fleet, this one of rickshaws, baking in the rising morning sun, sitting patiently outside a small Hindu temple/shrine. People would occasionally walk up to the shrine, raise their hands clasped together to their forehead, close their eyes sometimes, mutter something to themselves, and move on. There was a lot of activity going on around me. My phone rang again.

“John, can you give the phone to someone there?”

The closest person near me was a cool rickshaw wallah smoking slowly on a tightly rolled beedie.

“Bhaia please, amar did ashbe,” I said, because I didn’t know what else to say, and I awkwardly handed him the phone, hoping that he’d both humor me and help me out at the same time.

“Hello?!” he shouted into the phone. When he was done, he handed the phone back to me, gesturing with his hand for me to sit still and relax – whoever it was he was just talking to would be on their way shortly and there was no need to fret at all. I walked across the street to drink some fresh coconut water, as I hadn’t had anything to eat yet today. I approached the guy selling coconuts piled on the ground and pointed at them pretty obviously, gesturing like a cave-man to succinctly communicate ‘me want coconut’. He leaned over his stock and grabbed the biggest one in the pile and began hacking away at it with a kind of curved blade that he kept close. Little bits and piece of green coconut shell began quickly dropping to the ground one by one, adding to the pile that was already well accumulated at his feet. He poked a hole in the top, stuck a thin little lime green straw into it and handed it to me. I sucked away at the sweet tasting water, letting my innards enjoy the replenishing liquid.

When I finished I extended the now water-less coconut back to him, and he raised his curved blade as though he was going to chop something else. Turns out he was just using the blade to grab the coconut from me – before I knew it, the fruit was out of my hands and stuck to the pointed end of his blade. He had grabbed it so quickly that I didn’t even see it leave my hands. Next thing I knew he was hacking away at it again, scooping out the little white meat that lay buried inside, attached to the inner coconut. I was munching on that when I saw Anita’s blue car off by where the taxi fleet was stationed across the road. I saw her waving and I waved back, then I saw her driver coming towards me waving frantically, so I waved to him too. I quickly finished the coconut, paid the vendor, and walked toward the car in what would be a much smoother and more air-conditioned ride to Baruipur, a town further south of Kolkata where iMerit and Anudip hav one of their centers. I had my camera with me, but unfortunately, the only lousy, blurry shot I got that morning was from my phone while seated in the back of the morning bus to Garia. 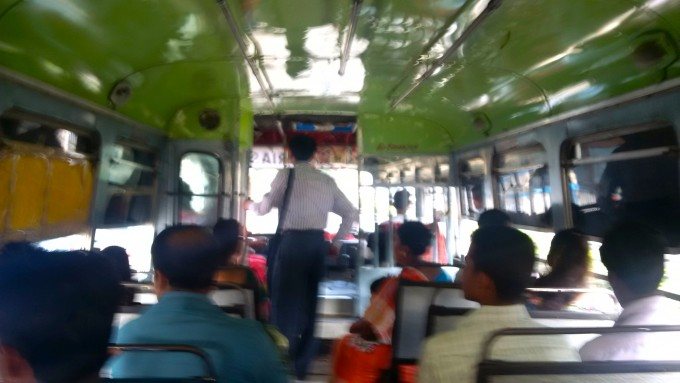 John's interest in international education began six years ago when he took his first teaching job in Piedmont, Italy. Since then, teaching internationally has taken him to five different continents, allowing him to pick up small amounts of various languages along the way. Having most recently completed an English Language Fellowship with the US State Department in Abidjan, Cote d'Ivoire, John is excited to begin his journey as an educator and trainer with AIF in Kolkata. In 2013/2014, John taught English composition and critical thinking skills to young women from all over Asia at the Asian University for Women (AUW) in Chittagong, Bangladesh. This increased his interest in working in South Asia and learning Bengali. When not found teaching in the classroom, John can be found reading, playing cello, swimming, writing, eating potentially dangerous street food, and hiking.