On December 6th 2016, the American India Foundation hosted a Fellowship Alumni Holiday Mixer at the midtown Manhattan office. This event gave alumni and staff alike an opportunity to meet and discuss new changes that are being implemented in the Fellowship. The mixer was attended by five alumni and three staff members including the newly appointed CEO Alex Counts. As the meet up was holiday themed, the New York Program Officer for the Fellowship, Katja Kurz, did a great job of decorating the office in holiday spirit and the Indian cuisine offered was thoroughly enjoyed by all.

As one of the alumni present, I speak from personal experience when I say that the event was a success on all accounts. My reasons for attending the event were to learn about the recent changes being made to the fellowship program while also meeting other alumni, both of which were fulfilled. The event began with sharing sessions from different alumni on their own personal fellowship years and where they are now. Following this, Katja delved into presenting the updates currently happening within the fellowship. Among a change in how the application and acceptance process is done, changes include increased vetting of the host organizations, improvements to the mentoring aspect of the program, and an elongated orientation process. After these changes were explained, alumni were able to bring their own ideas to the table and offer feedback on the changes that were being implemented. In addition to this discussion, Katja and Alex also opened the floor for talks on how the alumni network could become more active and involved within the fellowship. This long conversation discussed all the possible avenues for connection and moved toward a topic and plan that had been in the works for a while now by both fellowship staff and alumni alike.

The event ended with holiday greetings by all who attended and holiday chocolates and cookies were gladly scooped up after promises of seeing each other in the New Year. All in all the Alumni Holiday Mixer was a successful event. It truly gave all alumni who attended a good avenue for connecting with each other, and began a process of communication between AIF staff and alumni that I truly hope will be continued from here on out. 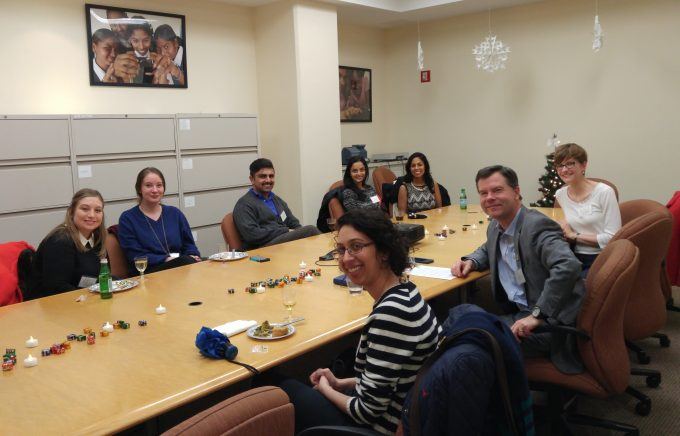 Alyssa has been in the field of International Development for the past 6 years working mainly in the education sector. During her junior year in college, she was able to spend a semester in Niamey, Niger. While there, she had her first taste of development, teaching impoverished children. After college, Alyssa moved to Jaipur, India to take a job teaching English in a slum dweller community. From there she moved to Chonburi, Thailand to teach at a government high school for a year. Upon returning to the US, Alyssa became part of an AmeriCorps program called City Year in Baton Rouge, LA which works with low-income high school students who are at risk of dropping out. Alyssa spent this past year in Hyderabad, India surveying government secondary schools with the NGO VOICE4Girls.