New York, NY, October 24, 2017: Nishant Pandey, AIF’s successful India Country Director over the last three years, has joined AIF as its CEO based in New York. In this role he will build on the important programmatic, institutional development, and fund‐raising successes he has achieved in India.

Nishant joined AIF in 2014 with nearly two decades of global development experience, including work in countries such as Russia, Tajikistan, Georgia, Azerbaijan, Armenia, Albania, Yemen, Egypt, Lebanon, Morocco, Jordon, the UK and India. Prior to AIF, he served in Jerusalem as the Country Director for Israel and the Occupied Palestinian territory at Oxfam, a global development organization operating in 80 countries worldwide. In this capacity, he led Oxfam’s social development and humanitarian operations in Gaza, West Bank, Jerusalem and Israel and Oxfam’s global influencing work on the Israel – Palestinian conflict. As a British Chevening scholar, Nishant completed his Master’s degree in International Development & Finance from the University of Leicester, UK. He also holds a Master’s degree in Economics and a Bachelor’s degree in Anthropology and Economics.

“I am thrilled about the prospect and promise of taking AIF to greater heights and the opportunity for me to contribute to this journey,” remarked Nishant. “I am confident that working together, we will achieve our ambition of touching the lives of 5 million women, men and children over the next 5 years.”

Nishant joins AIF as the fifth CEO and succeeds Alex Counts, who will serve as Senior Advisor during the transition period.  “I wish to extend both my personal and professional gratitude to Alex, whose many contributions to AIF include positive changes that have strengthened the organization significantly,” said Nishant.

“We are excited to have Nishant as the CEO to lead AIF to the next level,” stated Co-Chairs Lata Krishnan and Ajay Banga. “We thank you for partnering with AIF and hope that you will join us in working to make this important leadership transition a success and to demonstrate our continued commitment to the joint humanitarian mission that we share. We welcome any questions or suggestions you may have.”

About the American India Foundation

The American India Foundation is committed to catalyzing social and economic change in India, and building a lasting bridge between the United States and India through high-impact interventions in education, livelihoods, public health, and leadership development. Working closely with local communities, AIF partners with NGOs to develop and test innovative solutions and with governments to create and scale sustainable impact. Founded in 2001 at the initiative of President Bill Clinton following a suggestion from Indian Prime Minister Vajpayee, AIF has impacted the lives of 3.1 million of India’s poor. Learn more at www.AIF.org 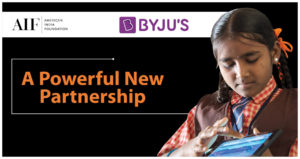 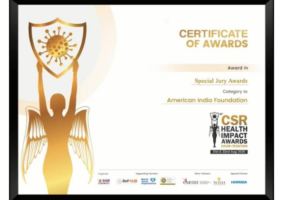