The 30 fellows scattered around the subcontinent met for the first time in three months this January. The location, astutely chosen, was amidst the Bandipur forests – away from the din of the city and all cellular connectivity. This wasn’t a tragedy for me, particularly, because the people I’ve been talking to the past three months happened to be right there with me.

It was a rather lovely night, the moon was out and the stars were bright. A bunch of us decided to sit outside after dinner and catch up on what we’ve been doing. Cackling, as we sometimes do in the presence of those fellows gifted with wit beyond measure, we continued chatting way after the resort staff switched off the lights by the rooms.

– Now is a good time to mention that this inclusive resort was built to accommodate patrons without disturbing the flora or for that matter, fauna. This design meant that the resort wasn’t gated, and some of the cottages (ours, in this case) stood right at the edge, facing the uncharted (by us) forest –

As we chatted, the six of us suddenly felt a presence in the darkness, the low rustling of leaves caught the attention of a particularly paranoid fellow (me). At that point, we were all sufficiently unsettled. Nevertheless, “forging through ambiguity” like we’ve been taught, we valiantly peered at the source of the noise, while safely huddled on the (unguarded) stoop.

Lo, who could it have been but the cunning cousin of the city pig – a wild boar!

Now, you might say to me: it’s unfair of you to associate derogation like “cunning” to wild beasts; they are amoral, after all. 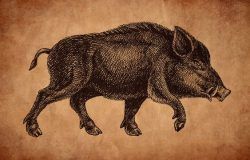 Not this one. There was something about this rotund chap that couldn’t be trusted. He wasn’t like his other porcine pals, sauntering around during the day, unconcerned and happy. There was something far more insidious about this one. He didn’t move when he saw us. Instead, he proceeded to be completely still, his spiky Mohawk twitching menacingly (or so I imagine, it was really dark). The humans on the stoop had promptly proceeded into the room (much to the wrath of some slumbering fellows), and huddled by the door to see if the boar had moved.

Friends, I swear on the feasibility of my project proposal, what transpired left some of us shook. The foul beast was steadily but surely charging towards us. The gall!

In that instant, I realised that the comics I had read as a child had lied to me. Wild boars do not, in fact, fear numbers. There were seven full grown humans and one rowdy boar. He managed to scare all of us, with the sole possible exception of one fellow whose calming reassurances that we would be fine fell on deaf ears.

The seven of us then split into groups of three and ran helter-skelter around the resort, flinching at every small sound. We ran into a couple of fellows further away from the epicentre of the apocalypse and managed to scare them to contentment.

The pinnacle of the night for me had to be when the damned beast scared a fellow (I won’t name names) into anxiety induced flatulence. This was only triumphed by the moment when one of us loudly declared:  “I’M SORRY, I DON’T WANT TO BE HOG MEAT” at another fellow who was trying to calm us down.

We all agreed though, we didn’t want to be hog meat. Of all the great gifts my home state Karnataka had to offer, I’d have been particularly distraught if a bunch of AIF Clinton Fellows were mauled to death by glorified bacon.

Sarala and I inched our way stealthily to our room, our legs shaking and went to bed. We laughed about it after. Oh, everything is lighter when dawn breaks. Even the boars seem jaunty by day…

One thought on “Of Boars and Babies (Part 1)”